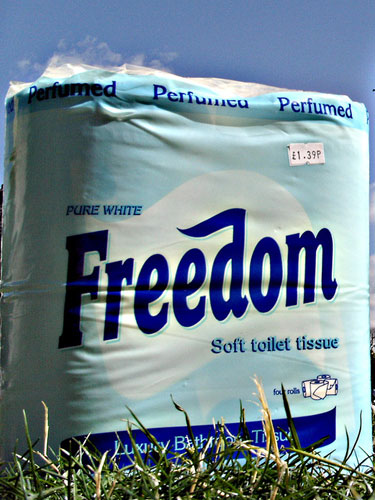 I have been freelancing fulltime for 10 months now, and I ain’t broke yet! Working for myself has been fun/exciting/freeing and stressful/boring/frightening. Regardless of what adjectives you use, it has also required math skills and free wifi.

I have learned how to prepare estimates, to charge what I’m worth, and to keep detailed records. I bring up work at any dinner out so I can write the meal off on my taxes. I’ve overcome my telephone anxiety (for the most part), run a meeting all by myself, and I’ve pitched my business in ten seconds or less at networking events.

I still haven’t figured out a long-term health insurance solution, and sometimes I get lonely or bored and don’t work as hard as I know I should. But I also get to shop for groceries in the middle of the day in my flip flops. And I can jet down to Louisville to meet friends on a weekday without having to ask anyone’s permission to do so. It balances out.

Overall it has been a great decision, the right decision, and a decision I’m proud I was brave enough to make. However, it has also induced a minor personal crisis. Once you realize you are free to do anything with your life, it becomes pretty damn overwhelming to figure out what to do with your life. I feel like I’m reading a menu with a thousand entrees and I’m paralyzed, not knowing what to order.

When I was working for THE MAN, I would often sit at work wishing I were not at work. And when I wasn’t at work, I was often too exhausted from work to do the things I’d wished I was doing when I was at work. It was easy to think that if I had complete control over my life, this paradoxical problem would be solved. However, now that I call all the shots, I’ve found that this isn’t so. I still have moments when I glare at my computer, frustrated by a Javascript bug. Some days I feel unmotivated to complete jobs which I have chosen to take on. I am happy for a greater percentage of the time, but I’m not happy 100% of the time. Except now there is no corporate headquarters to damn, no misguided leadership to bash, and no one to blame for anything but myself.

The Buddhist dieting book, “Savor,” which I recently reviewed, said that many people are carried through life by their “habit energy,” like a rider on a runaway horse. I’ve certainly felt trapped by the force of my habit energy at times, which might manifest itself as a job or a relationship or another element in my life. But it can also be comforting to be trapped, because you don’t feel the weight of responsibility that comes when you have to make choices. Sometimes the best thing about a mindless job is that it’s mindless. If you’re not in control, nothing is your fault.

So, here I am, ten months later, and I feel like I’ve already begun to slip into a new stream of habit energy. This time it is the habit of my self-employment. I wake up at 8:30, make coffee, eat oatmeal, and watch the end of Good Morning America. I push Java Bean out of the office and close the door. I check emails and figure out what I need to do today. I’ve become comfortable communicating with clients, keeping the books, and getting work done. For the first six months it was exciting and interesting and new, and now that it’s more comfortable, I can’t distract myself with it as much. I find myself asking, “OK, now what?”

I’ve always hated that question. “Now what?” I don’t know what! Stop asking! I KILL YOU! In high school, it was, “Where are you going to college?” In college it was, “What’s your major?” After college it was, “Do you have a job?” It just never ends. Once, I literally started hyperventilating when a friend asked me what I was planning to do after I graduated. One of the things I liked about my weight loss was that it gave me a project to focus on for two to three years. I killed time at work during the day, but all I really cared about was walking, cooking, and blogging about it. After the weight-loss, I made book writing my big project. And after the book writing I got a never-ending headache and had a bit of a breakdown, partly because of the pain and partly because I didn’t really have a project. I suppose visiting doctors could be considered a project, but it was a crap project, like a book report a teacher had assigned on a topic I hated. Then I got my shit back together (mostly), and made book writing and freelancing my projects.

And now…I am project-less again. I turned in my book manuscript in January, but it’s not due to be published until next year. I’m still blogging. I’m still freelancing. I have one or two ideas simmering on the stove. But I don’t really have a project I feel passionate about like I have at other times in my life. I miss that sense of forward motion. I miss feeling fired up about something. And I’m not really sure how to get that back. I guess you don’t go back, you go forward into something else. What? I dunno.

I’ve asked myself the old question, “If you could do anything without fear of failure, what would it be?” My answer is: Travel, meet interesting new people, and build a supportive community of friends. I’ve been traveling more this year, but I’d love to travel around the world. Sadly, that costs money I don’t actually have. So I’ve been turning that idea around in my head, thinking that if I were only a bit more clever I could figure out a way to make that happen without declaring bankruptcy or working a well-paying job I hate or abandoning my cats. So, that stands as a puzzle that I am still pondering, trying to fit the pieces together to make the picture I want. And even if I do get the picture I want, I might discover I don’t actually want it when I get it. Or I might want it for awhile and then need something else. Always something else.

I’ll be turning thirty in late October, and I’m quite proud of how far I’ve come this decade. It’s been the personal-growth equivalent of running an Iron Man. I used to literally stare at walls instead of chatting with people, but now I can make small talk and network like a socially competent individual. I used to be super-fat, and now I’m just sorta-fat. I could not fathom the possibility of running my own business when I was in college, and now I’m working for myself. It’s been good, but now I’ve got to figure out what to do with the next thirty(?), forty(?), fifty(?) years or more.

Any boredom I’m experiencing can probably be blamed on lack of imagination on my part. Sometimes I think, “Life has been good, but how am I ever going to fill the next few decades?” I know this is a stupid question because it is a big huge world and I’ve only seen an itty, bitty piece of it. There is enough stuff out there to fill a hundred lifetimes. There are over six billion people I could meet. But when you have that many possible choices, it can be hard to choose just one thing at a time. Sometimes it’s easier to blame a job.