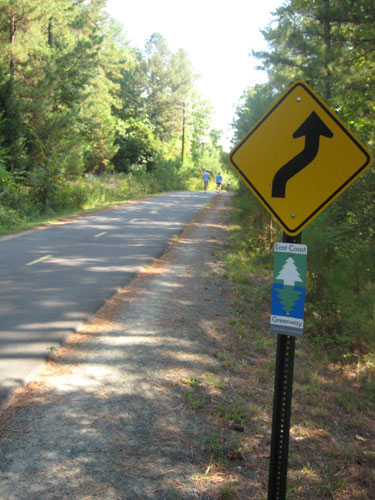 Normally when I take a vacation, I take a vacation from exercising too. I know I’m not supposed to, but eh, I’m on vacation and I’ll do what I want. However, I’m gasping through running the IrishFest 5K on Saturday morning, so taking a week off before the race would be a very bad idea unless I owned an Irish wolfhound to carry me across the finish line. (I don’t.)

I’m visiting my brother and his wife, and their house is near a trail that was built on an old railroad line, much like the Happy Fun & Fitness Trail near my old apartment is. This trail is amazingly similar to my Happy Fun & Fitness Trail, except for the little things that make it seem like a cloning project that went slightly awry. This trail has more curves and moves up and down on the z-axis creating something I’ve heard are called “slopes.” Us Indiana folk are not familiar with these “hill” things. Thus the huffing and puffing increased cardio workout. I nearly stumbled over a turtle on the side of this trail, which I’ve never seen on the trail in Indiana. Also, the people here seem to be friendlier than Hoosiers. I got Hello-ed at least three times during my 25-minutes on the path by a mom with a stroller, a white-haired walking man, and a twenty-something with a UNC t-shirt. Must be that Southern hospitality.

Many people have been bemoaning the end of summer, but not I. Summer always feels too hot for me, so I welcome the cool relief of autumn, which is probably why fall is my favorite season. In the past few years, I’ve realized that with fall comes perfect running weather. It’s just chilly enough that I can run in a t-shirt and not become overheated. The sun isn’t beating directly down on me, slowly causing skin cancer. And unlike winter, there is still a fair amount of daylight in the morning and evenings giving me flexibility on when to run.

I like the fitness room in my apartment complex a lot. It’s much nicer than the fitness room at my old apartment, which was located in a carpeted room that looked like it used to be part of the lobby. The new fitness room has mirrors on the walls, more machines, and overhead fans. But whenever I run on the treadmill there I get really hot and sweaty. It’s so much nicer to run outside in cool weather because the sweat on my skin evaporates in the breeze instead of soaking into my shirt like at the gym.

I only wish there was someplace nice to run outside around here. I miss the trail! There is a little path near my apartment that is only 4/10 of a mile long which is sufficient for running outside, if also insanely boring. I have to run back and forth on the same stretch of pavement several times. Sometime people are fishing in a pond right next to the trail, so I feel rather silly running back and forth past them. I’m tempted to wave and yell, “Yep, it’s me again! I’ll see you again in about 6 minutes!”

I’ll try just to be happy that I am still running. I have a 5K in less than two weeks that snuck up on me. I’ll keep running indoors or outdoors and hopefully I’ll be ready in time!

In June I tried rendezvousing with my mother to visit the tea room when I was detoured by the gay pride parade. Last Saturday, I drove downtown to take part in the Cultural Trail bicycle tour and couldn’t get past the roadblocks for the Circle City Classic parade. How many parades does this city have in a year? And is there a parade warning list I can be put on to warn me the next time a marching band stands between me and the parking garage?

Despite the barriers, I was able to drive downtown, pull my bike out of the trunk and figure out how to properly reattach the front wheel in time to make it to the bike tour and without suffering massive braking failure. The Indianapolis Cultural Trail is a project I discovered because of my recent Starbucks addiction. Whenever my coworkers and I escape from our cages to pay too much for coffee, we walk past signs saying “Cultural Trail.” One day, there were even men jackhammering designs into the road which were later painted bright colors to denote the trail. All of this made me wonder, “What the hell is the Cultural Trail?”

I visited their website and discovered the trail is “a world-class urban bike and pedestrian path that connects neighborhoods, Cultural Districts and entertainment amenities, and serves as the downtown hub for the entire central Indiana greenway system.” I also signed up for their newsletter and learned that they offered bike tours at the beginning of each month from April through October. I was curious, and I was looking for new and interesting ways to stay active, so I signed up.

A group of about 15 people met in the parking lot of the Central Indiana Community Foundation and I could tell I was in the right place because Gail, the organizer, had a big map of the trail. (She also had a mandatory waiver I had to sign in case I hadn’t reattached my front wheel as well as I thought I had.) 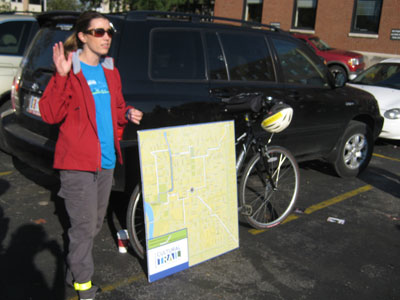 Her husband, Brian, president of the Central Indiana Community Foundation and founder of the Cultural Trail, showed up soon afterwards to lead the tour. Since only about 5 blocks of the trail have been built, most of the tour involved biking around downtown and visualizing how pretty the trail will be when it’s all done. It was like a realtor showing you a house and telling you to envision yourself living there, even though it’s all drywall and carpeting for now. 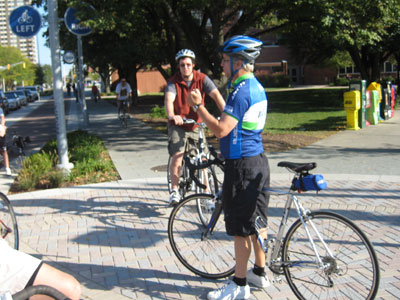 I had a lot of fun on the tour, whizzing through parts of downtown I would never bike down alone for fear of traffic. It also made me excited for the day when the trail is done. Here are some highlights in bullet points so I don’t have to think up paragraph transitions:

Near the end of the tour we had to ride back to the parking lot, but our route was directly blocked by a marching band. We biked through a park trying to cross over, but then had to backtrack. I don’t know what the mostly black attendees of the Circle City Classic thought of the 15 white people on bikes who rode through their festival and almost became part of the parade. I only hope we drove fast enough that they didn’t get a good look at my face.

When we got back to the parking lot, I won a t-shirt because I have a birthday this month. Woo-hoo! Go October! I was much happier with this than the other prize, a bag of Cultural Trail mix, which looked delicious, but I would probably have scarfed down all at once and felt guilty about later. They sell the mix at The Best Chocolate in Town on Massachusetts Avenue and $1.00 of every bag is donated to the Cultural Trail fund.

The trail is privately funded, but right now they are concentrating on finding $1-million-dollar level donors. If I had that much money lying around, I’d be happy to donate because I love this city’s trail systems and I’d love to be able to bike around downtown more easily. I’ll have to wait until they start taking donations like the $20 in my billfold to help finance the project. I’ve noticed that projects like these don’t just happen, they have advocates, usually only one or a couple people who are really focused on getting the project completed. I don’t have the energy to deal with all the bureaucracy that a project like this would stir up, so I’ll just give money instead when the time comes :)

Then my brain kicked in and I realized I’d just run past a water fountain, which the woman probably stopped to drink at after she passed me, considering that is was 86 degrees with 53% humidity after all. Heatstroke averted, brain A-OK, if operating at slower levels.

It did make me momentarily wonder if an earlier moment during my run had also been a delusion. I wasn’t a quarter of a mile down the trail when a shirtless, barefoot man wearing nothing but ripped jeans and naked sex appeal walked straight across my path. He had shoulder-length, brown hair and 6-pack abs. I had to look around for video cameras to make sure I hadn’t run into a Calvin Klein commercial. If I owned a video phone, I could have shot their next ad right there. Then he walked off towards the street, probably to his car. It was like a Bigfoot sighting. One moment he was there and then he was gone and I wondered if I’d really seen him at all.

But it’s moments like those that make me glad I exercise.

Yesterday morning I ran on the trail for 45 minutes. Forty-four minutes of this time was spent thinking, “Yippee! After today and Saturday, I will never have to run 45 minutes again! Except for that half-marathon thingy, of course, which is two and a half hours long, not 45 minutes, so it doesn’t technically count.”

The other minute of this time was spent thinking, “Holy crap, I just swallowed a bug.”

As I began singing that old kid’s song about a lady who swallowed a fly, I wondered if this meant I would now have to eat a spider to catch the fly, and then a bird to catch the spider, and then a cat and a dog and a goat. I don’t even know where to find a goat in Indiana. And dear Lord, how badly would all this eating wreck my diet?

Luckily, I hadn’t actually swallowed the bug, just caught it in my teeth as I was plodding down the trail panting with my mouth open, so I spit it out into my hand. It was green. I sighed (panted?) in relief as I realized it wasn’t a bug, just a teeny, tiny leaf like one of several scattered on the trail. No bug-eating for me. I’ll get my protein elsewhere.