Both my mother and my father called me over the past two evenings to check that I was still alive and not crushed under a pile of rubble left in the wake of 25 tornadoes that swept through North Carolina this weekend, the most in 27 years. (I think they followed me here from Indiana. Sorry, everyone!) I found their calls reassuring because as a single woman living alone who works from home I sometimes wonder how long it would take for someone to notice that I was dead if I were to choke on a peanut butter and jelly sandwich in my living room. I think the answer is less than a week, but by that time any felines in my house would have assured I’d need a closed-casket funeral.

WordPress entries can be scheduled in advance, so my Monday post (which was indeed written and scheduled last week) wasn’t definitive proof that I was still alive, but hopefully this post is. I could take a picture of myself holding today’s paper to visually verify it, but who buys the newspaper anymore? 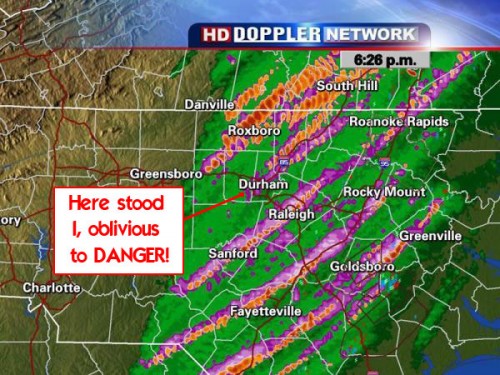 Chapel Hill wasn’t hit that bad because we’re just west of the path the tornadoes took. In fact, when I turned on the TV on Sunday I was completely gobsmacked to see how much devastation had been wrought across the state. In comparison, my biggest inconvenience the day of the storm was that I had to wait two hours for the rain and thunder to pass before I could go shoe shopping. And miles away people were grateful to escape with their lives, so yes, I was the totally shallow nitwit in this scenario. In my defense, there were a LOT of people at the mall that day, so I’m not the only heartless and/or oblivious consumer out there.

On a more serious note, many people died in last weekends tornadoes and many more lost everything they have. You can find information on how to donate to those in need on this page. 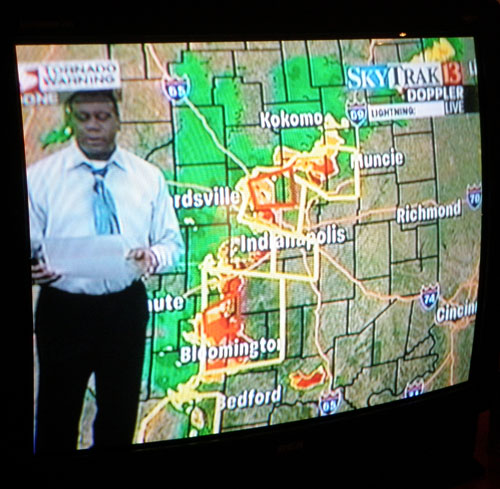 Last night I’m watching TV when Chris Wright breaks in to tell me there is a big red blob heading for Indianapolis. (True, he’s no Dallas Raines, but we make due with what he have here in Indiana.) He’s got the Doppler radar. He’s got the tornado warning graphic in the corner. He’s got little yellow boxes outlining the storm systems. He can zoom in and forecast the path of the storm. He can tell you when it will hit every little city, right down to the minute.

Then suddenly this downspout of weather information is interrupted by: 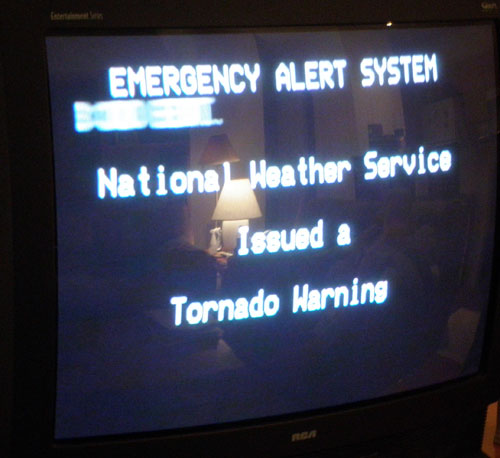 A big black screen with big white text and an awful bleating sound similar to those vuvuzelas at the World Cup. After a pause, a robotic male voice starts to speak with the broadcast clarity of someone talking on a cell phone in a tunnel. I’ve gone from getting the best weather information 2010 can provide to getting the best weather information 1970 can provide. My question: WHY DO THEY DO THIS?

I understand that the emergency alert system is supposed to warn people of imminent danger and get them to run for the cellar or hide in the bathroom when necessary. I’m going to assume it was created in an effort to help people. But when it breaks in on my super Doppler broadcast, I don’t see how it’s helping me. If I needed to take cover, Chris Wright would let me know. Weather people LIVE for these kind of storms. They love bragging about their coverage and their fancy radar in promotional ads for the station. In this situation, it seems like the Emergency Alert System is doing more harm than good.

So, someone please explain this to me. What am I overlooking that proves the EAS on TV helps people out? There’s got to be a reason, right?

Suddenly the only light in my apartment was the glow of my widescreen monitor and a beeping started counting down the minutes until the battery in my power supply would die out. It was only 10:00pm on a Saturday and I wasn’t ready to go to bed.

“Well then, I guess I have absolutely no reason to do Pilates!” So I did, in the dark, by the light of my Dynamo Radio/flashlight. It was the free gift I got for renewing a credit card membership, which is way cooler than the pedometer I got last year. If the apocalypse ever comes, I won’t have to raid convenience stores for AA batteries to see the demon spawn of hell attacking. I can just hand crank the battery charger myself! 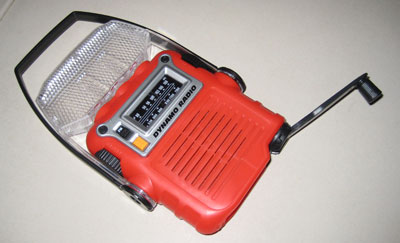 I’d been avoiding working my core that day because my core was sore. I let my exercise routine slip during my book promotions and when I started doing Pilates again last week it hurt to laugh the next day. But I didn’t want to try reading by flashlight, and I couldn’t watch TV or work on the computer, so Pilates it was. Power outages = good for my health.

I rolled out my mat and went through my routine by the dim glow of flashlight. I tuned the radio to a station playing U2’s “I Still Haven’t Found What I’m Looking For.” It was all very serene and meditative – until the DJ’s started talking about fake eyelashes. For over five minutes. I didn’t know you could talk about fake eyelashes for that long, so I assumed they would get back to the music. But they didn’t. After hearing brand comparisons and learning that you should trim the edges of the cheaper brands because they weigh the eye down, I decided I’d had enough of this personal hell and turned the radio off. I finished my Pilates in silence and then went to bed.

I later learned a tornado touched down on the east side of town, so I was pretty lucky my roof didn’t get torn off while I was doing The Plank. Which you think my radio would tell me about, but tornado warnings evidently aren’t as important as the length of my lashes.