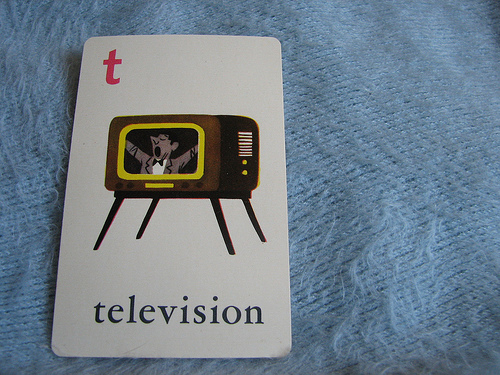 Back in the year 2000, I started watching a TV show called The West Wing and loved it. That was the good. The bad? I started watching from the second season premiere and we had no Hulu, no Netflix, and no BitTorrent for me to watch the first season. It was the dark times, younglings. (We did have IRC sharing channels, newsgroups and FTP queues, but we also had dial-up*. Oh, dial-up.)

So, what was a girl to do? Well, she got on the interwebs and got a fan to send her ten VHS tapes containing copies of copies of the episodes. Shipping cost at least twenty dollars and thirty seconds of one episode was overridden by a California emergency weather alert, but they were watchable and that’s what we had, so we made do.

But now, now we have DVDs and Netflix streaming and life is good! Life is fantastic! Now entire seasons of television shows are available to watch in binge marathons on the weekends. It has transformed the way I watch TV, no longer parceled out in bite-size pieces every week, but watched as a detailed season-long story arc. You don’t want to read a chapter of a book every week. You want to read the whole book at once, and that’s what is possible now, which is what’s great. And I love it, because I think the televised season-long story arc is one of my favorite forms of storytelling, if not the most favorite. (So says the book author who reminds you to love books and buy books, especially my books!)

A season of a television show gives you more time to meet the characters, tell the stories and flesh things out. When I compare Friday Night Lights the movie and Friday Night Lights the television show’s first season, the TV show wins. Both have excellent production values and great acting, but you can tell so much more story with umpteen hours of TV than you can in two hours of movie. And you can tell it’s good because I do not care an iota about football and still love that show.

It seems like TV is looked down on as inferior to movies, but I don’t think that’s a valid stereotype. The quality of TV shows has gotten so good in the past few decades that they’re just as good if not better than many movies. You’ve got accomplished actors of stage and screen appearing in shows, like Laura Linney in “The C Word” or Anna Paquin in the hit “True Blood.” And now with our smartphones and media players, it is becoming less important where you watch a show. You can watch it almost anywhere.

I love good TV shows. I love that I can watch them in my house and not at a theatre with chatty couples and the distracting light of someone texting in the second row. I love that there is so much more to devour and enjoy than in movies. I love that the characters continue to change and grow more than they typically have space to do in films. I love talking about TV shows with my friends. I love TV!

And I love that TV comes on DVD, so I don’t have to wait through commercials. I love that it’s available online, legally, so I don’t really have to pay for cable if I don’t want to. I particularly love it when I discover a great show after it’s been on the air for five years. Then I get to watch seasons of it back to back, not waiting long summers for the resolution to cliffhangers. So thank you DVD and the Internet. And thank you TV!

* If you don’t know what any of that means, don’t worry. You don’t need to and it probably means you actually interacted with human beings as a teenager.