I flew 4000 miles to London and took a two-hour train ride to Paris to find myself back at Indiana. 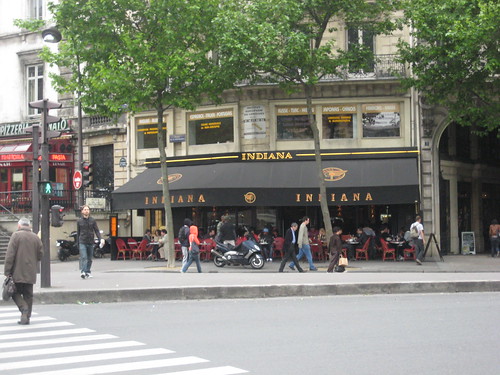 This is the restaurant that greeted me as I emerged from the metro station near my hotel. There’s a Kentucky Fried Chicken and a McDonalds on the square too. The McDonalds serves Kit Kat McFlurries, so at least that was worth the trip. One item that didn’t make the trip from London to Paris was my universal power outlet converter which allows me to do silly things like recharge my camera battery and write these travel blogs on my computer. To the person who discovers my outlet converter in a socket at the Eurostar station in London, have fun plugging in worldwide, my treat!

My mind had been on other things, like OMG WHERE IS MY RAIL PASS I JUST HAD IT A SECOND – oh it’s in my other pocket. I’d also spent five minutes wondering around Marks & Spencer’s before I left Britain trying to find anything I could buy with the 42 pence the currency exchange bureau didn’t think was worth converting. I’d tried the small pharmacy stand, not I couldn’t even afford a pack of gum due to marked up prices. Wow. My choices at M&S were either a huge bottle of sparkling Scottish water or a M&S candy bar. I will leave my final choice unknown to keep some mystery in life.

As the train sped off for Paris, the air pressure in my ears kept popping. I was saddened that they didn’t tell us when we were entering the Chunnel. It just got dark for a long time and I figured we were going under the water. Then I don’t remember much of anything because I took a nap, but became fully awake when I was wondering around a train station where all the signs were written in a language I only 20% understand and spent 15 minutes figuring out the Metro ticket machines. I finally solved all the puzzles and arrived at my Metro stop and then walked right by my hotel without seeing it, just like I’d walked by the tea shop the day before. I truly go out of my way to get lost.

But there I was, digging through all my luggage, and my power adapter was NOT there. It couldn’t be hiding anywhere in my closet room, because the bed fills up literally half the floor and the bathroom really puts the “closet” in water closet. As I realized my power converter was not there, my autonomic nervous system started to rev up like one of those black scooters I’d seen all over town. I told myself, It’s ok. You can buy one, and if you had to lose anything that was better than your passport or credit cards. Only I didn’t know where in town to buy one and I needed to do it soon or else I’d have no digital images of my travels to make people at home madly jealous of me.

I stepped outside to go to the Metro and I was wet. It was raining. I went back inside and got my hat. Then I went to the Metro station and inserted my ticket in the turnstile. The doors did not open. The machine at the station I arrived at only took coins and I only had enough coins for two tickets. I had left the other ticket in my room because I thought it was the used one. There were no ticket machines in my current station. I walked back to the hotel and got my other ticket, a flimsy rectangular slice of paper with a magnetic strip running down the back. I saw discarded tickets on the subway floors and longed for the easy plastic rectangle of familiarity that was my London Oyster card. Finally, I got on the subway and got on the train and arrived at the station near Notre Dame, my first stop. Thankfully, the rain stopped, which I’m sure the people at the bread festival on Notre Dame’s front lawn appreciated. Or it might have been a pain festival, but there was bread inside, not iron maidens, so I think it was a bread festival. 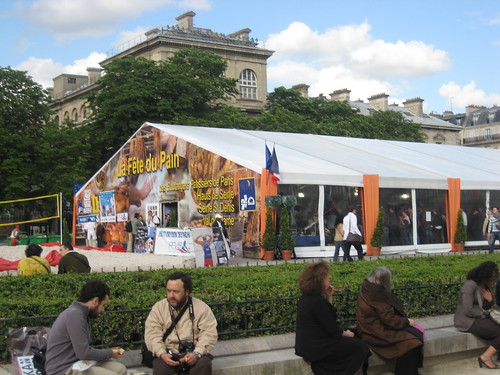 As I walked for the three arches above the front doors, I saw a booth for the tourism office, so I decided to buy a 2-day museum pass which allows me to see lots of museums for the price of the card and lets me skip ticket lines. Ben was very nice explaining the pass to me and I liked him a lot until I smacked face first into the language barrier and he charged me for two 2-day passes when I had wanted only one.

“The machine doesn’t let us do refunds here. You’ll have to go to the tourism office.” My autonomic nervous system loved to hear that. I tried not to let my primitive brain know that I was also worried about finding an ATM to get some Euros, because I knew that would cause me to seize up right next to the crypt, where they would conveniently bury me.

Ben wrote down the address, marked it on one of the fifty maps they had in the booth, and told me to get off at the Pyramids Metro station. I walked to the nearest station and gazed and stared and focused on the Metro map, but I could not find the Pyramids station. The Paris metro is far more confusing than the London tube, and not just because it’s in French. Fuck this. I’ll just walk. And that is how I found myself walking past Le Forum des Halles and the Opera House. 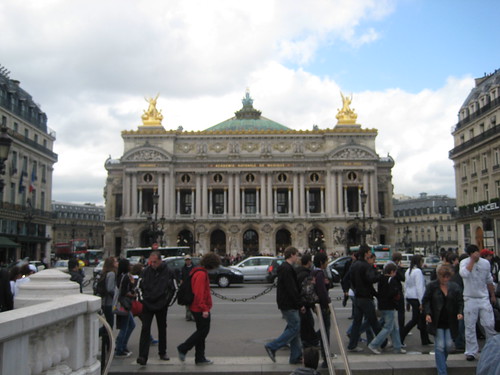 This is also why I was walking the streets of Paris muttering to myself, “Stupid fucking Paris. Why am I visiting a city where I don’t speak the language? And why did I think I should do this alone? And where am I going to find an ATM that will accept my card? And where the hell am I going to buy a power converter? And how does the stupid fucking train system work?” But at least it wasn’t raining.

I told myself to go with the flow and not struggle too hard to make my scheduled itinerary for the day. “What will happen, will happen,” and other tautologies like that repeated in my brain. I finally found the tourism bureau, after walking right past it even though they have huge letters in the window saying “PARIS TOURISM.” They had the credit card machine that could refund my extra ticket. They also explained the train passes to me and could sell me one, so I shelled out for the 5-day, 3 zone, pass just so I wouldn’t have to bother with those stupid, disposable tickets anymore. Then they told me I could buy a power converter at the Monoprix department store which was just around the corner and not a mile away like the tourism bureau had been. Big props to the staff of the tourism bureau! Luckily, I also found an ATM on my way and stuffed hundreds of Euros into my pants. After I bought the converter all the stress items were crossed off my list, but it still took my body another 30 minutes to get the message and chill out.

I found the Pyramids metro station, which was on the map, just hard to find because of all the other lines and dots and colors, and sped back to Notre Dame by 4:30, starting my planned activities for the day even though the day was mostly over. 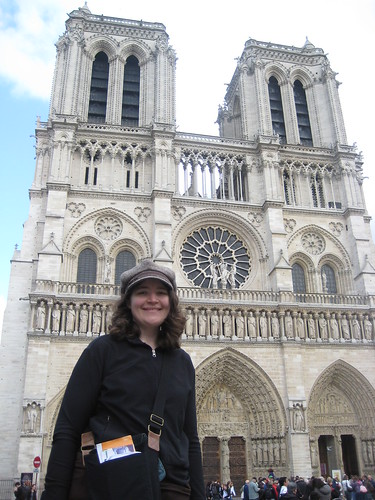 Notre Dame is beautiful and ornate, but I had mixed feelings about how tourist-y it is. At Westminster Abbey, they forbid photography, which annoyed me when I was there, but now I appreciated the flash-free environment it created. It seems like people are so insistent on capturing a moment with their cameras that they forget to be in the moment and experience it now, not when they’re looking through a scrapbook. I also wonder what the builders of the cathedral would feel if they knew the building they worked so long and hard to create was now not primarily a place of worship, but a place for a gift shop and souvenir coin machines. 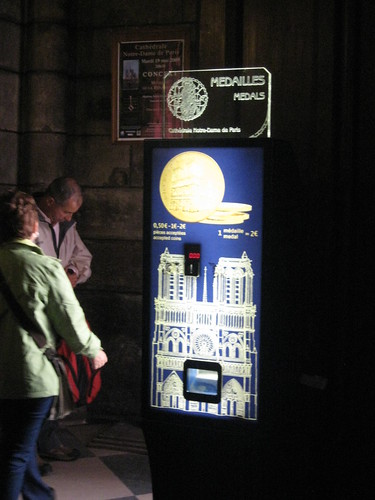 I followed the Rick Steves Guidebook’s historic Paris walk, which was quite informative and led me to lovely parts of the city I didn’t know about and wouldn’t have found otherwise. I particularly liked the street next to St. Severin’s which was filled with quaint cafes and shops. The same vibe flowed into the St. Michel area and I found myself feeling a mild hum of euphoria over the aching of my feet as I walked down cobblestone streets with people of different nationalities and reading signs in foreign languages. This was a foreign country in a way that Britain wasn’t. It was more foreign than foreign.

I walked past Sainte-Chapelle, a church with marvelous stained glass windows. Next there was the Palais de Justice, a quaint park grove called Place Dauphine, and a park at the point of the island called Pont Neuf. I walked back to Place St. Michel and bought a falafel even if my French sucks. (My apologies to my two college TAs. I should have paid more attention.) I went back to the little island behind the bigger island Notre Dame is on and had some Berthillon ice cream. I had another 45 minutes to kill before the Seine boat site-seeing cruise I’d bought a ticket for, so I ordered a hot chocolate at a cafe and the waiter sat me in a table with this view. 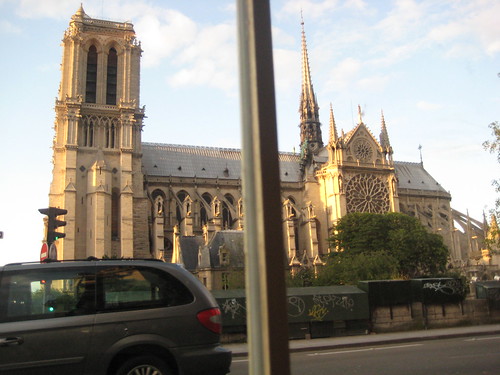 Then it was on to the twilight cruise, which was beautiful but cold because both Paris and London have required a sweater I did not pack in my carry-on. Like at Notre Dame, my stomach felt a little weird as I saw a luxury cruise boat full of people eating dinner sail by a row of tents on the pier which I assume are for homeless people. Then we circled by the Eiffel Tower which was alight and towering like its name. 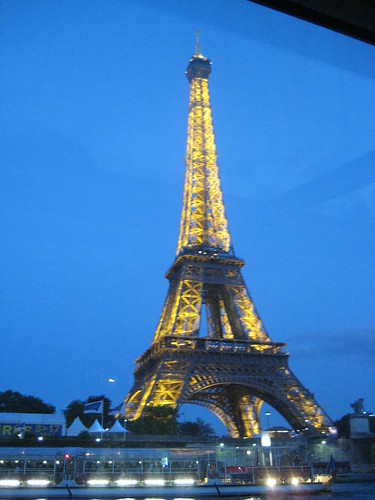 Finally I walked home to the Metro and back to the hotel feeling like I’d seen Paris, not all of it but enough. If I only had one day, this one would suffice, anxiety and unexpected disasters included.

Then I let my computer run all night and uploaded a bazillion travel photos to Flickr, no doubt annoying anyone else trying to use the network. Enjoy! I should warn you that these journal entries are being posted one day after everything that happened, so don’t be confused when you see pictures of Versailles in my stream and wonder why I never mentioned the hall or mirrors. There will be more photos to come now that I can charge my battery.