It took me eleven years to knit this scarf: 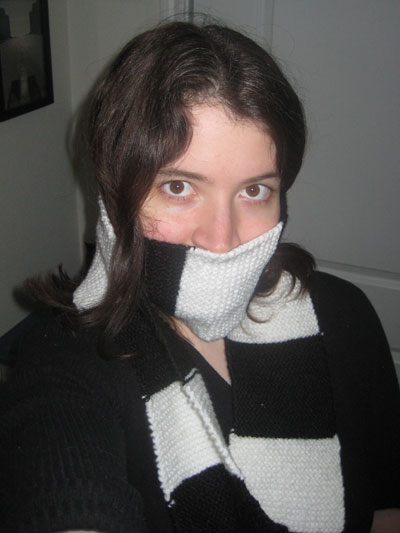 There was a knitting craze at a summer camp I attended in the summer of 1997. One of the groups learned how to knit squares that would be sewn together to make a blanket. As a result, you’d see girls and guys all around campus bent over their knitting needles. I wasn’t in the knitting group, but I decided this was a good opportunity to learn how to knit, so on Parent’s Day we went to Wal-Mart and purchased some needles and yarn. That year I made a really ugly blue scarf.

Once I got home, I wanted another project, so I got some black and white yarn to make a scarf like Mark wore in my favorite, hot, new musical at the time: Rent. I hoped to finish it before going to college, but I got bored with it after a few color changes. So, the scarf was stuffed into my craft box, that I toted along with me to the next four houses and apartments I lived in. Sometimes I pulled it out and worked on it for awhile, but I never managed to finish the darn thing.

Then, this weekend, I was cleaning out my craft box, saw the scarf and decided enough was enough. I pulled out my Stitch N’ Bitch book, read the section about binding off, and finally evicted the scarf from the knitting needles it had called home for over a decade.

Now I am left with a sort of lumpy, scarf with an inconsistent width. I should probably throw some tassels on at the end. I don’t think I’ll actually use it. I’m just glad it’s done.