I think it’s odd that I have a PO box. When I was a kid, PO boxes were only mentioned at the end of commercials for Topsy Tail or Picture Pages. They didn’t seem like things real people had. Yet, now I have one and I’m pretty sure I’m a real person. It was really easy too. Last year I went to the postal counter, asked for a PO box, and they gave me a key and an address after I handed them my credit card. Credit cards are like magic wands.

It’s kind of fun to check my PO box because I never know what will be in there. Sometimes it’s a bait and tackle catalog addressed to the previous owner. Sometimes it’s a nice letter from a reader. And sometimes its an ad for a retouching service that promises that you’ll “look great in your summer pics,” though by “great” they mean “less like Porky the Pig.” 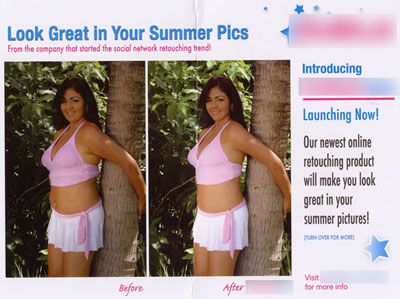 I’ve blurred out the company’s name because I’m not sure what to think about their service. I don’t want to promote them or unfairly bash their name. My first reaction was to be insulted by the implication that I needed to be retouched. Then I read the text on the back of the card which says, “Our new xxxx service is just what Half of Me Blog fans need to look great in their summer pictures!” Oh, so I don’t need to be retouched, it’s you guys, who are evidently too fat to appear in your own summer vacation photos.

But before I get up on my high horse and lead the cavalry to raid this evil domain, I have to knock myself out of the saddle because I myself am guilty of retouching a photo I thought I looked fat in. (Except it was an autumn photo and I didn’t have to pay anybody to do it for me, so it’s totally different situation. Totally.)

I believe everyone has a right to like their body, no matter what size it is. However, I also know what it’s like to see a photo of yourself and dislike what the pixel sensors pick up. I wish people didn’t dislike those images so much that they felt the need to tell a lie with a picture. But of course, I was one of those people, wasn’t I?

In their defense, they also provide typical retouching services such as red-eye reduction and acne removal. The slimming service looks like a new product. What do you guys think? Is this service a force of good or evil or somewhere in between?