A lot of mice have gotten fat so someday we won’t have to. Scientists recently discovered that turning off a gene in mice’s genetic code caused them to stop producing an enzyme which caused the build-up of an amino acid which caused cells to make new proteins and then destroy them over and over again burning lots of calories without getting fat. Did you get that? Basically, some people have cells that do a lot of busy work that waste time and energy – just like your office job! But unlike sitting in front of a computer all day, this busy work keeps them thin. It’s a long way of saying that genes do probably play a factor in making you fat and yes there really are some people who can eat cake all day and not gain weight. You can find more information in the easy-to-read MSNBC article or the more detailed Nature.com article or if you have PhD in cell biology you can dive into the original paper published in Cell Metabolism. The MSNBC article I found funny in particular because it talks about fat fruit flies. How can you tell if a fruit fly is fat? Do you weigh it? Do you squash it to see if it leaves a really big stain?

Articles like this seem to come out every couple months, talking about proteins and enzymes and genes. Each article convinces me more and more that a hundred years from now obesity is going to be a medical oddity. All the weight loss blogs will go offline. Lane Bryant will go out of business. If our descendants jeans get a little tight (assuming they still wear jeans and not shiny moon pants), they’ll pick up a leptin prescription from their doctor. Then they’ll laugh about how silly it was that people used to diet to lose weight as they wash their pills down with a double-fudge brownie milkshake.

When I think of diseases like polio or small pox, they’re not threatening at all. When Nicole Kidman dies of tuberculosis at the end of Moulin Rouge,* I just shake my head and thank God for antibiotics. I don’t fear polio because it can be prevented with a shot, but just last century it could kill you or paralyze you for life. While I don’t think obesity is as bad as polio or small pox, it’s certainly not considered a desirable, especially when you get as fat as I was and you injure yourself walking up the stairs.

As more and more fruit flies and mice get fat and skinny in the medical laboratories in the world, eventually we’ll reach a point where obesity can be controlled through pills or vaccines or genetic therapy. It just won’t happen in time to do me any good. My loose skin is already here. It’s possible they might eventually develop a cure for aging too, but I’ll probably be dead by then. Which isn’t fair, but how many things in life are?

I’m sure an anti-fat pill would stir up a lot of controversy, but I can’t see much wrong with it. You could argue that it would give people an excuse to over-consume food when other areas of the world are starving, but that seems to be happening regardless. If worse came to worse, we could just rise the price of corn syrup. An anti-fat pill would be the diet equivalent of birth control. We use condoms and birth control patches so we can enjoy all the pleasures of sex without having 20 children or growing genital warts like cauliflower. An anti-fat pill would let you enjoy as much double-cheese pizza and strawberry cheesecake as you like without the negative side-effect of obesity. I have no idea if it would also lower your risk of heart disease or diabetes too, but if I’m making up magic pills lets just say that it does.

So, if there were a magic anti-fat pill that made your cells run in circles endlessly building and breaking down proteins, would you take it? I probably would, but I also think I’d eat healthy most of the time anyway. I feel so much better when I do. Back when I ate junk food all the time I often felt sleepy or moody. Though I have to wonder if I would ever have figured that out if I could just take a pill before eating a box of cookies. There are advantages to a well-balanced diet that have nothing to do with how fat you are. That doesn’t come in a pill – yet.

* That’s not a spoiler by the way. They open up the movie by telling you she’s dead. And she coughs up blood and foreshadowing all through the film.

I always run out of quarters to do my laundry. I hardly ever use cash these days, preferring to use plastic cards with magnetic strips to pay for all my goods. But unless I get my cat to start licking all my clothes clean, I’ve got to feed the washing machine its diet of large, circular change. So I found myself in a long line at the bank at 11:30 on Saturday morning along with several other people who were cashing their paychecks or answering their cell phones despite very strict signage that prohibited such behavior.

I picked up a copy of our weekly liberal newspaper to read as I waited. I flipped past all the ads for “island temple healing” (are there islands in Indiana?) and “European whirlpool and body massage” (is there something special about European whirlpools? Does the water whirl in the opposite direction?) to find an ad on the back page for a medical research study asking me, “Healthy, but Overweight?” I don’t know why they needed to capitalize “overweight.” Perhaps the weight that word implies necessitates the use of a huge, round capital letter as a visual cue about the size and shape of the individual it is describing. It paid several thousand dollars and I was beginning to lament the fact that they hadn’t been doing this study last year when I was still fat but eating lots of green things that grow in the ground and running regularly, which surely qualified me as healthy.

I’m still technically overweight according to my BMI though, so I was wondering whether I could sneak into this study and get some easy cash. I looked through the bulleted list of requirements. Male or female? Why yes I am! Age 18-65? Check. Tobacco and nicotine-free? I’m so boring I’ve literally never smoked a cigarette. Then I noticed this: 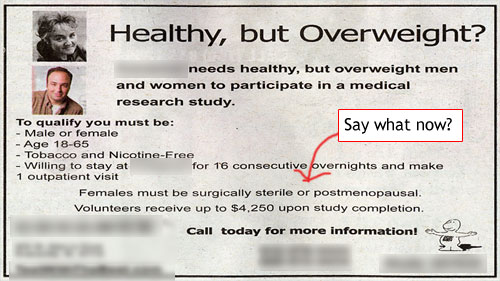 “Females must be surgically sterile or postmenopausal.” Say what? How are my ovaries an issue here? Exactly what are they going to do to these fat people? Maybe there’s a reason they’re paying $4,250 dollars, and it’s not the fact that you have to stay 16 consecutive overnights at their center. I read that the film director Robert Rodriguez earned $7,000 to finance his first movie by submitting himself to experimental drug studies, if the Internet Movie Database is to believed. But it also said he had two divots in his arm as a result of the procedures, so I guess the man earned his money.

I suppose it’s for the best that I am no longer overweight nor am I surgically sterile or postmenopausal, though I’m glad I’m still healthy. Otherwise the study would be mildly tempting. However, if you live in Indiana and are fat, healthy, and really hard up for cash, it evidently pays pretty well to be a lab rat.