I’ve bitten into chocolate rabbits. I’ve snacked on chocolate eggs. And if you live in New York, next week, you can see a naked, chocolate Jesus (or you can just visit the website here). I’m curious about how you go about making a confectionary sculpture of the savior. Do you make a big mold and pour the chocolate in? Do you start with a big block and start chipping away with a chisel or your front teeth? And how do you prevent it from melting?

According to the press release , the sculpture was supposed to be displayed last Easter along with several chocolate statues of clothed saints, meaning it’s at least half a year old. Whenever I’ve discovered an ancient chocolate bar in the back of the cupboard it has a dusty white film on it. I bet Jesus has a bad case of dandruff and scabies by now. According to the Wikipedia chocolate accumulates this white dust when fat and sugar crystals rise to the surface after improper storage. (Thanks to Chicken Girl for pointing me towards Sweet Jesus.)

And to prove that it’s not only Americans doing strange things with their food, South Africa broke the record for the world’s largest pumpkin pie this week, though I can’t find any pictures of their accomplishment. The record was previously held by the New Bremen Giant Pumpkin Growers in New Bremen, Ohio. They baked a 2,020 pound pie on October 8, 2005 and if I’d known they were doing that I would have hopped in my car and driven next door to Ohio to help them eat it. Pumpkin pie is my favorite pie by far. It tickles something in my brain that no feather can reach, sending jolts of tasty pleasure throughout my whole body. Mmmm. 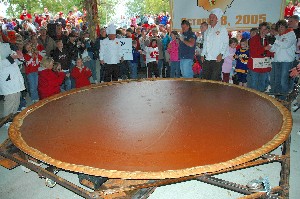 I find it fascinating that the New Bremen pie lost 200 pounds during the baking process. Wow! To think, I could have bypassed these past two and a half years of fat fighting if I’d just stuck myself in an oven for a couple hours. It’s a little sad looking at the New Bremen team’s certificate from the Guiness World Records. Do they get to keep that or do they have to shred it now that it’s been broken? Or do they just get their giant pie oven out of storage and try to break that record again?