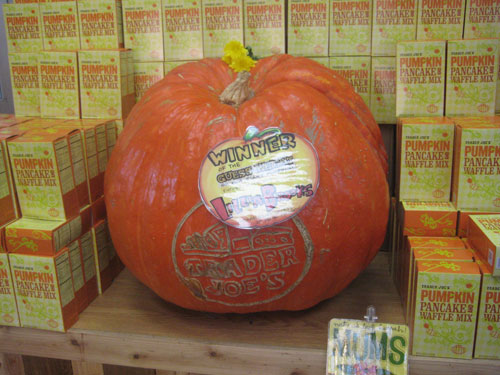 I am always disappointed that Trader Joe’s does not let you actually trade for items. It seems to be a great deception in regards to their name, just like Dress Barn isn’t really housed in a Barn and Burlington Coat Factory isn’t an actual factory.

It would be rather exciting to walk into Trader Joe’s and bargain with the cashier. “I will give you this never-used souvenir coffee mug from San Francisco for two boxes of blueberry oatmeal. What do you say?” What do you think I’d have to exchange for the huge pumpkin pictured above that was in the lobby of the Ann Arbor store?

Woah, did you know pumpkins could grow warts? 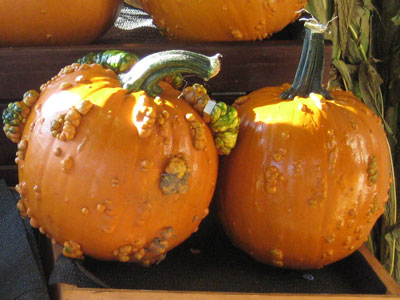 I walked into the Fresh Market yesterday and saw a pile of these ugly creatures in the corner past the sliding doors. I thought they must be the victims of a pernicious pumpkin disease, but according to this site they bred these knucklehead pumpkins on purpose. “In fact, it has taken over 10 generations of breeding to obtain the size and consistency of warting for these varieties.” 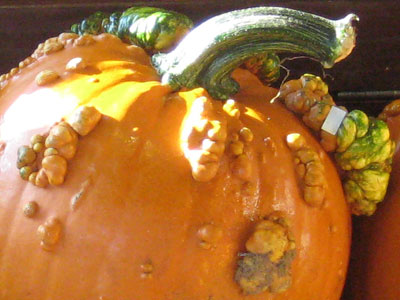 Now, I LOVE pumpkin pie and pumpkin cheesecake and pumpkin bread and canned pumpkin mixed with instant pudding mix. Pumpkin is my favorite squash. I love that it’s pumpkin season again. These pumpkins are probably just as tasty as their clear-skinned cousins. So, I know it’s looks-ist of me, but I want to take a knife or a bottle of liquid nitrogen and freeze the warts off that orange skin. It looks so gross.

But to each her own. I suppose someone must think these pumpkins look cool if they spent 10 years of their time on it. I won’t be buying any, but I won’t be buying any pumpkins after I spent over an hour last year chopping up a jack-o-lantern and boiling the pieces to make pumpkin puree. It was soooo not worth the work. Only canned pumpkin for me, for which I won’t be able to tell if it had warts or not.

God help me, but I learned something from Martha Stewart.

I don’t have anything against Martha Stewart, but I’ve never vibed with her either. She cooks quail eggs. What could I possibly have in common with someone who cooks quail eggs? But when I was out sick I watched daytime television. I don’t have cable, so I have about nine stations, six of them without static. After three cycles through the channels, I watched the last ten minutes of Martha as she made a pumpkin bunt cake. She scooped the pumpkin into her state-of-the-art mixer which probably costs more than my laptop. Simply owning that mixer would probably transform me into the type of person who cooks quail eggs. As she dumped pumpkin into the mixing bowl, she mentioned that if you are using homemade pumpkin puree, be sure to drain it using a cheesecloth because it retains a lot of water. Otherwise your cake will get really soupy.

That same week my mother came over and showed me how to chop, boil and puree a pumpkin. She even brought her own big, orange squash as a demonstration model in addition to the pumpkin I’d bought myself. How sweet of her, she who was well aware that chopping, boiling and pureeing a pumpkin takes more time and effort than walking to the grocery store on your hands to purchase canned pumpkin. I was the victim of a pumpkin dumping ring! I was left with two pumpkin’s worth of puree in my freezer. When I froze them in my disposable Tupperware containers, they turned into mini, pumpkin glaciers.

Taking Martha’s advice, I defrosted a tub and bought some cheesecloth at Kroger. I didn’t even know Kroger sold cheesecloth, but they do. I don’t know if there are any cheese makers in this area, but the fabric must be popular enough to justify stocking it. After draining the pumpkin, I checked the bowl beneath it to see how much water had accumulated. There were one and a half cups. One and a half cups! No wonder I had a pumpkin popsicle. Once I defrosted and drained the rest of my pumpkin, I freed up significant space in my freezer.

As I was shivering in my short-sleeved hoodie and tank top after the Ani DiFranco concert last week, it occurred to me, “Hey, the seasons are changing, you dumbass. Next time bring a sweatshirt!” My approach to choosing my clothes is to assume that today will be the same temperature as yesterday, which makes no sense because if that were true there would be no seasons. I must think I live on the equator.

The changing seasons mean a lot for my weight loss. I’m going to have to buy a whole new winter wardrobe, again, for the third year in a row. Yeah, this is the part where I send out engraved invitations to my pity party and no one RSVP’s. “Ooooh, that’s so horrible, PastaQueen. You’re so small you have to buy new sweaters. We feel so, so, terrible for you.” I know, it’s a good problem to have, but it’s still a problem. I still mourn the loss of my fuzzy brown extra large sweater. It was so soft and flattering of my coloring! At least I’m small enough that I can find lots of stuff at the thrift store now. Luckily, I don’t think I’ll have to buy a new winter coat. Yay! The old one was a bit tight last year but now it’s a bit loose, so there’s about $100 saved. I could put it towards buying an alpaca. I’d rent a carport for him to live in and I’d start making my own yarn and knit my own sweaters. Or I could just hit the clearance racks.

As it gets colder it will also mean I’ll have to abandon my beloved trail and head inside to run on the treadmill. I anticipate that this will suck hardcore. I wasn’t serious about running last year, but yesterday I ran 5 miles in 55 minutes. This was tolerable because I had changing scenery, but I don’t know how I’m going to cope with looking at a wall for almost an hour. Last year I watched TV shows and got through both seasons of The Venture Brothers and almost all five seasons of Justice League and Justice League: Unlimited. Right now I’m contemplating watching every episode of Daria. The other danger with the treadmill is that I can hop off at any time, whereas on the trail once I’ve run two and a half miles in one direction I pretty much have to run back or take up hitchhiking. I also have a new downstairs neighbor, so I have no idea how the sound of me jogging on his ceiling is going to go over.

The one good thing about fall is that it heralds the return of Jell-O’s pumpkin flavored instant pudding. Mmmm! It’s not sugar-free or fat-free, but oh well, Jell-O, I love you anyway. I’ll indulge in it reasonably with some fat-free whipped cream. It’s so much more exciting when you can only get a food for a limited time. It makes it more special, like Easter Peeps.