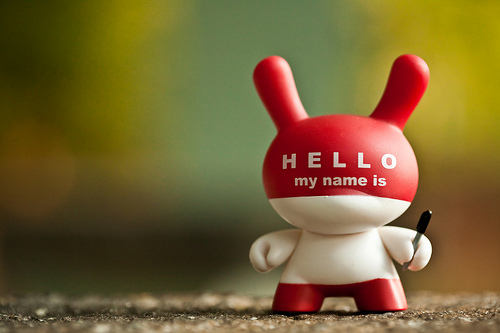 I changed my Twitter name from @pastaqueen to @jennettefulda not long ago, and was sort of surprised this didn’t seem like a big deal. Here I was, using my REAL NAME online, something that ten years ago was recommended as much as driving drunk, huffing paint and popping pimples. (And please, don’t try to do all three at once, especially if you’re using your real name.)

Back in those days (the NINETIES) we were warned that the Internet was full of dirty old men pretending to be 16-year-old girls who wanted to molest you or steal your credit card number. We’re still warned about that today, but people don’t seem to be as worried as much as they used to about using their real names online. When did this happen? Why didn’t I notice this sooner? Sometime in the past decade the Internet has become accepted as an extension of our “real lives” and not just an escape where you can pretend to be somebody else. You get to do both now! You can be your real self or your fake self. You be real when being your fake self, or fake when being your real self, you poser, you.

There are now realms of the Internet where it’s considered relatively safe to use your real identity. Twitter. LinkedIn. Facebook. They’re the good neighborhoods. Yes, there are privacy concerns about these social networking sites. Facebook knows far too much about your bad taste in music, and the Google cache and Archive.org will never forget that stupid thing you said on that forum that one time where you compared someone to the Nazis. But millions of people are using their real names in large numbers in these places, suggesting that they don’t deem those risks that serious. It’s like driving a car. Yes, something bad could happen while you’re doing it, but hopefully it won’t.

Plenty of people still use made up handles and fake names, too. They use them in the bad parts of Internet town, where people don’t use their real names. File sharing web sites. Porn portals. Illicit IRC channels. Or they use aliases when they’re doing bad things, as occasional commenter f*%k@you.com surely knows. Even in the good neighborhoods some people stay anonymous so they feel free to talk about sensitive subjects they might not otherwise feel able to (says the weight-loss blogger who kept her name pseudo-secret for years). I still use dummy information whenever I have to sign up for a news site before reading an article. Take that, New York Times online!

Still, we’re using our real names online more and more. It makes me wonder if the next generation will have different ideas about what should be private and not. How much will seem normal to know about each other ten years from now? I hear that in small towns everyone knows what’s going on in everyone else’s lives. It seems like the bigger the Internet grows, the smaller our cyber town is getting.

“So how was London?” Mr. Grimm asked me.

I blinked for a second as my neurons fired, trying to figure out how the man I had just met knew where I’d recently vacationed. I sat in front of his desk, staring at the computer screen he’d pulled up. Oh, right. It’s in my file. Mr. Grimm was not a purveyor of macabre fairy tales. He was my banker. I’d let them know I was leaving the country so they wouldn’t suspend my account for suspected fraud when I withdrew pounds from a London ATM.

“It was good,” I told him. I had come to the bank to close a savings account because every time I paid bills online the site defaulted to withdraw from my savings account instead of my checking account. A few times I’d forgotten to select the right account in the drop-down box and had even overdrafted once, though they waved the fees when I explained what happened. I have higher yield savings accounts at other banks, so I decided to close the account to solve the problem.

When I walked in to request they close the account, the female teller was all, “What? What? You want to close an account. WHY?! WHY, OH WHY?! Haven’t we been good to you? Haven’t we changed your $20 bills to quarters for the laundry?! Haven’t we given you complimentary coffee and cookies and Diet Pepsi?! Haven’t we greeted you politely every time you enter and wished you a good day when you leave?!” I was then shuffled into the office of a manager and quickly reminded that the tellers are all women, but the managers are mostly men, and something is probably wrong with the system to cause these gender inconsistencies.

Mr. Grimm set about calling four different people until he found someone who could change the default account on my bill pay screen. Then I couldn’t remember my banking password so we had to reset it via the automatic system that calls my cell phone to give me the secret confirmation code. So, I spent about fifteen minutes in Mr. Grimm’s office, sucking on a butterscotch candy from his dish, trying to change one little setting on one little screen, all so they could keep the $150 in my savings account at their bank. Times must really be tough. When I wasn’t thinking about how much time this was taking, I was mildly freaked out by how much information Mr. Grimm knew about me.

“You’ve got a lot of credit card companies in your payees list,” he said. I did. When I got out of college I had a lot of debt but a good credit score, so I played a game of musical chairs with my balance. Every 6-9 months I opened a new account that let me have a 0% APR for the first 6-9 months and transferred the balance. I looked at the rest of my payees and my automatic payments and realized that Mr. Grimm could figure out who my doctors were, where I liked to shop with my store-based rewards credit cards and how much money I made every two weeks through my direct deposit. He could see what company manages my Roth IRA and how much money I make off of my blog. He could see what I have earned in book royalties. All I knew about him was that he mentioned having kids.

“So, how many kids do you have?” I asked as he clicked on screens.

And that’s all I know about Mr. Grimm.

Finally my accounts were fixed and I grabbed a complimentary coffee on the way out, trying not to think about how my naked life had just been on display to a stranger. Next week I’ll be back for some quarters.