If you haven’t listened to it yet, I highly recommend you check out the latest project from Shauna and Carla a.k.a. DietGirl and Miz Fit. These fab ladies have overcome time zone differences and the winter sniffles to bring you a fitness podcast called Two Fit Chicks and a Microphone. They solicited names for the podcast a few weeks ago, and this title is far more clever than the only one I could think of, which was “Not the Jillian Michaels Podcast.” Hey, it’s got great SEO! (Half of you are now mumbling, “What’s an SEO?”) This week’s episode is all about running. New podcasts should be published every two weeks or so, and you can even find them in iTunes! Congrats ladies, and keep up the good work!

If you haven’t already, be sure to enter the $100 gift card giveaway in association with BlogHer and Pepperidge Farm. The contest is open until November 2.

Finally, a big congrats to my friend Stephanie O’Dea, who appeared on Good Morning America today to promote her new book, Make It Fast, Cook It Slow: The Big Book of Everyday Slow Cooking. Steph did great and I know her book will too. I’m gonna’ see if I can use part of my peck of apples in her apple crisp recipe. 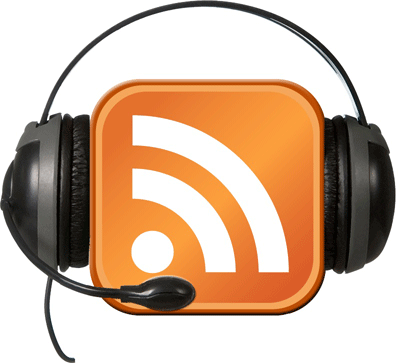 There are only so many times I can listen to my favorite CDs in the car before my mind wanders and I get bored. I’ve taken lots of long car trips lately, and I find that podcasts keep my mind engaged in a way music fails to over long periods of time. It’s fun to have people chatting over your speakers, talking about interesting things. Below are some of my favorite podcasts that have kept me company over the past year.

When I listen to RadioLab I feel like my skull has opened up and my mind is as large as a star-filled sky. Hosts Jad and Robert explore a different theme each show, showing how science and curiosity lead to exciting answers about the universe, but usually end with even more questions. The audio of the show is expertly produced, integrating interviews, sound effects and narration in an innovative and enthralling way (though some might also find it exhausting). I’ve learned a lot listening to their archives for the past few months, some of which has forever changed the way I look at the world. The only bummer is that the full-length shows aren’t published that frequently, though they put out several shorter podcast-only episodes in between the radio broadcasts.

After I saw the ads for the Showtime TV version of this series a few years ago, I decided to listen to some of the “This American Life” radio show that all the TV critics mentioned in their reviews. I got sucked into these modern day stories of ordinary lives, hosted by the sweetly geeky and adorable Ira Glass. Each week they take on a theme, playing several stories on that theme. I’m not too fond of segments where an author just reads a story, but the interviews and narrated pieces are usually riveting. I’m still working my way through the over 10 years of archives.

Once the economy imploded, the above-mentioned “This American Life” did a couple shows explaining the mortgage problem and other esoteric financial events that led to the crisis. The shows were so popular that it led to the two producers of those episodes to put together a team to work on the Planet Money podcast, which dissects the financial world in easy to understand and entertaining ways. The episode about the economics of piracy was particularly entertaining. The shows are about 20-30 minutes long and are published 3 times a week.

Terry Gross, the host of Fresh Air, has a siren-like voice that sucks you in and comforts you. Every weekday she interviews someone, be it an author, politician, celebrity, or sports star. I’ve just started listening to this podcast within the last few weeks, but I was lucky enough to see Ms. Gross speak at Indiana University a few months ago. She played highlights from her long radio career which were alternately sincere and silly.

Every week “Wait, Wait, Don’t tell me” is filmed in front of a live audience as a panel of comedians make fun of this week’s news. There are games, lots of jokes, and the ubiquitous prize of getting Carl Kasell’s voice on your home answering machine. I like the interview segment the best, where they’ve talked to everyone from prosecutor Patrick Fitzgerald, to other people that you’ve actually heard of.

The state of the economy has piqued my interest in financial matters. Marketplace Money is a weekly show that talks about, obviously, money. There are stories, call-in questions from listeners, and good advice about how to handle all things money.

What are some of your favorite podcasts? Let me know in the comments below and I’ll check them out.