I’ve lost weight this week even though I haven’t really been trying to (any more than I ever am). Weight loss used to be my biggest hobby, and now it’s something I do when I get around to it, like the laundry. It’s still on my mind, but sometimes the pounds pile up rather high before I can knock them off again, leading me to a life of weight maintenance instead of weight loss. My loss happened despite eating pizza two out of the last three days too. Go figure.

I’ve been trying to figure out what exactly I did so I can keep on doing it. All I can guess is that I’ve kept my self happily distracted the past week with work, TV, Internet surfing, and socializing. The socializing included pizza and cake though, so I don’t know how that figures in. I’ve felt happier and bouncier ever since the sun returned to Indiana. The secret to weight loss might be happiness. I know people tend to believe weight loss leads to happiness, but I think it’s the other way around. I do best losing weight when I’m feeling good and the other areas of my life are in balance. (And when I’m eating lots of pizza, evidently.)

I would not recommend moving out of your 2nd floor apartment with a western exposure on a clear, sunny afternoon of 90 degrees. My brother and his friend earned every penny we paid them to load a truck full of dressers and SteelCase desks. I loaded and unloaded 5 carloads worth of boxes and assorted stuff, and was surprised by how much you can cram into a 2002 Saturn SL1. And still, I have not yet moved everything out of my apartment. There are wall hangings to take down, kitchen items to box, more clothes to toss into bags. I don’t even have that much stuff, but it is amazing how exhausting it can be to move what little stuff I have. I have a true appreciation for what my mother went through every time we moved to a different state. I can’t imagine having to pack everything at once instead of gradually transporting all my stuff across town like I’m doing now.

My body is sore, and I’m glad I have a week of wiggle room in my Couch to 5K training, because I need to recuperate. Near the end of moving day, I bent over to pick something up and stretched my right calf a wee bit too far. Now it hurts to push off of that leg. Plus, my back begins to protest every time I pick up a heavy box. I’m just plain tuckered out.

The good news is that the cable man came yesterday afternoon and hooked everything up, surprising me with their efficiency of service. Well played, Comcast. Well played. I no longer have to lean against the far bedroom wall to steal wi-fi from my neighbor’s unsecured network. The kitties are adjusting well, and now that they have more space perhaps they won’t try to kill each other every single night, just on high holidays. I also ate pizza for the first time in a long time as dinner on moving day and felt absolutely no guilt because of all the exercise I’d done in the morning and afternoon. Yum, pepperoni and cheese never tasted so good.

During a long running/ellipiticizing session last week I kept thinking of the mini-pizza I’d bought at the whole goods store and how great it would taste as my post-workout reward . Imagine my horror when I ripped open the cardboard box and this monstrosity slipped out. 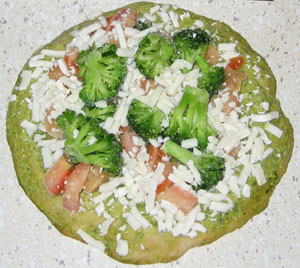 Broccoli? On a pizza? I thought sprinkling pineapple chunks on top was weird, but this takes the cake (er, pie). In all fairness, the picture on the box clearly displays broccoli, but somehow it looks so much tastier when fully cooked and photographed professionally. 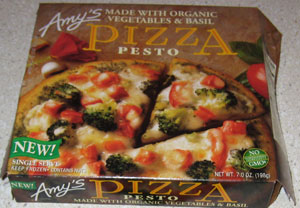 In the picture, the broccoli, tomatoes and cheese all blend into a tasty looking whole. The broccoli florets in the frozen version on my kitchen counter looked like an afterthought someone sprinkled on top after they ran out of pepperoni. They were as welcome as dried cockroaches. Normally I’m fine with broccoli. I don’t pretend to upchuck at its mention, but I’ve never written sonnets about it either. It just doesn’t belong on pizza, okay? Somehow they fooled me by calling it a “pesto” pizza. I don’t really know what a pesto is, but it sounds tastier than “broccoli and tomato.”

I ate it anyway. But next time I’m double-checking the box before I buy.

I want some Mr. Gatti’s pizza. Which is odd because I haven’t even thought about Mr. Gatti’s pizza for 10 years and their regular pizza is fairly mediocre. The best reason to go to Mr. Gatti’s was their dessert pizzas – Dutch Apple Treat, Very Cherry Dessert, and Chocolate Crème – mmmm. I can’t recall ever having the Coconut Crème pizza, but after looking at the photo on their website I’d like to rectify that oversight. I could go for some cinnamon sticks too. 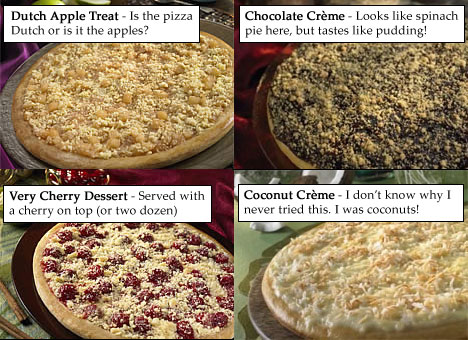 Mr. Gatti’s is a southeastern chain of pizza restaurants, so those of you who don’t have a drawl probably haven’t eaten there or even heard of the place. I lived in Louisville, Kentucky during my middle school and high school years. During field trips our school bus would pull up into their parking lot and dump a hundred hungry teenagers into their dining room with the large projection TV screen. We’d line up at the front register and pay our $6.00 for the buffet and then walk past the sneeze guard grabbing slices of whatever we wanted. This was easier than stopping at McDonalds because we could just grab food and go sit down instead of waiting at a register for personalized orders to be served on plastic trays.

When I think of Mr. Gatti’s, I don’t think so much about their pizza or all the times I went back for way too many helpings of cinnamon sticks. I think about that time in my life. I remember celebrating an academic tournament win in their dark dining room. I remember escaping molded plastic chairs in classrooms if only for a day. I remember being a kid. It reminds me of Louisville. It doesn’t matter that the pepperoni pizza was forgettable. I have other memories tossed into their pizza dough. I want to go back there so I can eat the memories.

As an insightful little copy editor says on their website, “When pizza is made right, it is joy in the round. It is a social experience just waiting to happen.” I never went to Mr. Gatti’s except on special occasions, which is why it has a special little spot in my head. It’s odd that the thought of a simple little restaurant chain can do all that.

I slowed to a stop at a red light on the way to work last week when I saw a woman start to jog across the crosswalk in front of me. I noticed her legs first, poking out like bamboo shoots from her jogging shorts. The word “anorexic” instantly popped into my head, but I held off judgment for a second because I know marathon runners can become very skinny without necessarily starving themselves. Then I scanned my eyes upward and caught a look of the woman’s shoulder blades poking out from her tank top and decided my initial leap to a conclusion landed me in exactly the right spot. As I further assessed her body, I was amazed she was able to move at all since there appeared to be very little muscle on her body.

I’ve never done charity work in Ethiopia and I didn’t liberate concentration camp survivors during World War II, so it occurred to me I had never actually seen an emaciated body on display this close up before. I couldn’t stop gawking even though I knew it was rude. I’ve seen pictures online of starving refugees and shaken my head at the latest photos of Kiera Knightly and Kate Bosworth and Callista Flockhart, jokingly thinking “They should really eat a pizza!” It somehow seemed less funny seeing a woman in the bone who was clearly emaciated. She was jogging across the street from a pizza joint, but I knew she needed more help than to take a sudden left turn and order an extra-large with the works. The saddest thing was I bet she still thought she looked fat.

But what could I do? The best thing I could do was keep my foot firmly planted on the brake. I’m sure if I were to even tap her with my front bumper I could shatter her weakened bones and even kill her malnourished body.