Hey, Mom! I am wishing you a happy Mother’s Day on my blog so I can post a picture of this: 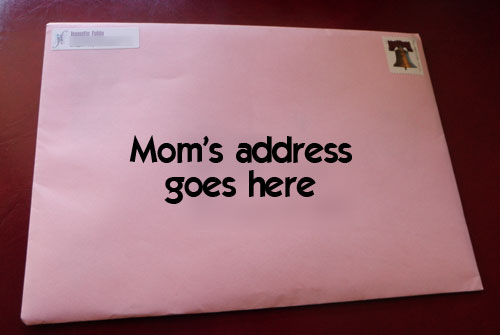 This is your Mother’s Day card! You can tell because it’s in a pretty pink envelope. Which is still in my possession. It would be sitting in your mailbox in Indianapolis if I had paid attention to any of the junk mail advertisements I received in the past few weeks that explicitly stated that Mother’s Day was this weekend. However, I have a highly attuned ability to filter out most advertising, so I thought Mother’s Day was NEXT weekend. But really, isn’t Mother’s Day EVERY day? Of course it is. Which is why you will not be upset when I pop this in the mailbox this evening and you get it on Tuesday. (Be swift, United States postal service. Be swift!)

We even buy the same shoes: 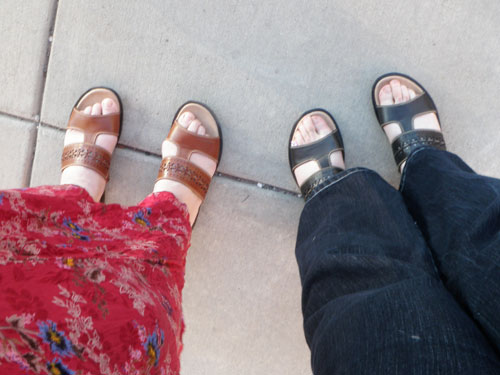 More frightening than the fact that my mother and I bought the same type of sandals at Kohls (on sale!!) is that I figured this out by the sound they made on the pavement. Yes, BY SOUND. Most people have to go blind to develop super-hearing, but not I.

We were walking to a restaurant last night when I heard that SQUISH sound my left sandal has been making, except it wasn’t in time to my own footsteps. I started to alter my pace to make sure it really wasn’t me squishing and squashing down the street, and that’s when I thought to take a look at my mom’s feet.

So, yeah, I am becoming my mother. But at least we chose different colors, and I certainly did not get the black pair just because they didn’t have a size 9.5 in orange. Certainly, totally, definitely not.

I am still getting back into the swing of things post-holidays. I don’t remember much from the time after I passed out into a sugar-induced coma. However, as the pictures below show, I was present for the lighting on my mother’s 60th birthday cake on Sunday. 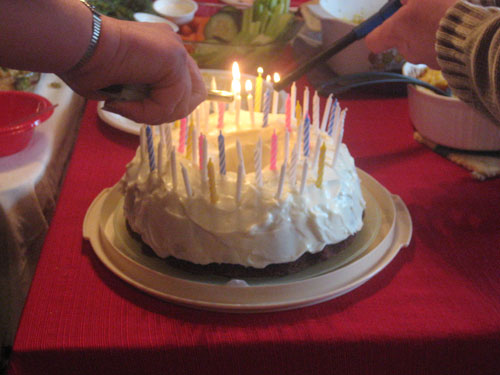 Here we are lighting the cake. 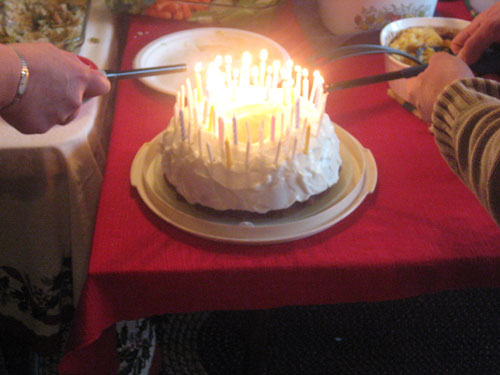 And here we are still lighting the cake. 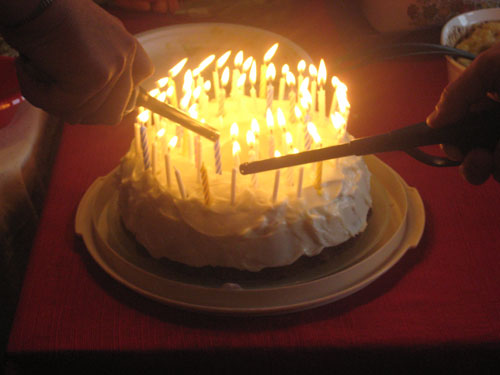 And here we are again, still lighting the cake, watching the frosting start to melt. 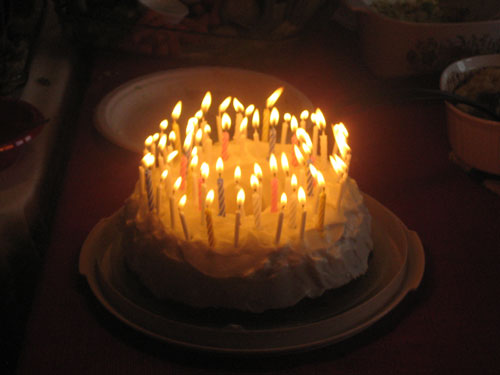 And finally, the cake is lit! My mother blew out the candles in one breath, proving that old age has not affected her lung capacity. Happy birthday, Mom! Here’s to 60 more years!

As promised, here are photos of me all gussied up for my brother’s wedding two weekends ago. I was waiting for the professional pictures to come back, but they haven’t turned up yet so I’ll just show you my shaky, handheld photography in questionable lighting. The one on the left was taken outside in front of a stretch SUV limousine and the one on the right was taken in my hotel room, which is why I look kind of blue like Smurf in one and kind of yellow like I have Hepatitis in the other. I wanted to show you the back of the dress because I love the way the fabric wraps around and drapes down. I was able to grab those strands at the reception and wave them around like butterfly wings. 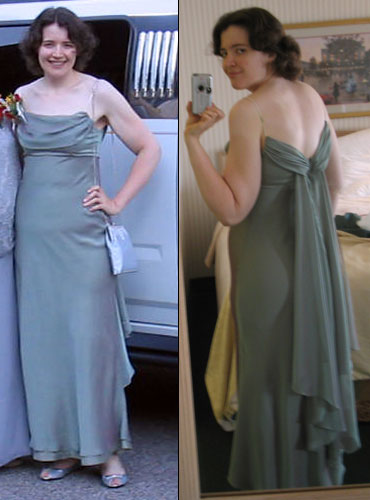 My dress was green but did this cool shimmering thing in the light that gave it a red sheen, which doesn’t show up in the photos at all, so you’ll just have to take my word for it. You can’t tell from these pictures, but in the hotel photo my straps are beaded and in the limo photo they are not. Why is this?

BECAUSE I HAD A FASHION EMERGENCY!!

I had successfully put on my dress and walked out to the car in my open-toed shoes that delightfully showed off my pink toenail polish. However, when I opened the passenger’s side door and leaned over to put my purse on the floor I heard a SNAP! Then my right strap went slack. Then I said some naughty words. In my fatter days I sometimes had concerns about splitting tight pairs of pants, but I’d thought my days of possible wardrobe malfunctions were over. Alas no, the wire holding the beaded strap to the front of the dress broke. It was just like that time Kelly Monoco’s top almost came off during Dancing with the Stars, only I didn’t have a live studio audience and I wasn’t doing the samba.

Miraculously the beads stayed on the wire and I was able to hold the strap as we drove to the church. Thankfully, we had expert help on site. My mother is a professional seamstress who carries a sewing kit in her purse. She carefully analyzed the situation in the lobby of the chapel. First we tried sewing the strap back onto the dress, but there wasn’t enough wire left to do so. We considered just tucking the straps under my dress at my armpits and going strapless, but I was concerned I might end up flashing the congregation during my reading from Solomon. Next we were thinking of attaching the strap with Scotch tape and safety pins and camouflaging the whole mess with my corsage, but as we looked at my corsage we realized the florist had provided us with a solution. There was a small white ribbon tied neatly around the stems. 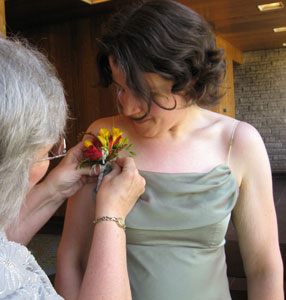 Yes, my mother sewed new straps onto my dress in the lobby of the church half an hour before my brother’s wedding using only ribbon from a corsage and a sewing kit. She didn’t even charge me an alteration fee. If we had a video camera, I’m sure we could use footage of this incident to get her an audition on Project Runway.

After that, I made sure to sit up very straight and not bend over. I made it through the ceremony without flashing anyone, though I broke the left strap while bouncing around to “Shout” at the reception. Luckily, my left beaded strap was still in tact, so I just slipped on the spare from underneath my armpit and all was well for the rest of the night. And if my spare straps had broken, I’m sure we could have fashioned a whole new dress out of the tablecloths and napkins.

The most remarkable thing other than my impromptu alterations is that no one said a word about my underarm flab. In fact, I got lots of compliments about how good I looked. So girls, don’t fear the sleeveless dress! I’ve got baggier underarms than 99% of the population and it was no big deal. You don’t have to live in fear of the strapless dress, just the fear that your dress will become strapless.