When I walked into the room, I immediately categorized everyone who was sitting and waiting for the lecture to start into two groups – bright young medical students and old people in pain. I could have been wrong since I myself was a young person in pain, but regardless, as I looked into the audience I thought, “My people! I’ve found my people! Let’s turn off the lights and moan together!”

I attended a free seminar last Wednesday at the IUPUI student center called “Myths and Facts of Pain: Is it all in your head?” that is part of the IU Mini Medical School 2009. I heard about the series on a local radio show, Sound Medicine, after they did a segment about chronic pain. The lecture was free, and I work downtown anyway, so I decided to stop by. Plus, they had free snacks! The caterers were even considerate and included a veggie tray along with the brownies and cookies, a true rarity in modern society.

The first speaker was Dr. Palmer MacKie, Assistant Professor of Clinical Medicine in the IU Department of Internal Medicine with clinical interests in treating those with persistent pain. I learned several new things about chronic pain from his talk and his multiple PowerPoint slides, and even more of it went flying over my head splatting into the wall behind me.

First, as I’m sure it’s made absolutely crystal clear by this diagram, chronic pain and acute pain function differently in the central nervous system. 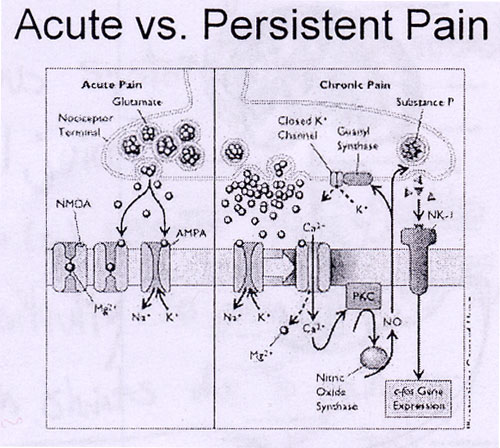 The left half of the diagram shows how the body is supposed to react to pain, and the right side of the diagram shows how screwed up your body’s response becomes during chronic pain. Even more depressing is the fact that the brain changes after you’ve been in pain a long time, a phenomena called neuroplasticity. “Plasticity” refers to the ability to change and “Neuro” refers to your brain. Your body learns how to be in pain. The common English translation of this is, “Jennette, you are totally fucked.”

Other interesting things I learned:

There was another speaker after Dr. MacKai, but he was an OBGYN who was talking about pelvic pain. Thankfully I do not have pelvic pain, at least not yet, so I decided to grab a cookie and drove home in a windstorm that knocked out several traffic lights instead. After all, I had a headache, and there was only so long I could concentrate before I had to lie under the table.

During the lecture, Dr. MacKai asked the question, “How many people have been in pain for over…” and I started to raise my hand, “…10 years.” Then I put down my hand, turned around and saw several people with their limbs raised. At that moment I wanted to get up and give them all a hug and tell them, “I am so, so, so incredibly sorry.” Because I am so sorry for those people. Now when I see a man walking slowly with a cane in front of me, I don’t think, “I wish he’d walk faster,” I think, “He must be in a lot of pain.” At least I know there are a lot of us.

* BTW, I am not a doctor. I related this information as I best understood and remembered it, but it’s possible I made some errors because I do not fully understand the processes I wrote about.