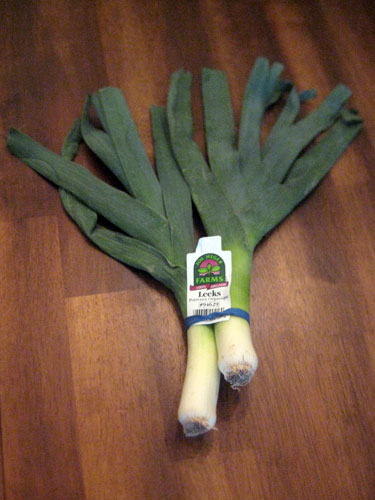 Several years ago I was watching a TV show on healthy eating in which the host was playing a game with school children. He’d hold up a vegetable and ask the kids to name it. The results were rather sad. The kids couldn’t name some basic veggies. I was feeling rather superior, calling out “Asparagus!” and “Radishes!” with glee until the host picked up an odd, green leafy thing and I was stumped.

“It’s a leek!” he told the kids. I still didn’t understand what he meant. A leek? What the hell was a leek? I Googled it and discovered there was indeed a vegetable called a leek and according to this site it was related to the onion in some way. And now, Farm Fresh Delivery has dumped one on my doorstep. So I ask you, dear readers, what shall I do with my leeks?