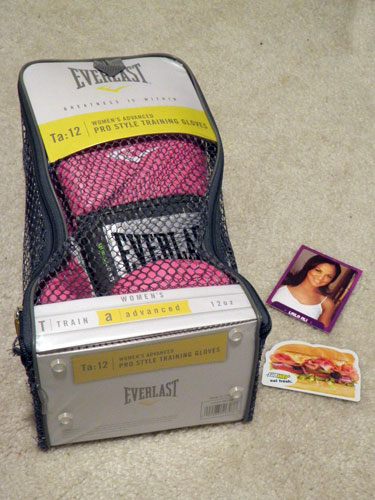 Jared, the Subway guy, finished the New York Marathon last weekend in five hours, 13 minutes, 28 seconds. I’m trying to remember the last time I spent over five hours doing anything constantly, and the only things I can come up with is sleeping. And most nights little kitty paws or meows wake me up pleading for food before I can get that much continuous sleep. So, big props to Jared!

It’s also time for the second-to-last Commit to Fit giveaway Subway has been running in association with Jared’s goal to run the marathon. This one is about famous athlete inspirations, and I was given the choice of a prize pack associated with one of these athletes:

I’ve got to be honest and admit that I only recognized Michael Phelps and Laila Ali. I was 50% sure Nastia Liukin was a gymnast, so that puts my recognition rate at exactly 50%, which is an F. I’m sure they’re all fine athletes, especially since they’re part of a Subway giveaway and my ass is not. I also have to admit, picking an athlete was sort of exhilarating since I didn’t know what prize would come with each one. (Well, I could make a decent guess, but I don’t think I’d look that great in Michael Phelps’ Speedo.) I felt like I was on Let’s Make a Deal and I was trying to chose between door number one or door number two. I decided on Laila Ali because 1) She was on Dancing with the Stars and 2) She hosted American Gladiators. Yes, I consider both of those things to be pluses.

The prize that came with choosing Laila as my athlete inspiration was a pair of pink Everlast boxing gloves, a $5 Subway card, a Laila Ali sticker/trading card, and a paper lunch bag with her picture on it (which I just now realized I forgot to photograph, but I’m too lazy to re-photograph the whole set, which is probably another reason why I’m not an athlete inspiration). The closest I’ve ever gotten to boxing is when I took a TurboKick aerobics class. Before I got this prize, Ild never put on a pair of boxing gloves. Unexpectedly, it was sort of fun to lace up velcro up and start punching doors and walls. (Don’t tell the landlord.) However, I think any joy I experienced punching inanimate objects would have quickly dissipated if someone actually hit me. (Not the face! Not the face!) I was going to take a photo of me wearing the gloves with my hands up in a guard position, but I do not have the dexterity to program the camera to take my picture while I’m wearing boxing gloves, so you’ll just have to leave that one to your imagination.

If you’d like to enter for a chance to with this prize package, leave a comment on this entry telling me who your athlete inspiration is. It doesn’t have to be anybody on that list. You must be a US resident to enter. The contest ends at 11:59pm on Monday, November 15, 2010. Winner will be drawn randomly. For more information about the Commit to Fit program and for a chance to win up to $26,200, visit the Subway Facebook page. You’d better hurry on that one, though, because their contest ends on the 14th!

In other news, Diane from New Hampshire was the winner of the last giveaway for a $25 Subway gift card. Congrats, Diane!

Disclosure: All prizes listed in this post were provided for free.

My most favorite show featuring sequins and feather boas and bad puns is back on the air. Yes, Dancing with the Stars is broadcasting live every Monday and Tuesday night. I think my fanaticism for the program is waning a bit, like the third year of a marriage where we’re starting to get used to each other. I’ve missed a couple of episodes already because the two hour length leaves my attention waning. I keep thinking “I should really be exercising or writing instead. Or better yet, dancing!” Then I leap up off the couch and do an imitation of the mambo that causes my cat to scamper out of the room in fear. He evidently fears flailing arms and booty shaking more than plastic bags.

One of the things I love about Dancing with the Stars is the athlete competitors. They always have an awesome attitude. Jerry Rice, Emmitt Smith, and now Laila Ali have all come in with a positive outlook and ready to work despite the fact that they had as much hip action as a GI Joe figure. They’re in it to win. This awesome approach they take to conquering an obstacle is probably why they are so successful in their chosen professions. It’s also the same attitude you have to take to succeed at weight loss.

Heather Mills is on the show this year too and she has an equally cool attitude since she’s dancing with a fake leg. I don’t know much about her other than she’s divorcing Paul McCartney, but I hope if a motorcycle ever chopped off my leg I’d be as willing to challenge myself like she is. Many people consider this show to be cheesy and melodramatic – and it totally is – but they also sneak in lessons on how to live your life between the carefully edited biography packages and the judge’s criticisms about heel leads.

My favorite contestant this year is Laila Ali, a boxer and daughter of Muhammad Ali. The girl is all muscle and it is totally sexy. Check it out. She could flick her fingers in my general direction and the gale force of wind would knock me on my well-padded ass. But she looks glamorous in the satin ballroom garb and has a graceful elegance on the dance floor. She oozes confidence. It’s great to see a woman with size and stature who is in no way fat. It’s such a contrast to the ideal of feminine beauty that is typically represented on TV and magazines. Too bad she’s partnered with Max, who seems so slimy I bet she has to wash her hands after every hold. I hope she wins, though it seems like it’s harder for women to take the competition than men since more flashy moves are expected of them.

Strangely, models don’t seem to fair well on the show. The first woman kicked off was the funny and clever Paulina, a model who was in a music video for The Cars in the 80’s. I was bummed since she seemed like someone I would hang out with. She and Alec had a fun chemistry that I was looking forward to watching develop. But she wasn’t popular enough and didn’t dance well enough to stay. This week it was Shandi somebody, a beauty queen who lived up to all my expectations for beauty queens. I’m not crying in my oatmeal about that one.