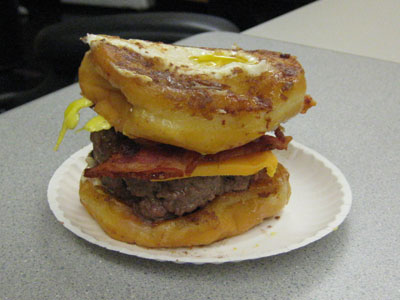 Yesterday at work we made hamburgers with Krispy Kreme donuts as the buns. I don’t know why. These things just happen. One minute you’re talking about chocolate-covered bacon and the next you’re daring your boss to cut off two years of his life in two Krispy, greasy bites. 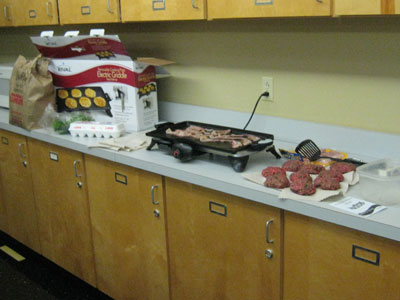 A lot of supplies are required to make donut burgers: a griddle, glazed donuts, ground beef, bacon, cheese, eggs and of course lettuce and tomatoes. Don’t forget your veggies! If you ever make these at your own workplace, a fried egg works well to cover up the donut hole. Don’t forget to toast your donut on the griddle for extra crispiness! But have thick plates and lots of paper towels because these are prone to drip.

I myself did not have a donut burger because the day before that we had frosted carrots for my birthday. 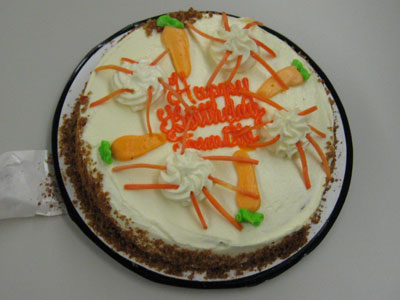 See? There are twenty-eight carrot flakes on top of a carrot cake, and they even spelled my name right. My coworkers are awesome. I’m going to miss them when they all have coronaries.

I decided to skip Saturday morning’s training run because there was snow on the ground and I’ve already fallen once this year, but down in North Carolina they gave runners a great incentive to finish a race course: Krispy Kreme donuts. (Raising money for charity is all good too, but less tangible and not as tasty in your mouth.) According to this article runners ran from a bell tower at North Carolina State to a Krispy Kreme store two miles away and back in near-freezing temperatures. (Oh, only near freezing? I am now less impressed. Try 6 degrees, baby!) And, by the way, they had to stop and eat a dozen donuts at the Krispy Kreme store, preferably without vomiting on the way back. I’m sure course volunteers have no problems cleaning up paper cups for water, but no one wants to mop up partially digested donuts from the sidewalk. In anticipation of this, they actually placed trash bins at the end of the course.

Even in the days when I did not care what I put into my body, I never ate an entire box of Krispy Kremes. I think four would be my limit, maybe five if they were hot and gooey. And I certainly didn’t run afterwards. The race had a one-hour time limit too, so there was no meandering. Philip Curley, the winner with a time of 31:20, said his eating technique was to eat “them two at a time. I smashed them together, rolled them up, and shaped them as a hot dog. Then I would dip it in water and it would get really soft.” Personally, if I’m going to cram 2400 calories into my body (equivalent to 0.7 pounds of fat), I’d like to take the time to enjoy them. I would not, as 3rd place finisher Auburn Staples said, want to reach “a point where I puked a little bit, but I was able to swallow it back down.”

More than 3,000 people participated. That means someone had to cook 36,000 donuts the night before. While I am excited to be taking part in races these days, I think I’d skip the Krispy Kreme Challenge if it ever came to town.

TiVo Reminder: Hey, y’all, the lovely Mo from Big Fat Deal will be on The Morning Show with Mike and Juliet this morning talking about fat and health. I would set my TiVo if I owned one. Sadly, I only have a VCR that eats tapes and then vomits them back up like Krispy Kreme donuts. Hopefully someone will record the event and post it on YouTube for all of us to see. Good luck, Mo!

I saw something that I never thought I’d see here in Indianapolis: 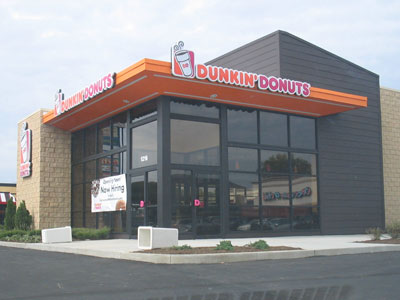 A Dunkin’ Donuts! In Indy! Don’t they know this is Krispy Kreme country? Actually, the south is the die-hard Krispy Kreme territory and Indiana is more like a border state. I sense a turf war coming on. I hope I don’t get caught in the crossfire when donut shop employees start shooting donut holes at one another. Dunkin’ Donuts is mostly a northeastern and mid-Atlantic food chain. When I visited Boston last year there seemed to be one on every corner. It reminded me of the movie Demolition Man where in the future all restaurants are Taco Bell. In Boston all restaurants are Dunkin’ Donuts. According to Inside Indiana Business, Dunkin’ Donuts plans to open 80 new stores in the Indianapolis area in the next 6 years. The first two opened in September and they even donated money to the Special Olympics at the opening to make people like them.

There are only a couple Krispy Kremes in Indianapolis and none of them are near me. However, the local Kroger sells boxes of them, usually located near the front of the store in an evil marketing campaign to get people to break their diets (which worked rather well back in 2004 when I fell off the wagon.) I don’t think I’ve eaten any Dunkin’ Donuts recently, nor do I have any plans to, so I don’t know whose product is actually superior. I do have several childhood memories associated with Krispy Kreme though. We’d eat them before quick recall tournaments. It was fun driving by a store and seeing the light turned on to indicate donuts were fresh and hot out of the oven. Krispy Kreme glazed donuts are best eaten hot. Once when I was waiting in a long drive-through line with a friend they actually gave us free donuts to apologize for the wait. So, even though I don’t really eat donuts much anymore, my loyalty is with Krispy Kreme.

The interesting thing is that according to an article originally published by The Boston Globe, Dunkin Donuts is a “coffee company disguised as a doughnut company. Fifty percent of their sales come from coffee, whereas Krispy Kreme does 90% of its sales in donuts. I guess you do need something to dunk your donut in if your store is called Dunkin Donuts. Starbucks is one of their main competitors, which is funny since a Starbucks just opened on my way to work. It’s screwed up my traffic pattern since people now pull out of the parking lot directly at the point in the right lane where I usually merge into it. There was already one Starbucks on the way to work, but somebody got shot in their parking lot the other month. Be careful, you want the drive-through not a drive-by. Thankfully, I don’t like coffee, otherwise I might think the makers of full-fat lattes were stalking me. It’s harder to avoid tasty foods when they start plopping them down right there on your daily travel routes.

There is also a White Castle on the way home from work, which they tore down and rebuilt recently. There is a time in my life when the two-month disappearance of small, square burgers would have been devastating to me. If I had never lost weight, I’m sure I would have been stopping at that conveniently placed fast-food restaurant all the time. Thankfully, I learned how to cook and I’m not dependent on my ability to roll down a window to get a meal, so I was completely unaffected by its demolition and reappearance. I think the appearance of these 80 Dunkin’ Donuts will similarly have little affect on me. It’ll be just one more place to drive by without driving through. And hopefully no one will get shot there, with bullets or donut holes.

I had to giggle when I saw that Krispy Kreme has introduced a whole wheat doughnut. I’m typically a fan of whole-wheat products, but looking at the nutritional information (PDF here) on Krispy Kreme’s site this donut doesn’t seem to be much of an improvement over the original glazed donut. It has only 20 calories less per serving, only 3g less carbohydrates and only a gram or two more fiber. A slight improvement, but not a remarkable breakthrough in food science.

I’d be willing to try one if I ever found myself in a Krispy Kreme again, which is about as likely as finding me in the next Sports Illustrated swimsuit edition. But I’m of the opinion that if you’re going to have a treat you should go whole hog and get the treat you want. If you compromise, you don’t enjoy it as much as if you’d gotten what you really wanted and you’ve still got more calories and carbs swimming in your stomach than you would have otherwise.

When I drove home from my friend’s theatre performance this weekend, I stopped at Steak N’ Shake and got a mint chocolate milkshake because I had been thinking about it for at least 20 minutes while driving. I told myself “Geez, if you’re going to obsess over a silly milkshake you should just go get one already.” It was damn good and I’m still wiping the drool off of my car’s upholstery. I enjoyed it, probably more than I used to because it’s a rare treat these days and thus more precious. I enjoyed it a bit less when I came home and looked online to discover it had 717 calories. But I don’t regret it because I really wanted that milkshake and that was also the day I discovered I could run 5K continuously, which almost burned off all those calories.

I certainly think it’s good for restaurants to include healthy items on their menu if at all possible. But when it comes to a donut company, adding a healthy donut is like dressing up a cow up in a tomato suit and trying to sell it to vegetarians. It’s not beef, it’s a vegetable! Ignore the taste of cotton/polyester blend! If you go to Krispy Kreme you want to eat something you know isn’t good for you. If you were being health conscious you would be eating at one of the restaurants that has a halo of a healthy brand, like Subway. So, nice try Krispy Kreme, but if I’m lured into your drive-through again I think I’ll stick to a chocolate iced custard filled donut. Yum.