I got the cat carriers out of the closet this week as a preemptive strategic maneuver against the felines in the household. If the cat carriers are already out, the cats won’t freak out and dash under the bed when I grab their furry behinds to stuff them into the plastic prisons. Bwa, ha, ha! I have opposable thumbs and a cerebrum, which gives me the ability to plan. You are no match for me, kitties!

Then, yesterday afternoon, what did I find but this: 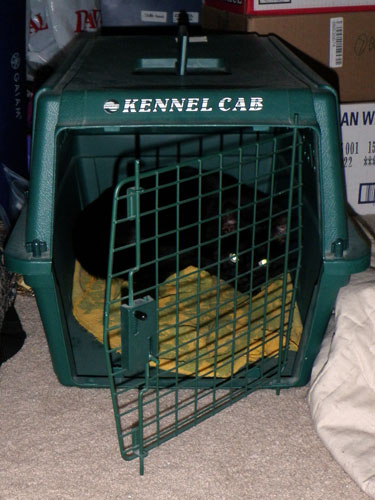 I bet he wouldn’t be napping in there if he knew what was in store for him this week. At least I know he likes his temporary prison!

Below is my most favorite-est mug in the whole, wide world in a photo I snapped earlier this month while testing my new shock-proof, water-proof, gravity-proof, Jennette-proof camera. (Thanks, Dad!) I love this mug so much for reasons I don’t quite understand. Perhaps it is the translucent coating that makes it seem blue and purple at the same time. Perhaps it is the smartly curved lip and the easy to hold handle. Perhaps it is the weight and the size and some undefinable quality of love injected into it by its creator. But let it be known, I do love this mug. 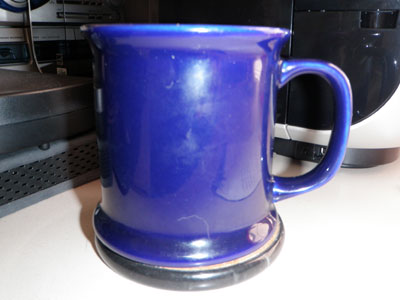 And here is my mug as of this morning: 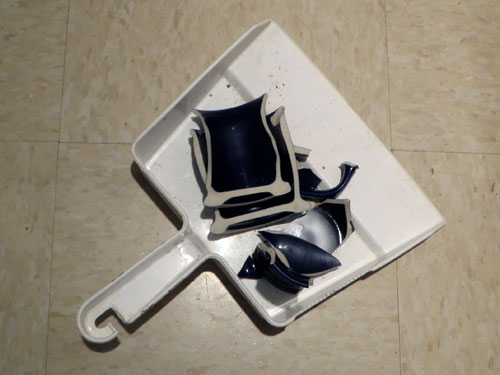 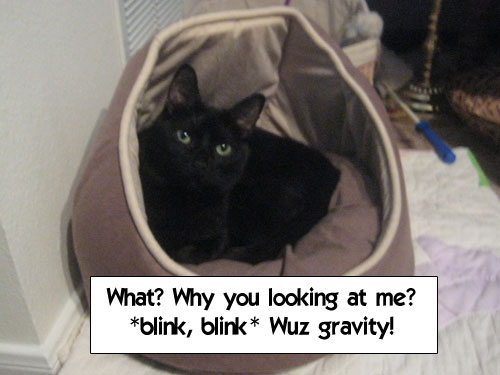 If my little Java Bean were not a total cuddle monkey, I would have to get rid of him. Sometimes I suspect he is a sociopath who quietly manipulates me with snuggles and nose lickings only so he can systematically break every piece of china and glassware I own without fear of reproof. My Beanie Baby is a total mischief-maker, but he also cuddles my face and sleeps on my pillow at night, so he gets away with it. I guess I love my kitty more than I love my mug, but damn, I really did love that mug. 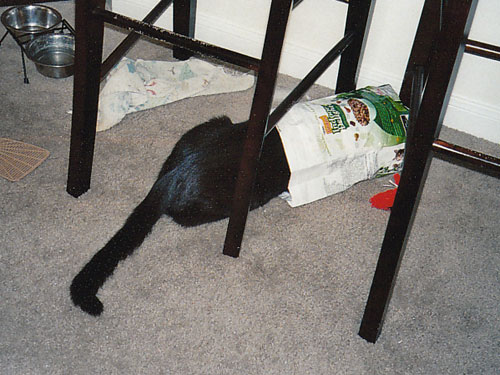 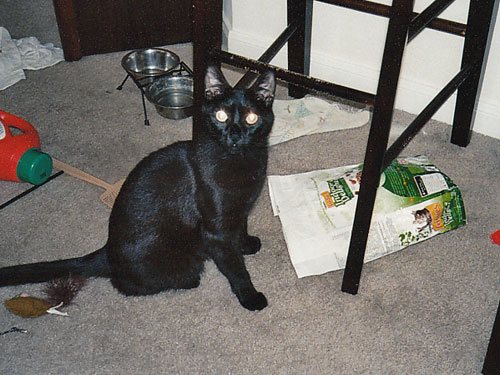 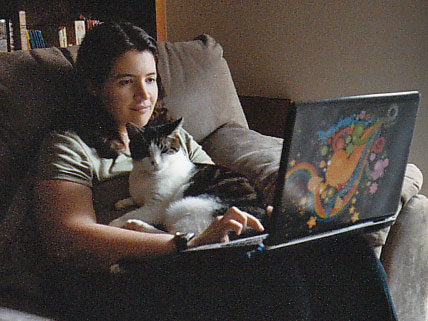 I was wondering – and this is REALLY important – how are the cats getting along???? – Rhonda

Well, Rhonda, the cats’ relationship is best explained through this photo story I assembled last night before I realized how long it would take to assemble a photo story.

The relationship between Officer Krupke and Java Bean is similar to the one I would have with Rachael Ray during a long car ride. I’d have to be sure to drive very slowly so the cops wouldn’t pull me over and find her body in my trunk. I can’t find any real “faults” with Rachael Ray, but the thought of being locked up with someone that hyper in a small space for a long time makes me vomit-y.

Similarly, Officer Krupke and Java Bean are locked in a one bedroom apartment all day with their irreconcilable differences. Java Bean wants to play every second of every day and Office Krupke wants to nap every second of every day, except for those seconds when he wants to eat. Java Bean is too dense to realize Krupke doesn’t want to play, so he pounces on his prey and chases him until ultimately Krupke is hissing from the high ground of the microwave.

Thankfully, Java Bean is easily distracted by moving objects, so a feather wand or laser pointer can quickly diffuse the situation. But the fundamental personality differences remain. So my dreams of seeing my kitties cuddle up licking each other will never be. However, I love them both too much to give them up, so we just cope as best we can, and I keep their nails trimmed to limit emergency vet visits.

So, uh, remember that thing I wrote yesterday? About giving my mom my cat? Well, forget that. She came over last night to scuttle him away and suddenly I was like, “YOU CANNAE TAKE MY KITTEH!!” *Hiss, snarl, spit.* What sounded good in theory did not sound nearly as good in reality. It helped that Krupke was on his best behavior, cuddling with me on the couch, and only hissing at Java twice. No neck biting or blood! That’s progress, right? The little booger doesn’t know how close his ass was to leaving.

So, I’m going to read Cat Vs. Cat: Keeping Peace When You Have More Than One Cat and see if I can promote peaceful coexistence, if not a total lovefest. When I adopted Java Bean I had dreams of coming home to find two kitties curled up together in my office chair. And it will remain just that, a dream. However, maybe I can still negotiate a cease fire. We’ll see. And if things spiral downward again, my mom’s house is still available to house refugee kittens.