When I was in North Carolina, I got to stand next to liquid nitrogen. 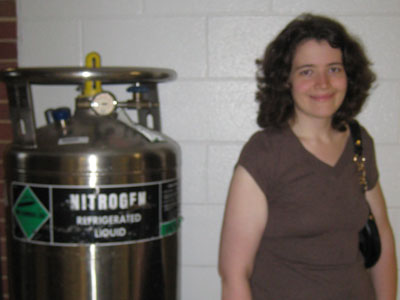 Liquid nitrogen makes me think of Terminator 2. It was good to know that if the T1000 wandered by, I would be able to disable him long enough to scream and run away like a little girl. The liquid nitrogen is stored in my sister-in-law’s lab for reasons I don’t know, but probably has to do with fancy research techniques I know nothing about. Same thing goes for all these vials and bottles on the shelf. 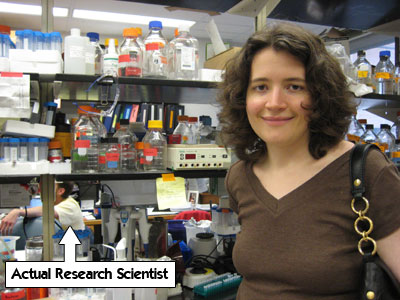 We stopped by the lab because my sister-in-law needed to split some cells so she would have material to do her experiments. She studies inflammation pathways in cancer cells. That’s right, she’s helping to cure cancer, which pretty much makes everyone else’s job look insignificant in comparison. Here she is, kicking cancer’s ass, which involves stylish purple gloves and something that looks like a turkey baster. 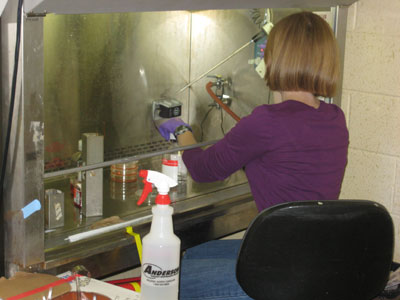 After she was done taking petri dishes in and out of an incubator, we walked past this chart of a cancer cell in the hallway. 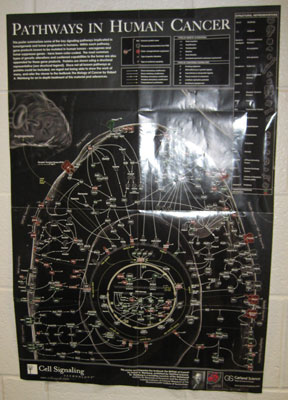 After my visit to the research lab, I had a better understanding of why we don’t have a cure for cancer yet. It turns out there are actually hundreds of different ways a cell can go wrong and become cancer. Hypothetically, if we had a drug for each type of cancer, cancer would be cured. Unfortunately we only have drugs for about 10 types of cancer. So, researchers are studying all these different bubbles and lines of the chart, and then discovering even more bubbles and lines while they’re at it, which will in turn have to be studied.

“That sounds like a lot of work,” I said.

“Yep,” she replied. Plus, she doesn’t spend all her time working on projects because she also has to work on writing grants to get funding to continue working on the projects. Still, it was cool to visit the place where research like this is actually happening.

Not only that, but she makes a tasty Chicken Parmesan too. Mmmm.

BTW, October is National Breast Cancer Awareness month, so go buy some pink pretzels or something. (But also carefully research how much money from a product you purchase actually goes to breast cancer research, because if I don’t say it someone in the comments will.) Or just give the people your money directly. Or give it to my sister-in-law for her grant!