“Do you have the crockpot full of meatballs?” my mother asked me after I got out of my car. We’d just driven two vehicles to my uncle’s house for a holiday gathering. However, all the food was in my mother’s car, not mine.

“Uh, no,” I told her after a short pause. I couldn’t believe my mother was asking me this question. My mother, who compulsively checked the stove before leaving the house. My mother, who carefully staged all the food on the dining room table the night before departure so she wouldn’t forget anything. My mother, who made me top off my car’s coolant in the dark and cold on Christmas Eve so she wouldn’t worry about my car overheating on the drive down. How could my mother ever possibly misplace a crockpot full of meatballs?

“I carried them out and put them on the sidewalk by your trunk,” Sister-in-law chimed in. Two seconds later we all simultaneously made the same realization: We had left a crockpot full of meatballs on the sidewalk in front of my mother’s apartment.

“Do you think they’ll still be there when we get back?” I asked Brother and Sister-in-law on the drive back home four hours later. Sister-in-law was confidant that yes, the crockpot of meatballs would still be there, because neighbors wouldn’t steal other neighbors’ meatballs. She said that if she saw a crockpot full of meatballs on the sidewalk of her neighborhood, she would assume someone had left them there and would be back for them eventually.

I was uncertain whether the crockpot or the meatballs would still be there. I had seen many dog walkers in my mother’s apartment complex and was concerned that some of the mutts may have smelled the meatballs and knocked the glass lid off the slow cooker to have a holiday snack. I also knew that whenever someone left a couch or dresser and bookshelf near the dumpster in my own apartment complex, it was quickly scavenged by someone else. The crockpot was at least 30 years old, and definitely looked like something someone might throw away. We hadn’t left it by the dumpster though, which meant context was going in its favor.

Brother sided with Sister-in-Law, claiming that an empty crockpot might be scavenged quickly, but the presence of meatballs inside the crockpot would lead any snatch-and-grabbers to conclude that this crockpot had not been discarded on purpose.

As we turned the corner onto my mother’s street, there was great anticipation. Would the meatballs still be there? Would the crockpot?

END_OF_DOCUMENT_TOKEN_TO_BE_REPLACED

I was walking down the toilet paper aisle at Kroger yesterday, when I was blindsided by this: 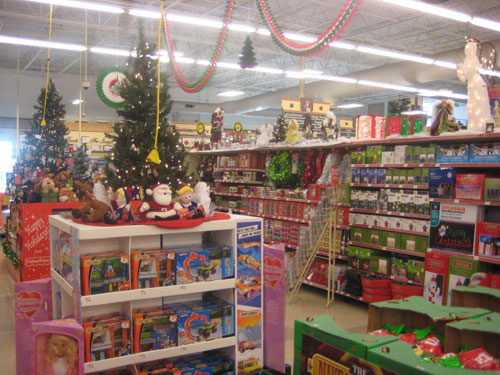 Either my local Kroger exists in a time bubble that has been forced one month into the future, or the managers are missing the month of November in their wall calendars, because as we all know, it is far, far, far too soon to be putting up Christmas trees.

Happy holidays, everyone! I hope you are all warm and snuggly in your beds reading this on a laptop or an iphone and enjoying a day off, except for the people at the coffee place who I hope are working because I really want a Peppermint Mocha Twist. In the spirit of the season, here are some people who are doing good or need some help.

Heather at MamaVision is encouraging people to give to the National Eating Disorders Association via a link on her site. The funds will be matched by an anonymous donor. You can also leave a comment about why you donated which she’ll send to the NEDA.

Friend of the blog, Barb, is looking for a weigh-in buddy. Here’s how she put it, “Do you know somebody from blogland who would be willing to let me report my weight daily — starting now and going to through January, and perhaps to be extended beyond that if it proves to be an effective self-monitoring system?…Unless I have an external commitment to tell somebody else, I don’t do it. I dread the scale. So I’m looking for a system of accountability. The person I report to doesn’t have to respond or say anything or even actually read my email. I just need to know that I have to do it.”

Any takers? Leave a comment and I’ll send your info to Barb.

There are heart shaped Junior Mints! (And there’s a blog about candy. Wow!) How did I miss this? Back in my days of bad eating I would frequently stop my grocery cart at the end of the candy aisle and pick up a box of Junior Mints. Then the cashier would set them out for me when she was ringing up my order and I’d stuff them in my purse so I could snack on a few on the way home.

A couple months ago I saw a box of inside-out Junior mints with a mint shell and chocolate filling at a dollar store, but resisted buying a box. If I’d seen a box of these cute heart-shaped delights I might not have been so strong. Food that comes in a cute shape is somehow more irresistible, like pancakes in the shape of stars or tiny gummy bears, as if the food got itself dressed up in its best clothes to attend a party in your stomach.

Upon reflection, I wasn’t tempted by Valentines Day candy at all this year, which is rather odd since holiday candy is one of my bimonthly challenges. I guess my local Kroger needs to work on their product placement. I think they stick all their holiday candle in a middle aisle, which I avoid since I stick mostly to the edges of the store. I don’t even recall seeing a bag of candy hearts, which taste like sugar-flavored Tums yet have always been another weakness of mine.

I suppose it’s for the best that I was able to save up my holiday candy fighting power because now that V-Day has come and gone the next holiday candy challenge is Easter. Cadbury Cream Eggs. Peeps. White Chocolate Rabbits. Oh yeah, I’m going to need the reserve power or I need to get a seeing-eye dog so I can walk around the grocery store with my eyes closed.