Yesterday’s review of the Hungry Girl book sparked an interesting discussion question – does low-calorie food equal healthy food? The answer seems to be sometimes yes and sometimes no. It reminds me of the logic class I had to take in college where we’d have to decipher statements like:

All sparrows are birds

Not all birds are sparrows.

Some sparrows are black.

If Lulu is a black bird, is she a sparrow?

Except this is a more complicated since not all low-calorie foods are healthy and not all healthy foods are low-calorie. How do I write an “if, then” statement for that?

One of the reasons it took me so long to start eating healthy is because I couldn’t figure out what “healthy” meant. What do you eat when you eat healthy? Rice cakes? Tofu? It’s even more confusing because you have to look at a person’s overall diet and not just a single choice they make for one meal. They might eat oatmeal for breakfast, but then chomp on fried onion rings laden in trans-fat for dinner. Or they might be making a lot of low-calorie choices, but are eating so much packaged food that their sodium levels are higher than Lot’s wife. There are so many components that qualify a healthy eating style that you might be doing well in some areas and failing in others.

As many people pointed out, the Hungry Girl recipes use a lot of sugar substitutes and sugar-free ingredients that use – dun,dun,dun – chemicals! There seem to be two camps on the use of chemicals in foods, people who don’t want to touch anything that is not natural because they believe it’s bad for their bodies and people who don’t care as long as they can have something sweet with no calories. I admit, I’m one of the latter people who doesn’t care how much Splenda and Aspartame they pump into me as long as I can have something sweet to drink that is low-cal. However, I also understand why people are cautious about artificial ingredients. Your body is your most valuable possession and you get to decide what you put in it. I always wait until a software release has been out for a couple months before upgrading so the developers can work out all the bugs. I figure the people who are cautious about artificial ingredients are just waiting it out to see if we all develop an extra arm a decade from now. And, boy, are they going to be jealous when we do! Who wouldn’t like to have third arm? I would be an awesome drum player!

I also don’t believe that just because something is artificial it is bad or if it’s natural it’s good. Arsenic is all natural and it will kill you. Thousands of the medications we use today are artificial and save lives every day. All I would say is that the artificial products are newer and we might not know their full effect on our bodies yet. I’m willing to take the risk, but I understand why others don’t want to and fully support their decision. I’m lucky that I’m still rather young and I can chew on Tupperware and still feel okay. I’m sure as I get older that will not be the case and I’ll have to start watching things like my cholesterol or my sodium levels. But for now, I’m not too concerned about that stuff.

I know some people just don’t like the taste of artificial sweeteners. And other people are actually capable of putting one teaspoon of honey in their yogurt and stopping right there. I have never been able to do that. Instead, I find myself sucking honey out of a plastic bear’s head in the middle of the evening like a zombie eating Winnie the Pooh’s brains. So, in comparison to gorging myself on real sugar, eating a lot of fake sugar seems better by comparison.

There is also a theory that artificial sweeteners make you hungrier than eating natural sweeteners because your body is expecting to get calories when it tastes something sweet. When it doesn’t get those calories, supposedly this makes you want to eat even more than if you hadn’t had the fake sugar. I have no idea if this is true or not. There is the odd fact that people who drink diet sodas evidently tend to gain more weight than people who don’t. I will say, I lost almost 200 pounds drinking diet sodas all the way. It sure was a lot better than drinking normal sodas with hundreds of calories every day.

Perhaps that’s what it’s about, not necessarily having the best diet on the planet, just a better one. Maybe we shouldn’t aim for the impossible task of eating a completely healthy diet, just a healthier diet. You don’t have to be the healthiest eater on the planet. No one is going to give you a prize. But you can almost always make improvements to your lifestyle, so perhaps it’s better to focus on that.

Healthy eating is by definition supposed to be good for your health. I obviously didn’t get the memo. Earlier this month, I grated off a piece of my thumb while making latkes. This week, I cut myself horribly on . . .a box of Go Lean! Crunch.

Yes, eating cereal is now a health hazard. You heard it here first. I don’t know if the machine that assembles the cereal boxes was miscalibrated or they happened to sharpen their box cutting knives the day it was shipped, but the cardboard edge of my box cut into my pinkie as I was innocently pouring myself a sweet yet nutritious mix of seven whole grains. Think I have law suit material? I have now placed masking tape over the edge to avoid future incidents. 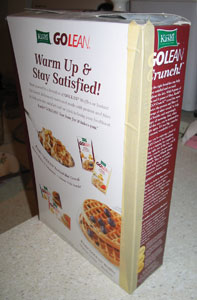 What’s next? Will I slip on a banana peel in the kitchen? Will my tongue get frozen to a no-sugar-added fudge pop? I fear to speculate.

In other news, I completely forgot my fat-iversary two days ago. As of January 15th I’ve been doing this healthy eating and exercise nonsense for three years. According to an article sent to me by the National Weight Control Registry as thanks for participating in their long-ass surveys, “after individuals have successfully maintained their weight loss for 2-5 years, the chance of long-term success greatly increases.” Go me! Another two years and I’ll have the stats completely in my favor. (The article is called “Long-term weight-loss maintenance” from the American Journal of Clinical Nutrition, Issue 82, 2005. Pages 222-225. I’m not putting that in MLA format because I don’t know how and I find that stuff boring.)

I was standing in a line four people deep at McDonalds, watching a fly buzz around the sweaty neck of the man in front of me, waiting to pay far too much money for a wilted Caesar salad, when I thought, “This is the stuff no one mentions when they say weight loss is hard.” 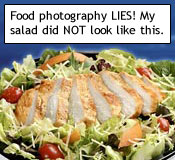 Fifteen minutes earlier I had been at my desk at work, feeling the beginnings of three o’clock hunger pangs, when I realized I hadn’t packed a snack in my lunch bag. Damn it! Why hadn’t I brought more cauliflower? There was no way I was going to make it another two hours to the end of the work day and then another 30 minutes driving home. I needed food. My easiest options were to grab a slice of yet another apple pie my coworkers had brought to work or to grab something from the vending machine, but I had vowed to stop sabotaging myself so I kept the lid on the pie and my quarters in my change purse. We don’t have one of those fancy South Beach Diet vending machines in my building, sadly enough. When I’ve forgotten to bring snacks to work before, I just ordered up a grilled chicken salad from the pub/restaurant downstairs, however they closed up shop last month. I don’t know what drove them out of business, the lousy food or the lousy service, but they’re gone now and they took their chopped lettuce with them.

So, I needed to find something healthy and nearby and hopefully cheap. Ha! I haven’t seen any roasted vegetable vendors on the street corners lately, so I was left with the three closest fast food restaurants: Hardees, White Castle, and McDonalds. Checking their web sites I found that the only salad Hardees served was a Southwest Chicken salad that didn’t look all that healthy. I’m also not fond of Hardees’ ads which are all about how manly, men must eat big, thick burgers, grrr, and they should walk up to a cow and bite it in the ass and chew its raw hind quarters to prove their manly, manliness. I clicked on White Castle’s site and found that they don’t even bother putting a half-way healthy item on their menu. No salads or wraps, just burgers and fried onion rings. I sort of admire that about them. No pandering, no bullshit. You came here for grease and cheese and we will give it to you.

So, McDonalds it was with their half dozen salad selections.After the documentary Supersize Me came out, I think they’ve made an effort to at least appear as though the have healthy options. I didn’t have any cash on me and I wasn’t sure if I could use my credit card at the drive-through, so I walked inside to discover one 4’11” cashier running one register with four people waiting in line ahead of me. Wasn’t this supposed to be fast food?

I waited in line for six minutes and was nearly toppled to the ground by a three-year-old who pushed past me to get to the drink machine. She sure was strong for a kiddo who eats McDonalds. I placed my order at the counter and started to slide my credit card through the machine, feeling ridiculous that I was putting a $4.19 charge on plastic when –

“DON’T SLIDE YOU CARD YET!!” the woman behind the counter shouted over the constant beeping of the deep fryer. I could barely see her head behind the register but I sure could hear her voice. “Wait until I’m done entering the order!” she demanded.

“Sorry!” I apologized, snatching my card away from the credit card machine that had come unbolted from the stand and was sliding onto the counter. My order came up two minutes later and I nearly ran back to the parking lot, out of horror or hunger I’m not sure. I popped the lid off in the car and gazed upon a truly uninspiring salad. The chicken breast was slimy and not even cut all the way through, leaving me to tear away at it like perforated paper. It laid in a trampled bed of lettuce and carrot slices, garnished with two little baby tomatoes. It was not fast. It was barely food. It was definitely not worth $4.19. But I ate it anyway and I stuck to my plan. And then I added cauliflower to the top of my shopping list.