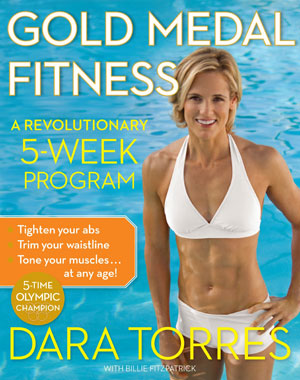 Disclosure: I received a free copy of this book to review.

You remember Dara Torres, right? She’s the forty-something, mom who has six-pack abs. You know, the one who swam her way to three Olympic medals two years ago, beating kids who hadn’t been born yet when she attended her high school prom. Depending on your outlook, she might inspire you to be fit despite your age or just make you feel depressed that you’re not in as good of shape as her. If it’s the latter, you now have a better chance at trying to keep up. Dara’s revealed some of the secrets of her training regimen in a book titled Gold Medal Fitness: A Revolutionary 5-Week Program written in collaboration with writer Billie Fitzpatrick.

The book has a conversational tone that intermixes Dara’s personal experiences with the technical information of her routine, making it an easy read. The program is based on what Dara’s learned about training smarter as she ages, and thus is targeted at women. As a swimmer, Dara’s program is focused on creating a lean yet strong body that is capable of explosive bursts of strength. The first section, “You Can Do It!” serves as a mini-pep talk and covers the mental attitude you’ll need as well as reviewing some basic nutrition. The second section, “Your Body as a Power Source,” covers the meat of her plan divided into sections on strength, stretching, cardio, and recovery. If there is a “secret” to Dara’s plan, it seems to be the section about Ki-Hara stretching. This is a technique that stretches and strengthens your muscles at the same time. This is also the section that features lots of pictures of Dara demonstrating stretches, like this one, which made me wonder if the Torres table would be coming soon to IKEA: 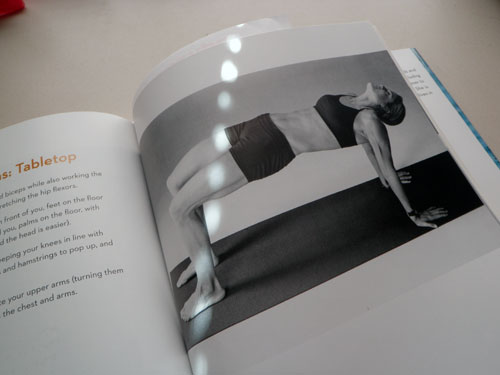 And this one, where you could sprinkle salt on her and call her a pretzel: 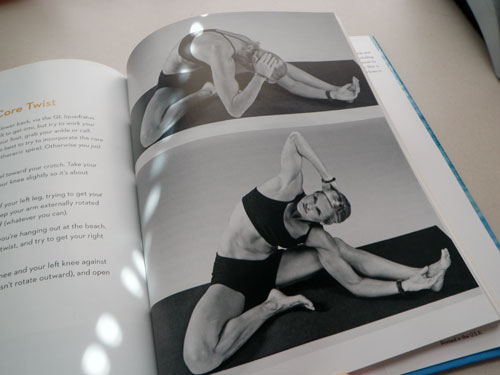 Now, no one is promising that you’ll make the 2012 Olympic team by following this program, but it is filled with good advice. I really liked the positive tone that emphasized fitness over skinniness. Dara overcame an eating disorder in her twenties and as she says now, “I’m not a dieter. I don’t even like the word.” Dara also encourages you to find the part of yourself that enjoyed running around as a kid, when exercise wasn’t called exercise, it was just fun. Be aware that some of the exercises require gym equipment and a stability ball.

Dara was also kind enough to answer a few of my questions, which I emailed to her. You can also follow her on Twitter at @daratorresswims. That’s where Dara tweeted that she will sign your book if you mail it to her with a self-addressed, stamped envelope. The address is 12441 Royal Palm Blvd; Coral Springs, FL 33065.

Q: For people who aren’t naturally athletic, it can be hard to imagine themselves achieving a fitness goal like running a 5K. You’re naturally athletic, but is there something else that you started out naturally unskilled at which you’ve gotten better at by applying the same training philosophies you mention in the book?

Yes, I was naturally unskilled at volleyball when I first tried it but I have definitely gotten better at it.

I like that you stress the importance of taking recovery time in training. I’ve noticed that when some of my readers start a fitness plan, they are so excited that they’ll burn themselves out in the first few weeks and then abandon the plan. How do you occupy yourself on the days you aren’t working out? Can you recommend any ways to turn off feelings of guilt that some of my readers might feel on rest days?

I used to go for a run on my off days but eventually I realized that rest days are needed. You should not have feelings of guilt because rest and recovery enables your body to get stronger and leaner so you won’t break down.

I know you travel frequently to compete and to give motivational talks, like you tweeted about at HP this week. When I’m traveling for work or on vacation, I sometimes use it as an excuse to vacation from healthy choices. Do you have any advice on how to bring your inner athlete with you on the road so you continue to eat well and maintain a fitness routine?

It’s all about discipline. When you have been eating well and have maintained your fitness routine up to a point, it’s important to allow yourself to cave into your cravings, not over-indulge, but to give your body what it wants and needs. When you’re on vacation you should enjoy yourself, rest and recover. Just don’t allow yourself to fall out of a routine completely so you can remain motivated after vacation.

Many of my readers have said they developed body image problems when they were young which still stick with them today. As a mother of a young girl, do you worry about her forming a negative body image like so many women do? And if so, how to you hope to guide her towards a positive view of her body?

I think every parent probably worries about their children falling prey to low self esteem or forming a negative body image. You have to reiterate to them that what they see on TV and in magazines isn’t real life. I try to remind my daughter that it’s not what is on the outside but what is on the inside that counts. It important to help her create confidence in her inner beauty.

You’re an inspirational figure who has motivated many people to exercise and take care of their bodies no matter what their age. Who motivates and inspires you?

My daughter motivates and inspires me the most, but I also draw a lot of my motivation from within myself.