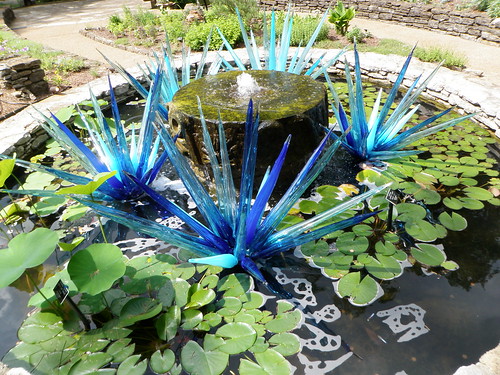 I was recently in Nashville, landing a great hotel rate because of the unfortunate flooding incident. When I wasn’t listening to radio ads for floor tiles sales and construction bargains, I visited the Chihuly glass exhibit at the Cheekwood Gardens. If you have a chance to go, I’d highly recommend it.

Dale Chihuly is a renowned American glass artist, who has a permanent exhibit here in Indianapolis at the Children’s Museum, which is the only reason I knew how to pronounce his name. The Cheekwood exhibit is part of a bigger Chihuly in Nashville celebration where his work is also displayed at the Frist Center downtown. Cheekwood is a 55-acre botanical garden and art museum which would have been pretty enough all on its own. When I visited, the glass sculptures had been installed all over the estate. Chihuly’s work is strongly influenced by nature, so you could almost believe Nashville happened to have glass flowers and plants flourishing in its soil.

I stopped to sit in a theater halfway through my visit to watch part of Chihuly in the Hotshop, a film that documented a week-long glass-blowing workshop. It turns out Dale Chihuly injured an eye in a car accident many years ago, so he constantly wears an eye patch, just like a pirate! I thought is was kind of badass. Also interesting is that Chihuly no longer crafts the sculptures that bear his name. He acts like a director, instructing the glassblowers on what to make. I guess he’s like the James Patterson of glassblowing. (James Patterson no longer writes all his books. Instead, he creates detailed outlines and employs ghostwriters to do the actual writing.)

One thing that puzzles me—how do they MOVE these things? I’m stressing out just thinking about moving a few dozen boxes of crap. I have no idea how they transport a 30-foot tall glass sculpture across states, or hang a huge chandelier without breaking it on a banister. Maybe they fill the shipping containers with lots of feathers? Or Styrofoam peanuts?

The exhibit will be running until October 31, 2010. Admission is $15 for adults. More information can be found here. A Flickr slideshow of my walk through the grounds is embedded below.

“Would you like a glass for your soda?” my friend Jenny asked after she handed me a can of Sprite Zero. Usually I just drink soda straight from the can, leaving me one less dish to wash and saving me all that time pouring. But when I’m visiting other people I like to pretend I’m not the low-rent individual that I am who has reused the same bowl three times without washing it, so I said yes.

Then she brought out the Charlie Brown glass. 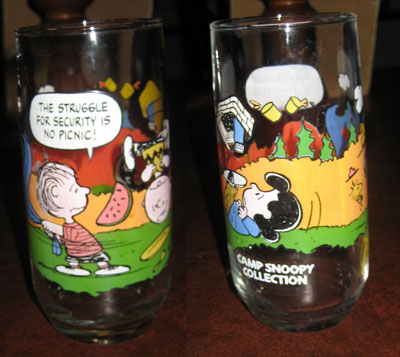 “OMG!” I exclaimed, only I actually said “Oh my God” instead of shouting out the acronym, because even I am not that geeky. “We used to have glasses exactly like this! From McDonalds!”

“Oh, we never went to Burger King. We were McDonalds people,” I said as I admired the glass. It was perfectly preserved, as if someone had reached into the china cabinet directly into 1984. Our McDonalds glasses took hundreds of trips through the dishwasher until their imagery was washed away along with the sticky soda residue at the bottom. We also had Muppets glasses that suffered a similar fate.

It was so bizarre, finding a piece of my childhood sitting in my friend’s boyfriend’s mother’s china cabinet. It triggered a memory I hadn’t known was sitting in my brain. It reminded me that yes, my past actually did happen. Here was proof, printed on glass and filled with tasty diet soda. It was as though a fragment of the 1980’s had fallen through a wormhole and was now appearing in the present even though it didn’t belong there.

This type of thing hadn’t happened since…a week ago at La Hacienda when they served us salsa in a bowl just like our old wooden kitchen bowls. These were bowls we threw out because the laminated, molded, wood started to splinter, and you don’t want to get a splinter in your tongue. On that memory, I only had one chip of salsa. Before that, I hadn’t had a flashback triggered by a physical object since I’d walked through the Rathskeller’s dining room, furnished with our old dining room chairs. I didn’t want to steal the chairs or the splintery wooden bowl, but I wanted to steal the glass, the cheap, McDonalds branded glass. I kept my kleptomaniac urges to myself though, and instead gushed over the dinnerware.

“You are so easily amused,” my friend said. Yes, I am. It makes life so much more delightful.