I was rather saddened by the comments on a recent giveaway post which revealed that many of you don’t have gym bags. Instead, you’re using plastic bags or stuffing items into your athletic shoes which you carry into the gym. So, when Subway approached me about their Commit to Fit giveaway, I took them up on it if only because I have the chance to give another one of you an actual gym bag, and lessen the chance that you’ll confuse your groceries with your gym clothes. (Please don’t eat your sweat socks!)

The Commit to Fit program is based in part on the goal of Jared Fogle aka Jared the Subway Guy to run the New York City Marathon this year. I met Jared in Indianapolis a few months ago, see! 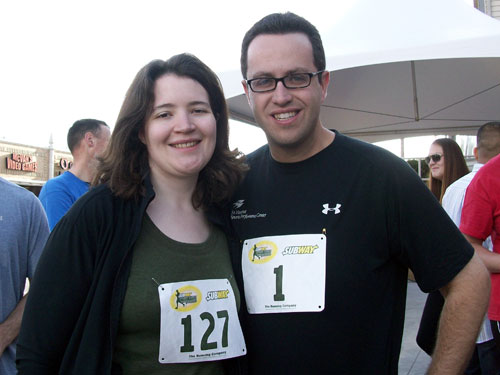 Not only is he tall, he’s maintained a massive weight loss for over 10 years, which is deserving of a round of applause. No, really, please clap for the man. If you’re reading at work, golf claps will do. I also applaud Jared for training for a marathon. I ran a half-marathon a few years ago, and Subway would have to give me much more than a free gym bag to convince me to run a full one. Actually, they’d have to give me lots of money and promise that I could land in a bed of cupcakes at the end.

The idea behind Commit to Fit is for you to set your own fitness goal. You don’t have to run a marathon (thank God). I have been in a bit of a fitness slump the past year, so when I was considering whether to participate in this program or not, I was swayed by the hope that it will be a good motivator to get my own butt in gear. (It has also forced me to learn how to spell “commit.” Two Ms, one T. Take note!) I still haven’t decided on my fitness goal, but it will probably be something like a 5K race or signing up for a class I’ve never taken before, like Zumba. (Suggestions are welcome.)

You have to dress for success, so even though I haven’t decided on my goal, I can start looking cute for it. As part of the “Getting Pumped Up in Style” giveaway, Subway has provided for me a Gaiam gym bag, yoga mat and $50 gift card to Lulu Lemon, a retailer of yoga-inspired athletic apparel. You can win this prize in this giveaway. 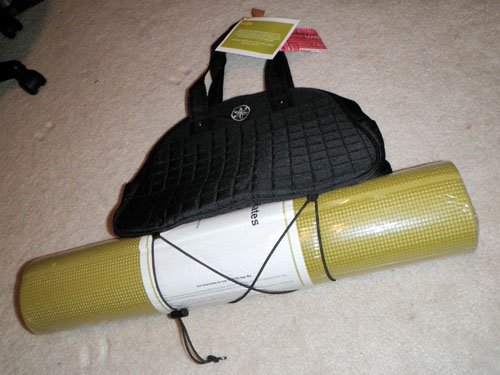 To enter, leave a comment on this post either 1) stating your own Commit to Fit challenge or 2) if you have a problem with commitment, you can suggest a challenge for me. Only residents of the US may enter. (Sorry, my foreign friends.) The contest ends at 11:59pm on Sunday, October 10th 2010.

Subway also has a Commit to Fit page on Facebook that explains it in more detail and gives you the opportunity to win more prizes. There will be a few more Commit to Fit posts in the coming weeks, and a few more giveaways, so even if you don’t win the gym bag you’ll have a chance to not win something else later.

Disclosure: The prizes listed in this post were provided for free.