Filed Under: friday the 13th

As a chronic sufferer of Paranoid Traveler’s Syndrome, it was almost a moment of triumph when the airline lost my bag. Finally I could say, “See? I told you something like this could happen!” It also led me to understand why everyone crowds around the boarding gate trying to be the first one on the plane. Before Friday, I thought these people were stupid. All the passengers are going to leave at the same time, so why spend more time crammed into the plane than you have to? The answer is: So you get space in the overhead bins to store your luggage.

I was one of the last ones to board my flight from Indianapolis to Minneapolis because my seat was towards the front of the plane. When I got to the door of the airplane, there was no room left in the bins, so they told me I’d have to check my bag. The flight attendant attached a tag to it and asked me what my final destination was. “I’m going to Los Angeles!” I said because that is the city I have been reading about in the guidebooks and that I have been arranging an itinerary to see. It was only five minutes later when I was in my seat and had time to look at my ticket that my blood pressure skyrocketed to astonishing heights. The flight attendant had written LAX on the ticket. I wasn’t going to LAX! I was going to Santa Ana! Aaaaaaaah!

I caught the attention of a flight attendant, but by then the bag was gone. She told me to talk to a gate agent in Minneapolis, which I did. The agent requested a reroute of the bag and when I boarded my connecting flight, the agent there said they thought the bag was aboard. Except it wasn’t. I arrived at Santa Ana, stood at the baggage carousel, and finally, the nightmare I’d always had came true. My bag was not there.

My driver was an extremely helpful man who knew where the baggage claim office was and also had the address of the hotel written down. Thank you Mr. Driver Man! He also speaks five languages and has a son studying to be a neurologist and another son studying to be a physicist. I filed a claim and hopefully my bag will turn up. My business card is on the bag label, so unless the staff is completely incompetent (which is still a possibility), someone will get it to the right place. It is probably at LAX or Minneapolis. Hopefully it will get to me before my clothes start to smell.

Luckily, I had the presence of mind to move my pill box out of my lost bag and into my backpack before sending my luggage into the abyss. Which was good because OH SWEET JESUS my head felt like a carved Butterball turkey. Stress = pain. I also have my purse, my cell phone, my laptop, and the items that are most valuable to me. Thankfully the only thing in that bag was my clothing, a book I own, and a library book. I can live with losing the clothes, but, man, the library’s going to be pissed if I don’t return that book.

Update: I wrote this post Friday night, but by Saturday morning, my bag and I were finally reunited! I guess you can never really lose your baggage. 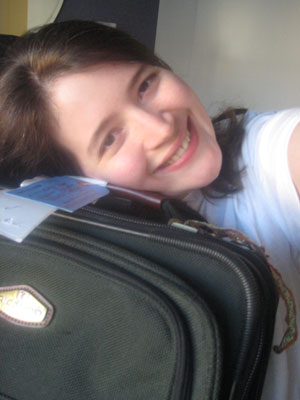