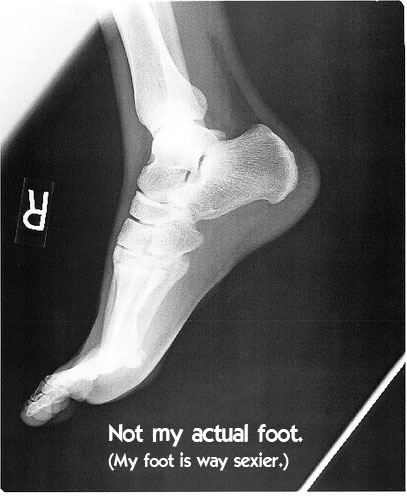 Photo by akeg / by Attribution-ShareAlike 2.0 Generic

For those of you concerned about my foot pain saga (there must be at least one of you, right, Mom?), I saw the podiatrist today. She felt up my feet, took some x-rays and told me I most likely have tendonitis and I most definitely have flat feet.

I knew I had a flat chest, but the flat feet thing is new to me. Can we complete the trifecta and get me a flat stomach, too? I’m not sure if I’ve always had flat feet or if my morbid obesity helped flatten them or if it’s a new thing unrelated to that. Regardless, I am no longer supposed to walk barefoot. Anywhere. Even if I’m just shuffling around the house I need to have sandals with a good arch support. She recommended some brands for that.

She also sprayed my foot with glue and taped it. I’m supposed to keep the tape on for the next five days and see if it helps with the pain, and if so that means an orthotic or just the shoe change should probably help cure it. (So far it does seem to help, so that bodes well.) The glue will help the tape stay on even in the shower, though now I’m wondering if I’m supposed to wear shoes in the tub too. That gives me flashbacks to my college days and how grateful I was that I couldn’t see anything in the shower stall because of my poor vision.

I’m also supposed to take a non-steroidal anti-inflammatory drug (NSAID) every day (like ibuprofen) since tendonitis is basically an inflammation of the tendon. This presents an interesting dilemma because every single one of my headache doctors agrees that you should not take more than 2-3 doses of anti-inflammatory medication a week or else you will get a rebound headache. So, what do I do here? Do I take NSAIDs daily for my foot and put up with the headache? Or do I only take a moderate amount of NSAIDs, severely limiting the anti-inflammatory effects of the medication, and put up with a longer stretch of foot pain? It is a conundrum. I probably should have asked the doctor about this, shouldn’t I have? Maybe we should just cut the damn foot off and give me a robotic replacement with a can-opener attachment and increased ass-kicking functionality.

I’m supposed to go back to the doctor in three weeks to see how things are progressing. I hope changing my footwear solves the problem. If not, maybe I’ll just learn to walk on my hands. 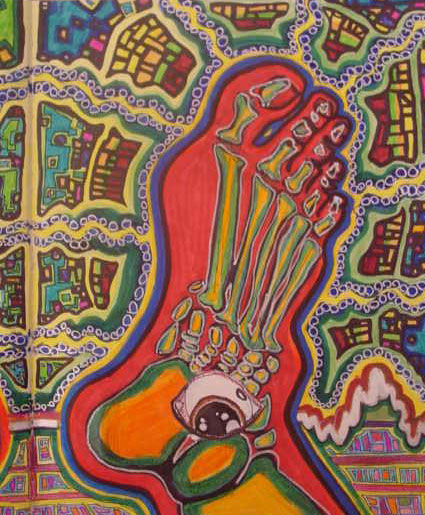 Photo by ambientfusion / by BY-NC-SA 2.0

If I could have one wish I think it would be to have a year without any medical problems or injuries. Not a lifetime, just a year! I’d like one sweet, sweet, year when my body would function just as it was supposed to. Alas, this will probably always remain a fantasy. I always tended to injure myself when I was running or training for races, and even though I’m not training for anything right now my right foot is causing problems.

I don’t remember the day my right foot began to hurt (kinda like I don’t remember the moment I got my headache), but it was sometime around late December 2010. I felt a pain in my arch whenever I walked, but it felt fine when standing or sitting with no weight on it. I thought it would just heal with time, but it started to get worse, particularly after I did anything active that required bending my foot, like, oh, WALKING.

I decided I needed to see a doctor, but I waited until February to schedule an appointment because that’s when my COBRA ran out and my state-sponsored health insurance for sickos kicked in. Little did I know that it would take TWO MONTHS to get an appointment with a general practitioner. I might have been able to get in sooner if I’d bitched about it, but the foot wasn’t really an emergency, so I just waited.

When I did get in to see the doctor in early April, she took a look, didn’t find anything obviously wrong and decided to send me to a podiatrist. So I have to wait ANOTHER MONTH to get an appointment with that expert. I wish I’d known all this back in January and had just scheduled an appointment with the foot doctor for February. But I didn’t, so here I am, having walked around on a dodgy foot for four months before I can get an expert to tell me what’s wrong.

It’s particularly frustrating because it makes exercising more inconvenient. Yeah, I can bike or swim or yadda, yaddda, yadda, but the best exercise is the exercise you actually do, and for me that’s always been walking and running. I like that it’s basically idiot proof (though maybe I am disproving that assumption). I like that it’s meditative and gives me time to just think. I like that it allows me to wander about the city and feel more connected to my community. I miss it.

Part of me wonders if they’ll take an x-ray and I’ll learn I’ve been walking on a broken foot all year. It would kinda suck to go to FitBloggin’ on crutches. My doctor said a broken bone was unlikely, though, so I might just end up getting a special insert for my shoe. Or maybe I’ll have to weird really dorky orthopedic shoes. I hope this doesn’t turn into something like Shauna’s dodgy knee saga back in 2006 where I learn if I’d done something sooner I could have prevented more damage and drastically shortened my recovery time.

For anyone who’s about to diagnose me, I don’t think it’s plantar fasciitis. I had a case of that about 8 years ago and my current pain doesn’t feel like that. The plantar fasciitis pain was focused on the bottom of my foot near my heel, whereas my recent foot pain is located in the middle of my arch. Also, the pain from plantar fasciitis goes away as you walk around because you’re warming up the muscle, making it stretch and making it more flexible. This recent pain hurts no matter how long I’ve walked and actually gets a bit worse the more I do walk.

The strangest twist in all this is that my foot feels best when I’m wearing high-heeled boots. Go figure! High heels are supposed to be all kinds of evil for your feet, but for whatever reason they seem to take pressure off of my trouble spot. I’ve been a strong hater of everything high-heeled for most of my life. I’ve always considered high-heels to be uncomfortable and unnecessary since I’m already 5’9″ without them. But I was charmed into buying a pair of boots with a 2.5″ heel on sale, and now I’m sort of coming around on the issue.

Off-topic: Do people in foreign countries measure heel height in centimeters? I’ve never thought about this before and it now seems rather odd to me. Does this affect shoe production and design?

Last Sunday my training schedule called for a 90-minute run. The weather was actually above freezing and there were no abominable snowman on the trail. My nose hairs did not form nasal popsicles when I walked outside.

So, of course, this is the week I injure my left foot.

Some days I might be happy to use an injury as an excuse to avoid a long run. Instead, I’d been looking forward to using a long run as an excuse to have a Coco Loco, a chocolate truffle surrounded by coconut cake and glazed with caramel. No 90-minute run for me. No Coco Loco either :(

It’s all been rather tragic. Last Wednesday it was 50 degrees out and I came home 90 minutes before sunset, leaving plenty of time to run on the trail without three layers of insulation. Only I couldn’t, because I’ve developed a sharp pain on the underside of my foot when I walk, not always, just sometimes when I distribute my weight in certain ways. I suspect it’s an overuse injury, a strained ligament or tendon or something. The best way to attack an injury is to catch it early, ice it and rest it, which is what I’ve been doing. This weekend I tried not to leave my apartment, which wasn’t too hard since that’s how I spent most of my college years. Ha, ha, ha…how I wish I was kidding.

It seems to be helping because the pain has receded, though it doesn’t yet feel healed. It’s happened in a fairly good spot in my training schedule since next week calls for a cutback in running. (30 minute runs instead of 45!) However, it effing sucks. It’s beyond frustrating when my body cannot keep up with my mind. I’ve been using the elliptical machine at the gym instead of the treadmill, but it’s such a letdown. I don’t want to ellipticize, I want to run! I also find it difficult to push myself hard on the elliptical. If I stop on the treadmill, in the best case scenario it sands the zit off my face. If I stop on the elliptical, the machine turns off. Oh my God, how horrible.

However, I am reminded of Deena Kastor, a featured marathon runner in the film Spirit of the Marathon which I saw recently. During the film, she injured her leg or foot or some appendage, and could only run in a pool for several months. When she talked about recovering from the injury, you could tell she was upset that she couldn’t run for real, but she kept a positive attitude and worked out in the gym as best she could. (And damn, she lifted weights so rapidly it SCARED me.)

So, I will ellipitcize and I will pray that my foot heals. And no matter what, I’m completing the damn half-marathon in six and a half weeks. If the bus trailing behind at an eighteen minute per mile pace tries to pick me up off the course, I will beat them off with my crutches if need be. Hopefully my foot will just heal itself, I’ll try not to increase my mileage too rapidly, and all will end well – including me at the finish line.