I had intended to write an entry today about the annual Quaker Oatmeal Festival held in Lafayette, Colorado. I imagined posting images of the world’s largest topping bar and telling you everything I learned about acupressure at the health fair. However, it was not to be. I was unable to attend the Oatmeal Festival due to unforeseen circumstances, namely THE SUPER SCARY MOUNTAIN PASS OF DOOM. 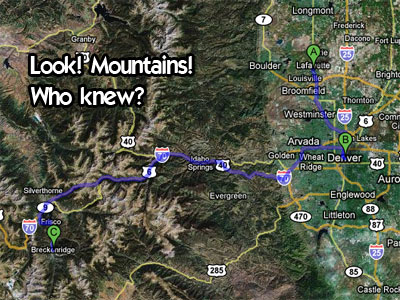 My brother, Jim, and I landed in Denver Friday night as the sun was setting, picked up our rental SUV and headed out for Breckenridge, Colorado, where we would be staying for 3 nights. Breckenridge is 80 miles west of downtown Denver and the oatmeal festival is about 20 miles north of downtown Denver. That meant there was a whole lot of driving to be done that evening, the next morning, and directly after the festival. In retrospect, I should have more carefully examined the itinerary and requested that we stay in Denver the first night. However, I’ve been suffering from constant chronic pain lately, and I’m lucky to be able to plan my lunch for the day, so I did not do this and did not realize this problem until we were driving into the mountains…after dark…in the snow.

Which is where the snow weasels live. (So I hear.) 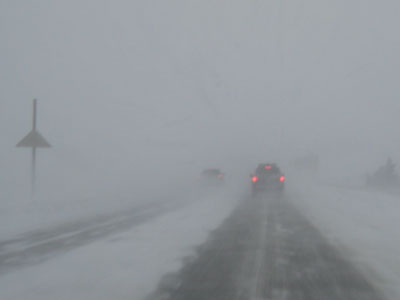 As we headed past steep drop-offs, the cars in front of us started to kick up snow and salt. Jim turned on the windshield wipers to discover the driver’s side wiper was operating more like a snow smear-er. He squirted the glass with washer fluid, which had been replaced with paint and further obstructed his view. This was for the best because he could not read the signs that said “Avalanche Area” and “Falling Rocks – 2 miles.” Nor could he start tensing all the muscles in his neck and send a chronic headache into overdrive by reading the signs that said, “It is unlawful for commercial vehicles to pass this point without chains” and “7% grade for the next 8 miles.”

It was all downhill from there, literally.

As we proceeded through the mountain pass at a terrifying 20 mph, we were confused by the speed limit signs reading “65 mph.” My only comfort was that there were several other cars on the road with us, so if we went careening off the edge, one of them would probably call 911. I started to regret not getting the insurance at the rental car agency. 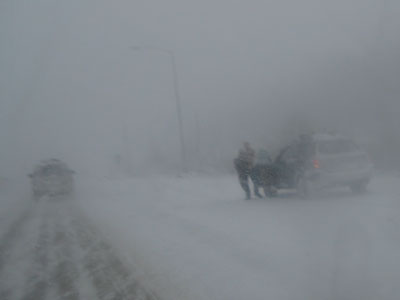 I looked up as we passed mile marker 265. We were headed for exit 203 at Frisco, over 60 miles away. We proceeded through the mountain pass, my brother hunched over the steering wheel to see through the clear spots on the windshield.

“Wow, I’ve never seen a semi truck being loaded onto a tow truck,” I said as I looked out the side window.

“My foot is numb,” he told me. “I’ve been riding the brake forever.”

“We’ll be fine,” I chanted. “Just fine. I know we’ll be fine.” If his eyes hadn’t been glued to the road he would have glared at me.

“What do those purple signs say?” He asked. I glanced at the circular sign he was referring too. “Adopt a highway. In memory of John Smith.” 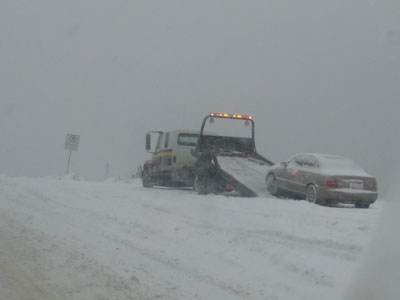 We saw a slimy Motel 6 after 40 miles and considered stopping for the night. However, we didn’t want to sleep on top of the covers. Finally, we got to exit 203.

“And now it’s only 10 miles south to Breckenridge!” I told him.

“Sorry, I didn’t have the heart to tell you earlier.” 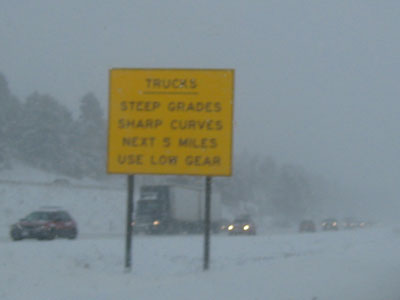 We continued south, into the cold, desolate tundra and through a roundabout. My brother unclenched his teeth for a moment to ask, “Why the hell do they have roundabouts out here?”

“Because you don’t ever want to stop in this snow,” I replied.

“Oh. That actually makes sense,” he agreed as we maintained out momentum around the circle.

We sojourned onwards, into the quaint little town of Breckenridge, nestled between the scary mountains of death.

“This had better be the quaintest town in America,” I mumbled. We passed a steak and rib joint and my brother said, “We are sooooo having steak tonight. Where do we turn?”

I looked at the map and replied, “We turn right at S. Park Avenue.” Jim erupted in giddy laughter. “Ha! South Park Avenue.” I looked at him, wondering if delirium had finally set in. Then I got it. “Oh! Ha! South Park! Like the TV show!” And then I started laughing. And Jim was laughing. And we were both laughing far harder than the joke deserved. We giggled uncontrollably as we rolled slowly down the street, happy for a momentary release from the stress of the past hour and a half.

Finally, we found our hotel, figured out how to access the underground parking garage and collapsed in our room.

“Do you have ibuprofen? I have a horrible stress headache,” my brother asked.

“No, but I think there is aspirin in the vending machine.” I said.

“In Indiana, if you slip off the road, at worst you flip your car over or run into a retention pond. If we’d slipped off the road here – game over.”

“I know,” I said. “I had no idea it would be so bad.” I paused for a moment. “Screw the oatmeal festival,” I said. “I love oatmeal, but it’s just not worth risking my life for.”

So, that is why I blew off the Quaker Oatmeal Festival. I called and made my apologies and sent further regrets via email. I offered to cover the event in some other way, but the organizers and the PR lady said that wasn’t necessary and were very polite and understanding about my non-attendance. However, I’m fairly certain I won’t be invited to any more oatmeal-related events in the future. That’s understandable since they went to a lot of trouble to send me out there to attend the festival.

I feel very badly for not being able to attend and have spent many hours feeling guilty and stressed about how events played out, wishing I’d had the foresight to ask to stay in Denver or request a driver to the festival. However, I handled the situation as best as I was able and I do not regret my decision. If that puts me on the Quaker Oatmeal shit list for the rest of my life, so be it. I would rather be alive and hated than dead. I am also certain that whenever I pass Larry, the Quaker Oats man, on a cylinder of oatmeal in the grocery store, I will see his accusing glare and shiver slightly with fear at the memory of that awful journey. 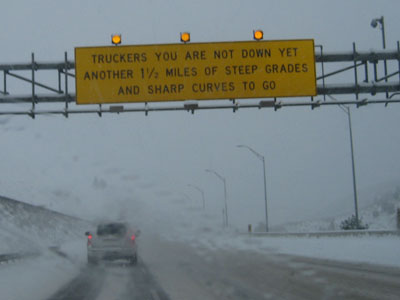 The drive back to Denver on Monday morning was both better and worse. Better because it was daylight and we could see. Worse because we could only see 20 feet. It was snowing and the wind was gusting. At least this time we knew what to expect, but the daylight made it easier to see the motorists stranded on the side of the road and to read even more scary signs like, “Don’t be fooled! 4 more miles of steep grade and sharp turns ahead” and “Emergency truck ramp” and “If your brakes fail, stay on I-70, do not exit.” I was fully expecting to see a sign that read, “Do not enter unless your last will and testament is in order.”

We drove on for miles with the defrost turned up so high all the other windows were fogged up. We wiped off the moisture with our hats. Finally we reached Denver, where the highways were plowed and the snow had stopped reigning down and we squealed with joy. We saw the truckers lined up on the side of the road, waiting for the snow to stop before entering the mountains, and hailed them for their wisdom. After we arrived in Indianapolis, we got back on I-70 to drive home, only this time we could see the pavement. We turned on the radio.

“A snow advisory is in effect…” I held my breath. “We’re expecting 1-2 inches in the metro area tomorrow.”

Then we turned the radio off and drove home at 65mph.