I was circling the block around the downtown YMCA last Monday, looking for a parking space that did not exist, when it occurred to me that I was a total dumbass. I was going there to run. Why didn’t I just walk three blocks? It would be a good warm-up and save me the trouble of parallel parking. So I returned to the parking garage at work and lifted my gym bag out of the trunk when I had another realization. I was taking my gym bag to the gym. Woah! That’s probably why it was called a gym bag. I hadn’t had a revelation like this since the time I played tennis in my tennis shoes.

I’d avoided going to the downtown Y in the three weeks since I’d joined because it was c-o-o-o-o-o-ld. (So cold that I shiver even now saying the word c-o-o-o-o-o-ld.) I would only have left my workplace during the day if it was on fire, and at least then the flames could keep me warm. When temperatures finally rose, I too rose (from my desk) to see if the downtown YMCA was skanky. It’s definitely not as shiny as the YMCA near my apartment. It’s what you think of when you think of a stereotypical YMCA – wood paneling, serviceable yet unextraordinary equipment, and an old hall with basketball courts and middle-aged men shooting hoops.

In an uncharacteristic move, I asked for directions before I got lost. Usually I pretend I know where I’m going, until I try to exit through a broom closet and blow my cover. It was a good move on my part because the Y is a maze. Even with directions I tried entering the men’s locker room on my way to the treadmills and tried exiting through the door to the manager’s office. They don’t have as much equipment as the shiny Y, but I liked the low-key, stinky, warm vibe of the place. People were there to work out, not to look pretty.

My trip to this Y marked the end of my perfect 27-year streak of never showering in public. I have been quite the crafty one, taking PE over the summer, signing up for band so I didn’t have to take gym, and living in a college dorm with private shower stalls. However, I don’t want to get a reputation at work as “the stinky girl,” so I finally had to strip down in a public. I’m glad this place isn’t popular because I didn’t run into anyone in the locker room on the first day. This gave me time to find the more private nook of lockers where I can face the corner and pretend no one might see me changing clothes. The key is to avoid eye contact. That’s what guys do at urinals, right? If I don’t see anyone looking at me, I can pretend that they’re not! In return I don’t stare at anyone else and we can all live in a happy land of denial where no one is ever naked.

The locker room is below the fitness area, so there is a constant thump-thump-thump sound of people running above us. I hope this place never has a termite problem, otherwise when the ceiling collapses I might be really showering in public. The second day I took a shower, I heard a wailing sound and momentarily thought a tornado siren was going off in the distance. I suddenly had visions of being trapped, naked and wet, in the YMCA showers under a pile of rubble after high winds ripped the building apart. Then I realized the sound was coming from the pipes in the shower next to me, which left me to focus all my death scenarios on the small black spots on the ceiling which might be deadly, poisonous, killer mold. . . from Mars. I showered quickly.

Even though I only spent about 30 minutes running, my entire trip to the Y took about an hour and a half. This seems rather ridiculous, but all the time it takes to walk there and back, change clothes, stretch, and shower, adds up. I’m still streamlining my logistics too. I’ll probably be able to cut down the time a bit once I stop asking questions like, “Should I leave my keys in my pocket or but them in the bag?” or “Should I take the extra minute to lock the locker and then unlock it again while I blow dry my hair or should I just put everything in my bag and set in on the counter next to me?”

I walked back to work and stopped at a grocery store to buy some fruit and deodorant. I ate one and rubbed the other on my body. You figure out which. I offhandedly used to wish there was a fruit stand at my old workplace, instead of just a vending machine, and now I seem to have gotten my wish. I won’t face any situations where I wait 10 minutes in line at McDonalds to buy a crappy salad just to stay on plan. This drills home the fact that successful weight-loss depends on a balance of determination vs. convenience. If you are extremely determined, you can lose weight even if you can’t afford a gym or lean meats. If you live right above a gym or slaughter your own barnyard animals, you don’t have to be very determined to live healthy. But, as one of these factors decreases, the other needs to rise for you to remain successful. Here’s the concept in handy graph format, sort of like the chance of precipitation on a weather map: 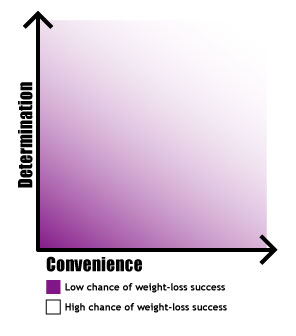 I’m glad that I’m living in an environment that makes it easier for me to live healthy. I really like breaking up my day by going to the gym in mid-morning, something I’ve never been able to do before. I enjoy feeling like I’m part of a little community downtown where there are grocery stores and gyms and restaurants. I like going to the Y, even if it is kind of stinky, because I’ve got convenience and a grocery store on my side and as long as they keep Secret solid in stock I don’t have to be stinky myself.