Someone will have to explain this sign to me: 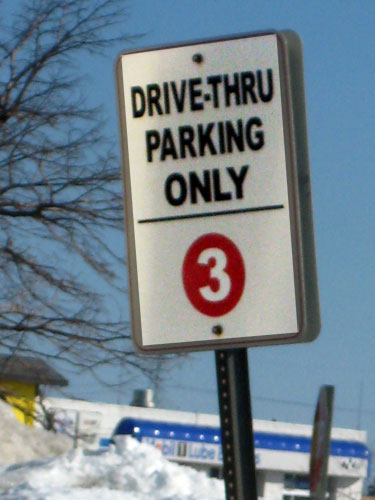 As my life gets more complicated, so does my tax return.

When I first entered the work force and I had to fill out a W-2 form, I looked at it in cross-eyed confusion. Exemptions? Wha’? When I got my first pay check I was giddy and excited…until I saw all the money they took out for taxes. And when tax season came I only filed a return because my mother told me to. She volunteered to be my personal accountant and didn’t charge me any fees. I just signed my name on the line and trusted that she knew what she was doing.

Then I started to make money outside of my full-time job and became utterly confused about Schedule C’s and 1099 forms and self-employment tax. Was I supposed to be making estimated tax payments during the year? Huh? What? So I eventually cracked 6 years ago and paid $20 for software instead of trying to read and understand all the forms. TaxAct asks me odd questions, like whether I own farm equipment or if I had depreciation this year, but it also takes care of all the tricky stuff that comes with freelance income. It also reminds me that I get points off my return for being a renter, paying tax on student loans, and for all those medical bills last year.

Most of the time spent on my return is spent adding up all these miscellaneous expenses, trying not to forget anything. How much did I spend on postage? Domain names? Don’t forget to count the PO Box charges! Then I had to nag someone for a 1099 form that they were supposed to send but never did. If there were any discrepancies between what they reported and what I reported, I’d practically be begging the IRS to audit me. And the medical expenses, dear God, the medical expenses. It took hours to organize all the receipts and claim notices and prescriptions to figure out exactly how much I’d spent, praying and hoping it was a high enough amount to get a higher deduction. Otherwise all the time would be for naught.

I’ve considered getting an accountant, but I don’t want to spend the money on one. I seem to be doing ok figuring out all these numbers on my own. $20 isn’t that much to spend and it’s more than my mother pays. She’s hardcore, working out all the numbers with pencil and paper on the kitchen table.

After working on it on and off for several weeks, I finally filed my tax return this week. For the first time in a long time I’ll be getting a federal refund. I’ll try to focus on the refund and not all the money I paid in estimated taxes during the year. But at least I didn’t forget to write off the tax software as a business expense.