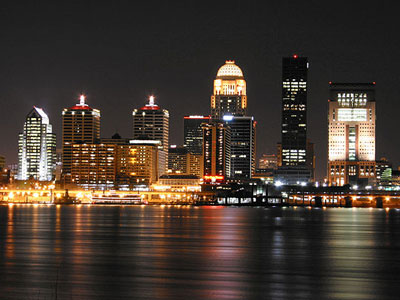 I watched a woman pull into the driveway where I had my first car accident which involved a blue Ford van and a sideview mirror. Then she carried groceries into our old kitchen and I looked through the windows to see they’d had new cabinets installed. I wondered who lived in my old bedroom now, and if the BB gun hole was still in the window, shot there by the previous owners’ sons. I bet the woman in the driveway didn’t know they used to grow pot in the basement.

I don’t get down to Louisville that much anymore. Almost all of my high school friends have moved away, just like me. But it is one of the few cities in this country that has my memories seamlessly integrated into its edifices. I can’t drive down a road without triggering a memory. There’s the house where my best friend in 8th grade lived before her family moved somewhere only the army knows where. There’s the music store where I learned to play flute and met the man who plays the trumpet at the Kentucky Derby. There’s the pet store where I got a cuddly little guinea pig who used to rattle her cage to beg for lettuce.

But every time I drive across the bridge into Kentucky, I notice that the building with the curved top is not supposed to be there, though it was built years ago. The Vogue Theatre where I first saw The Rocky Horror Picture Show is now a clothing shop. The Hallmark store I visited to harass a friend during his work hours is now a tapas restaurant. The Winn-Dixie has been obliterated, replaced by a prefabricated, yuppy mall with roundabouts and cobblestones. They’ve widened Westport road. And the purple house at the end of our street, the one that lit up so bright during Christmas that I never missed the turn, has been painted a respectable taupe color and is missing its gaudy lawn ornaments. I think its owners moved away too.

I know the roads of this town, but I recognize the city less and less. I see so much that is no longer there. I guess cities are like people. They tear themselves down and build themselves up. They change without asking your permission. I will always remember my city the way it was, but now I see what it has become, and I have to accept it as it is.