Instead of touring around the country, I’ve decided to stay inside my apartment and tour several blogs instead. From today until early March I’ll be making weekday stops at different blogs to discuss my book, Chocolate & Vicodin. We’ll be talking about how to cope with chronic pain, what makes a good author photo, how to stay fit and healthy when your unwell, how the publishing process works, and lots more.

I’ll be updating this list with links to the specific posts as we go along. I hope you’ll check them out! Big thanks to everyone who’s hosting me on this tour.

Behold, the grand unveiling of the CHOCOLATE & VICODIN book trailer:

Yes, books are now required to have video trailers. When I say “required,” they are not actually required, you are just highly pressured into making one, like babies are for couples in their 30’s. When my first book, Half-Assed came out in April of 2008, video book trailers were just starting to become the norm, but no one told me that until after the book came out! So, I threw something together using my weight-loss progress photos that came out fairly well. (48,000 views can’t be wrong, right?)

This time around I decided to seek advice from actual publishing professionals before making my trailer. I also viewed some trailers to figure out what works and what doesn’t.

Research. (Yes, spending hours on YouTube can be considered research)
Rachel Kramer Bussel is an author friend who’s done lots of (Not Safe For Work) book trailers, and she said to keep it under two minutes and to make it match the tone of your book. It also shouldn’t be an ad, since no one wants to watch an ad (unless it’s one of those creme de la creme Superbowl ads). She said, “The main point is to catch people’s attention and get them to watch the video, rather than a hard sell on the book.”

I searched YouTube for “book trailers” and came up with some very good and very bad trailers. There are a lot of awful gothic/supernatural/romance trailers that feature lots of moody establishing shots, interspersed with titles, and a melodramatic soundtracks. Thankfully there are also some good trailers. Here are some of the best I found, all of which made me want to learn more about the books they advertised:

Night of the Living Trekkies
Quark Books is a publisher most famous for Pride and Prejudice and Zombies. They also clearly spend mad cash on their trailers. This looks like a trailer for an actual film, not just a book. Honestly, I think the book would be a letdown after seeing this trailer.

Leviathan
This one has great animation and gives you a good taste of the storyline without giving it all away. But like the previous trailer, it’s way outside my budget and realm of expertise.

The Happiness Project
This one looks like something I could make, the animation coordinates well with the music, it gets the point across and overall seems to express the tone of the book.

Harlot’s Sauce: A Memoir of Food, Family, Love, Loss, and Greece
This one makes hilarious use of YouTube’s captioning feature, which makes me think the book is probably pretty funny, too. The production values also seemed within my reach.

Planning (to do awful things to teddy bears)
I wrote up five script treatments for trailers, which are just short summaries of what the trailer would be. I picked the one I thought would play best visually. (You can’t really film a headache). It featured a stuffed animal undergoing various treatments that didn’t cure my headache. I had considered showing myself undergoing treatments, but that would be harder to film since I didn’t want someone sticking needles in me unless they were professionally accredited to do so. I also thought abusing a teddy bear and making it smoke pot would be wonderfully ridiculous (but I might just be twisted). I liked this approach because it didn’t require me to appear in the trailer, which would have made me feel self-conscious. I prefer not to be the center of attention.

I wrote out a full script describing what titles would flash on screen and what visuals I needed to film. Then I made a list of all the props I’d need. I purged a lot of my possessions before I moved in last July, so any stuffed animals I had left were ones that I didn’t want to maim. Instead I had to go to Toys R’ Us for the first time in I don’t know how many years. I felt like a truly depraved individual as I shuffled up and down the aisles amongst parents and their innocent lil’ children while I was thinking, “Who shall I cast in my teddy bear porno?”

Let the camera roll (and shake) 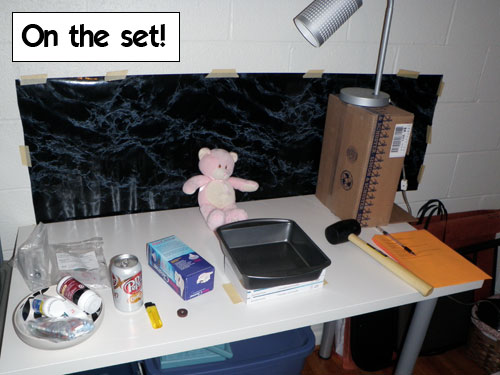 Once I had my props and a script, I set up my filming area. I taped some dark contact paper against a wall so the light-colored teddy bear would show up against the background. Then I used masking tape to bind the bear’s legs in place and to stick his butt to the table. I positioned a directional desk lamp on top of the box to give me better lighting. I set my Flip camera on top of a stack of books and taped it to the top one so it wouldn’t bounce that much when I was filming.

I went through my shot list and crossed off shots as I got them, usually doing several takes to make sure I got something usable. I ran into a few issues during filming.

Post production (aka OH MY FUCKING GOD I HATE DIGITAL VIDEO!!!)
Now I had to edit the trailer, so I downloaded the videos to my computer. Well, I tried to. The FlipShare program kept crapping out on me, and then when I finally had transferred the MP4 files to my hard drive, Vista kept freaking out whenever it tried to read a file, causing an error box to appear and the Explorer window to refresh. Then, in a moment of pure stupid-a-tude, I saved one of the video files to the desktop, which caused the computer to loop in an endless cycle of error windows that kept popping up as soon as I closed them, locking me out of my computer.

It was at this point that I said, “Fuck this shit. I’m getting a new computer.” And I did.

Yes, it was my video book trailer that finally sent me over the edge to make a $1000 purchase I had been planning on making for a few months. I was going to wait until I knew how much money I had left after taxes to replace my 3-year-old laptop, but I decided to just get the damn computer now so I could finish the trailer.

Several days later, the UPS man delivered my computer and I was able to install the 30-day trial version of Adobe Premiere to do my video editing. I couldn’t use this on the old laptop because it required a 64-bit operating system. Premiere was the program I learned to use in a college video editing class, so I was familiar enough with it to get my editing done surprisingly quickly. It only took 2-3 hours.

I needed to have copyright approval to use any music in the trailer because I’d like to get my publisher to place it on my Amazon page. I didn’t want to get sued for violating someone’s copyright. I thought about using some royalty-free music which you can find via Google, but then I remembered that my friend Jenny plays bass in the band The Odyssey Favor, so they let me use one of their songs. I then exported the video in a web-friendly format. After a few friends viewed it and promised me it didn’t suck (and I hope they didn’t lie), I uploaded it for all the world to see.

I hope you guys like it! At the very least I hope it makes you want to learn more about the book (or start a coalition to protect teddy bears). Feel free to post it on your own sites, tweet the link, scream the web address from the rooftops or what have you. I assure you that no teddy bears were permanently harmed in the making of this video.

If you live in the US or Canada
Go to the order page for Chocolate & Vicodin on their site, add the book to your cart, and then checkout. At the bottom of the checkout screen, right below the credit card info fields, there is an “Order Comments” box. Include the name you want the book signed to here as well as any other relevant info. 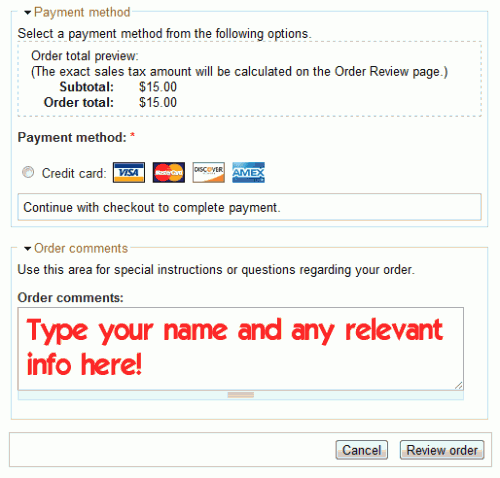 If you live outside the United States
Just send an email to info [at] flyleafbooks (dot) com with your name, address, signing information and ask how much it would cost to ship Chocolate & Vicodin to your country. (That’s the book, not actual chocolate and Vicodin, which would be illegal.) They’ll be in touch and can instruct you how to pay for the order, etc.

I am willing to customize the signing to an extent if there’s something specific you’d like me to say. So, something like, “To my biggest fan,” is cool. However, something like, “I will never forget our crazy night in Vegas with the goat and the circus clowns,” will not work. (Unless that actually happened.)

Flyleaf Books has been exclusively authorized by my publisher to start selling books on the day of my book release party, Thursday, February 17th. This applies to online orders as well, so if you order from Flyleaf it’s possible you’ll receive your book before the official release date of Tuesday, February 22. WE CANNOT GUARANTEE THAT, but you have a good chance, assuming there isn’t a postal strike or a truck fire or something. You’ll also get an email with the package’s shipping info, so you can refresh it compulsively and see how close it is to your front door.

Thanks to everyone for supporting the book! I really appreciate it, and I’m happy to cramp my hand up signing all of your books :)

Ok, that’s not true, you can probably guess what she’s giving away, and it’s not a two-headed squid.

My friend Shauna Reid, author of The Amazing Adventures of Dietgirl, has been writing on her delightful blog of the same name for 10 years now. I have to give her big props for her dedication and work ethic. Ten years is like a century on the Interwebs. Thanks for all the laughter and tears, Shauna!

And as if I couldn’t love her more, she’s giving away two advance release copies of CHOCOLATE & VICODIN to kick off her 10th Birthday Sell Out celebration. Just head over to this post on her site, leave a comment and you’ll be entered to win. Keep checking in every day, too, because Shauna’s giving away a lot of great stuff and entries are open to people outside of the US. 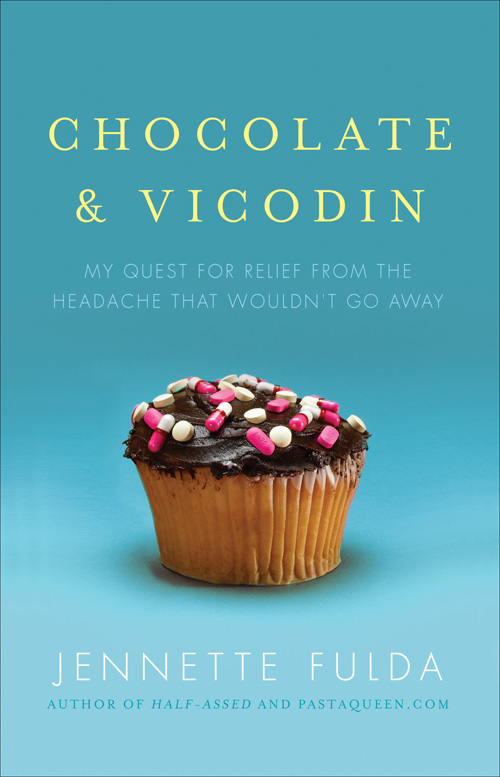 Head up, seven up! I’m going to send out my e-newsletter on Tuesday morning and it will include an exclusive chance to win an advanced release copy (ARC) of Chocolate & Vicodin. If you want to know how to enter, you’ll need to subscribe and confirm your subscription before then. The subscription box can be found on the home page of JennetteFulda.com as well as in the footer of any page there.

Back to your regularly scheduled blogging soon, I promise.