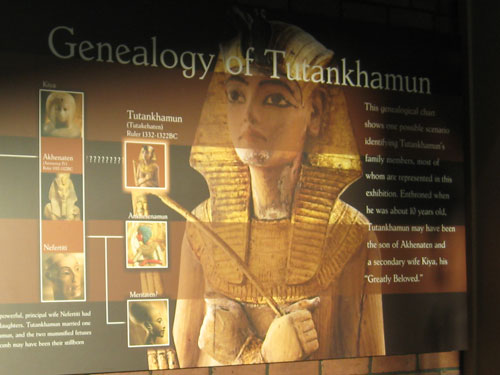 I had flashbacks to Ms. May’s world civ class as I walked through the touring King Tutankhamun exhibit at the Indianapolis Children’s Museum last week. I wasn’t overly fond of history class because it seemed like you were just learning a long list of facts. I preferred math class because once you learned a few techniques to solve problems, you just repeated them over and over to get the solutions. It seemed like less to learn, and figuring out the puzzle was fun. Ms. May’s class was different than the usual boring history calss because she told us stories about history, and stories are what we find captivating.

I was at the King Tut exhibit in Indianapolis because it was “blogger day” and I was offered a complimentary admission. Photography inside the exhibit is prohibited, so the only photos I can show you are the sign in the hallway (see above) and this shot of the door. 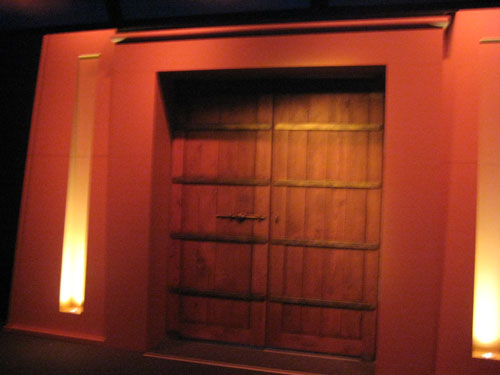 And this picture of an ancient Egyptian starfighter! 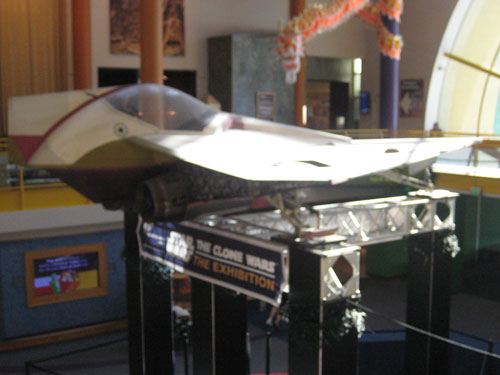 Oh, wait, that might be part of the Star Wars exhibit hanging in the lobby, where photography is permitted. I exited the lobby by walking up the stairs to the second floor and saw this sign on the wall: 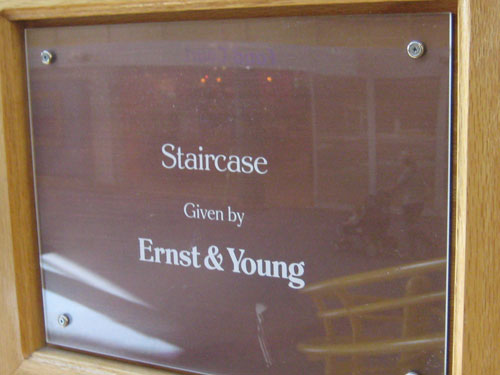 This made me wonder, what would they do if Ernst and Young hadn’t donated the staircase? Would they have looked for someone to donate a ladder?

I made it to the exhibit and was ushered into a little waiting room outside the above pictured doors. There were three LCD screens above the door playing an intro narrated by Harrison Ford. It must have been a big deal that they got Harrison Ford to narrate the intro and the audio guide (which costs an additional fee), because it was mentioned in the press release and the usher mentioned it at least twice. Usually the usher gives the speech to several people in the lobby about not touching anything and not taking photos. However, due to the timing of my arrival, I was the only one in the lobby, making it rather awkward and weird since it seemed like the usher was specifically making sure that *I* turned off my cell phone and that *I* knew there were no restrooms inside the exhibit hall because I obviously looked like a troublemaker who would pee in a sarcophagus when no one was looking. Oh, how I missed the anonymity of crowds!

Then it was into the exhibit and within 5 minutes I ran into Kat from The Burb Blog who I am doing a good job of stalking without even lurking in the shadows outside of her house (…or am I?). I met Kat at BlogHer09. Then, literally the day after I returned home, I walked into the Subway near my apartment to be greeted by, “Hey, PastaQueen!” and a wave from Kat and her husband. And now here I was following her into the King Tut exhibit at the same time within a six-hour window of opportunity. So, either I am stalking her or she is stalking me in such a clever way that she finds out where I’ll be and gets there in advance so it looks like I’m the stalker. Soon, I am sure I will bump into her at the grocery store, and I can only hope that occurs at a time when I am not buying a gallon of Ben & Jerry’s during the throes of depression. If so, I give her permission to remove it from my cart.

After chatting with Kat, who mentioned that an episode of The Real Housewives of Atlanta mentioned this exhibit, I strolled through the 12 galleries. The first few rooms featured sculptures and relics from Egypt focusing on their pharaohs. It was in these rooms that I saw the sarcophagus created for King Thutmose’s cat. 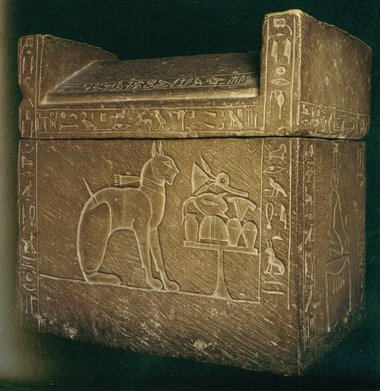 I love my kitties, but they will not be getting their own custom made sarcophagi. In fact, I am fairly certain they are immortal and will never, ever die because that would just be too terribly traumatic to bear.

I walked to the next room and saw a bust of Osiris, the god of the underworld, and immediately exclaimed, “Oh! I remember him! He was in that episode of Sesame Street where Big Bird gets locked inside the museum!” Yes, all I needed to learn about Egypt, I learned on Sesame Street. And everything I’ve ever wanted to watch is on YouTube (watch Don’t Eat the Pictures! here).

After I walked through the galleries containing King Tut’s possessions, which included gold-plated finger and toe covers, I realized that 1) Egyptians were really scared of being forced into labor in the afterlife, so much so that they were buried with lots of little statues that were supposed to become servants on the other side who’d do the work for them, and 2) Egyptians just couldn’t let go of their stuff. I realize King Tut’s tomb is not representative of the way a typical Egyptian would be interned. He was given the royal treatment, literally. However, it was amazing how much crap they stuffed in four rooms of this guy’s tomb. It made me think of the hoarder who used to live above my mother’s apartment. Her neighbor’s habit got so bad that the neighbor’s daughters had to clean out the place by throwing things out the 2nd floor window into an industrial size dumpster, which they filled TWICE. One of my life goals is to not be weighed down by my STUFF. Minimalism is good. Attachment brings suffering, and all that Buddhist Zen stuff. I certainly would not want to be buried like King Tut with a mountain of stuff, no matter how shiny it was.

If you want to see all the stuff King Tut accumulated, the exhibit will be in Indianapolis until October 25. Weekdays tickets are $25 for adults, $23 for seniors age 60 and over. (Mom, I bet you could still sneak in even though you’re technically not a senior!) Weekends (Friday-Sunday), tickets are $30 for adults and $27.50 for seniors. Audio guide is about $7 extra.