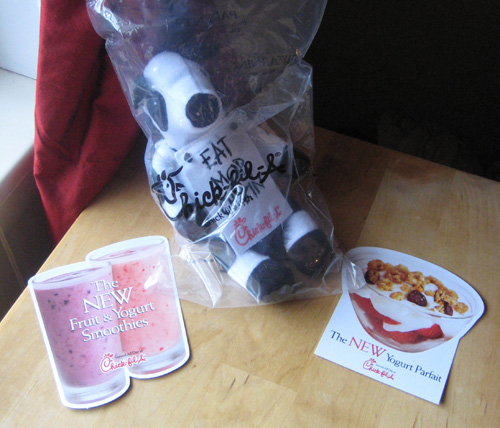 I meant to mention this earlier, but if you live in the Indianapolis area you can get a free breakfast item at Chick-fil-A every day this week. Indianapolis is one of the test markets for their new smoothies, yogurt parfaits, breakfast kid’s meal and house roast coffee. The items are also being tested in Austin, Texas and Knoxville, Tennessee. I got to try free samples of the parfait and the smoothies and they were both tasty. I have a weakness for yogurt parfaits in particular, so I hope that one gets launched nationwide.

Here is the schedule for the rest of the week:

Chick-fil-a also gave me 10 coupons for a free smoothie and a free parfait. HOWEVER, they expire May 30 and can only be used in Indianapolis, Austin or Knoxville. If you try to redeem these in New York the counter help will give you an odd look and wonder why you tried counterfeiting imaginary coupons. I also have 10 free stuffed cows, the mascots of Chick-fil-a to give away. To enter to win one of the prizes, comment on this entry by 11:59pm on Saturday, April 25 telling me what your favorite breakfast is.

Also, for reasons too complicated to explain, I accidentally posted an entry here last night that I wrote over a year ago and for some reason never posted. Which is why you should never do anything past midnight if you’ve been running around like a chicken with its head cut off for weeks. I will post the entry again eventually, after I’ve edited it a bit.