Stick out your tongues because it’s time once more for me to Lick the Produce Section. Read along as I stick things in my mouth that I’ve never stuck in there before. 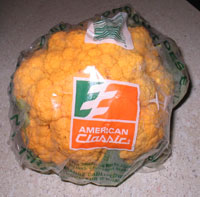 After trying purple cauliflower last month, I decided to give the orange variety a try too. According to Wikipedia it contains 25 times the level of Vitamin A as white cauliflower. Once again I sprayed it with olive oil, sprinkled it with salt and pepper, and roasted it in the oven at 425 degrees for half an hour, turning it once halfway through. And once again I took it out, ate it and decided it tasted just like regular cauliflower. I guess Vitamin A doesn’t have much flavor.

In retrospect, it would have been best if I bought a head of each color of cauliflower, cooked them all, and then compared the tastes side by side to catch any small variances in flavor. However, I would have been up to my ears with heads of cauliflower. I try to eat my veggies, but there is only so much beta-carotene a girl can take. The cashier at the grocery store probably would have given me an odd look too, forcing me to spin some story about making a vegetable mosaic for art class. It would be easier than explaining what a blog is.

Halloween is a little over a month away though, so this orange food could be useful in creating holiday themed food. It’s healthier than candy corn, for sure.

After trying kiwifruit last month, I decided to give the golden variety a try too. (This post is in danger of becoming a remake of my last Lick the Produce Section post, like the Americanized version of a British TV show. Blimey, should I insert some foreign slang, mate?) Eve and Jill sang the praises of the golden kiwifruit in the comments and I liked that it was significantly less hairy than its cousin. I took a bite and – Oh my God – soooo good. The golden kiwi is softer and squooshier inside than the regular kiwi. It has a texture more like an orange. It’s also sweeter and less tart than the green kiwi. I will definitely be getting these again. I also like how the name “golden kiwi” reminds me of a Gold or Platinum credit card. It’s not just a kiwi, it’s a Golden kiwi. I feel like my credit limit increased just by eating it. 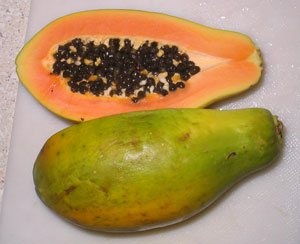 When I hear the word “papaya” I start singing the Kate Bush song “Eat the Music“:

Rip them to pieces

If I had access to guavas, sultanas, and pomegranates, I could do an entire Kate Bush themed Lick the Produce Section post! I don’t though, so we’ll just have to settle for the papaya part.

After I bit into the waxy, bitter skin of a mango, I now properly research how to eat new fruits. I was surprised to discover that the papaya had seeds in the center and more closely resembled a cantaloupe than a huge pear, which is what it looks like on the outside. Unlike Kate Bush’s suggestion, I did not rip it to pieces with sticky fingers, but used my big, shiny knife to split it in half. The papaya itself was sweet and tasty and I’d definitely eat it again, but I think it’s a bit pricier than the melons around here. The seeds were bitter and can evidently used as a garnish, but I just used them to garnish my Hefty bag in the trash closet. According to Wikipedia the seeds are also “anti-inflammatory and analgesic, and they are used to treat stomachache and fungal infections.” Well, how fancy! If I ever get athlete’s foot I’ll just stock up on my tropical fruit

Time keeps ticking, I keep licking the produce section, and man are my taste buds sore. It’s time once again for me to report on the new fruits and vegetables I have tried to eat with varying levels of success. 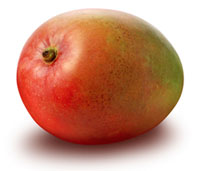 When I think of mangoes, I think of the Gauguin painting Woman with mango. Typing that title makes it sound like another recipe from the cannibal’s cookbook. I opted to eat the mango raw. However, if I had taken a closer look at Gauguin’s painting I would have realized I should have waited until it turned red to do so. Instead, I got out my big knife and tried hacking into a green mango. I got about an inch into it and felt like I’d gotten my workout for the day. I checked the wikipedia article on mangoes and realized my mistake, but by that time it was too late. If I left my mutilated mango to ripen on the counter it would just have gotten moldy. I finished cutting out a wedge anyway, bit into it and it was about as bad as you’d think unripened fruit would be. I threw it out for the trash flies to feast on and bought another mango a couple weeks later.

This time I waited for it to turn red and soft and bit right into it. That was mistake number two. If I had finished reading that wikipedia article I would have discovered that you’re not supposed to eat the skin. It’s like biting right into an orange or chewing on watermelon rind. In fact, there is a fancy schmancy way you are supposed to cut a mango to get out all the good, fleshy orange stuff. After all those mishaps, I finally ate the damn mango already. It was tart, somewhat lemony or limey, but sweeter. I’d certainly eat one again, now that I now how to do it properly.

, a book about fruits and veggies that some kind reader suggested (thank you kind reader!), which also has the fugliest cover of any book I have ever seen ever in all my life, and it said mangoes are the “number-one consumed fruit in the world.” They just don’t show up in the US that much due to various boring importation reasons I won’t get into. I had no idea they were so popular, especially considering how hard it was for me to eat one. Go figure. 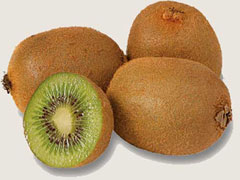 I have had kiwi fruit before, but I had never bought one in my adult life because it was brown and fuzzy. Kiwi skin reminds me of shag carpeting and I’ve never had a desire to chomp on the carpet. Avoiding kiwi fruits was stupid though because, yum, they are delicious! After my experience with the mango I looked up information on the kiwi to be sure it was okay to just bite into it like an apple. Usually kiwi is served sliced up, but that would mean I’d have to clean my knife afterwards and I am always looking for ways to cut down on dirty dishes. Kiwi is now one of my favorite fruits and I’m definitely going to put it into high rotation in my lunch bag, weird fuzzy skin be damned. 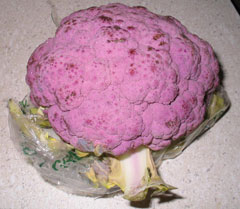 When I saw the purple cauliflower and orange cauliflower heads in the produce section, I thought they had set it in water with purple food coloring. In grade school we did the same thing with white carnations to color their petals with streaks of purple. I didn’t know why anyone would turn cauliflower purple or orange, but the oddness appealed to me and I needed a new vegetable to try, so I grabbed the purple head because I thought purple was a slightly weirder color than orange.

When I researched my purchase, I discovered that the coloring was natural. “The purple color is caused by the presence of the antioxidant group anthocyanin, which can also be found in red cabbage and red wine.” I roasted this in the oven with olive oil, salt and pepper like I usually cook cauliflower and it tasted just like normal cauliflower. Maybe true taste connoisseurs would catch slight variances in flavor, but if you’d blindfolded me I doubt I would have been able to tell what color the cauliflower was. While the purple coloring was fun, I think I’ll stick to the white stuff for now. If I stick it in a pool of food coloring I bet I can turn it any color I want to.