2008 is a truly horrible year for the makers of Peeps and Cadbury Crème eggs. Easter has come earlier than it has since 1913 or it will again until 2160 (according to Snopes). Easter falls on the first Sunday after the first full moon after the vernal equinox, a piece of trivia I learned just so I can impress people with an obscure piece of trivia. These events all occurred one day after another this year, hence we’ve got an early Easter. I suppose this is good for my weight since Easter candy is by far my favorite seasonal candy. But I did freak out a little last weekend when I looked at my calendar and realized I had less than a week after St. Patrick’s Day to partake in my annual indulgence of one box of Peeps and one caddy of Crème eggs. So I grabbed some on my weekly trip to the grocery and they were indeed good.

What I didn’t know is that I stuffed less egg in my face than I did two years ago. The Cadbury Crème egg has shrunk! See exhibit A (Image stolen from this blog): 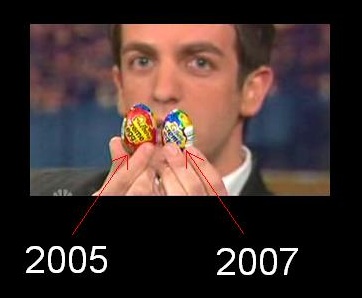 It’s down 5g. I don’t know if they take that out of the chocolate or the gooey fondant center or both. Even more shocking, this happened last year! And I didn’t even notice! Why didn’t anyone mention this to me? Y’all really let me down on this one.

At first, Cadbury denied that the egg had gotten smaller, saying instead that, “It hasn’t – you’ve just grown up!” They’ve now updated their FAQ page to explain that the egg is the same size it’s always been in Europe and Canada, but Americans are at the mercy of Cadbury’s business partner, the Hershey company, who decided to shrink it.

Normally, I am a fan of smaller portion sizes, however that’s clearly not what the shrinking egg conspiracy is about. There were no ads promoting the smaller eggs as lower calorie or easier to stuff entirely in your mouth. This was done on the sly so they could keep charging us the same price for less product. This is evidently a common practice. I learned about the smaller egg size from a story on ABC News that revealed that the same thing is happening with everything from toilet paper to yogurt. I noticed a couple years ago that my yogurt cups shrunk from 8oz to 6oz while staying the same price. Who knows what else they’ve switched on me?

I’ve funny that fast food restaurants have increased portion sizes on cheap food products like 64oz tubs of soda pop, yet other products are silently shrinking on the grocery store shelves. Sadder yet, there’s not really anything I can do about it, besides importing Cadbury eggs from Canada.

So,um, happy Easter everybody! If you live in Canada or Britain, stuff one of those huge crème eggs in your mouth for me, will ya’?