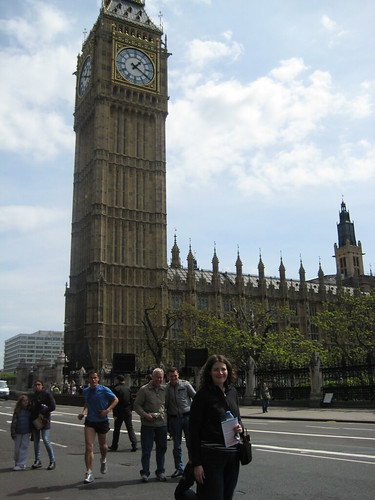 I thought only bums fell asleep on public buses, but evidently jetlagged Americans do too. At 11:00am London time, 6:00am PastaQueen time, and after 22 hours of consciousness, my body finally screamed, “SLEEP!” as loudly as the bus driver was honking at the gridlock on Trafalgar Square. I had moved to the bottom of the hop-on-hop-off bus tour because the top was too cold and windy, but the combination of warmth and stillness made me lean against the window over my bag and enter a state of not quite sleeping, but not quite awake.

Realizing it would be very bad to fall asleep on a bus in a foreign country, I jumped off at the next stop, Buckingham Palace, and discovered the proper treatment for jetlag is lots and lots and lots of walking. I’d started the day by buying my bus ticket and hopping on outside St. Paul’s Cathedral. We drove across London Bridge and Tower Bridge and past lots of landmarks, but after hitting the snag at Trafalgar Square I got off and never got back on. This was either because the guide didn’t impress me much or my brain was too sleep-deprived to follow what he was saying. At least no one had BO, which cannot be said of my train ride into the city which was otherwise quite lovely. British houses have such cute chimneys! Lots and lots of chimneys. On my ride in from the airport I was hit with international wonder. The people on this train have British accents! The cars are driving on the wrong side of the street! They have funny license plates! It’s just like I’ve seen on TV and the movies! Only I’m here! For real!

After hopping off the tour bus, I walked from Buckingham Palace through St. James Park and then past Big Ben and Sri Lankan protesters. All of that was in the guidebook except for the protesters, who were sitting in the middle of the street, blocking traffic. I suspect they might have had something to do with the gridlock at Trafalgar Square. The best thing about walking in London is not the random protrester, but the nifty crosswalk buttons. When you hit the button to trigger the walk sign, it lights up and says “Wait” so you know it actually worked! In the states there is just a button which you compulsively press over and over again like an elevator button, never sure if your message is getting through. 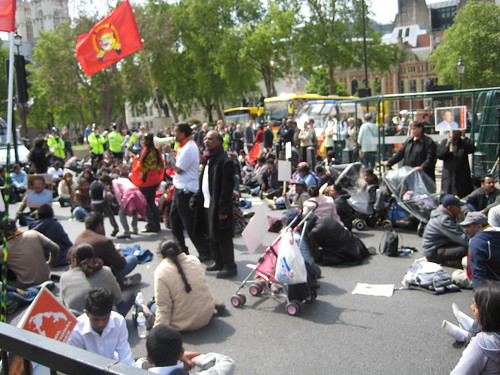 I walked down Westminster Pier and got on a City Cruises boat that was included in my bus ticket. The boat guide was funny and informative, much better than the bus guide, which made me grateful enough to tip him a pound on the way off the boat. Of course, the bad thing about the exchange rate is that it makes it seem like I’m spending less money than I am. When I paid 27.50 pounds for my train pass, I thought, “Oh, 27.5 units of currency is not that much,” when really it’s about 40 dollars of my native currency, which is harder for my money-conscious mind to take. 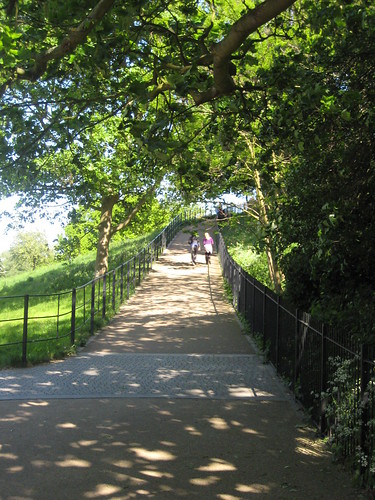 Yes, I actually climbed that Big Fucking Hill. Why they made it a ramp, I don’t know. It was steep enough to justify stairs, felt like I was climbing stairs and would have been a death ramp for anyone in a wheelchair who would have one hell of a ride before they faceplanted into a lovely green British lawn. As if to taunt me, they added 4 stairs at the end as if to say, “Yes, we could have made these stairs, but we chose not to. Ha!” However, the view was amazing. 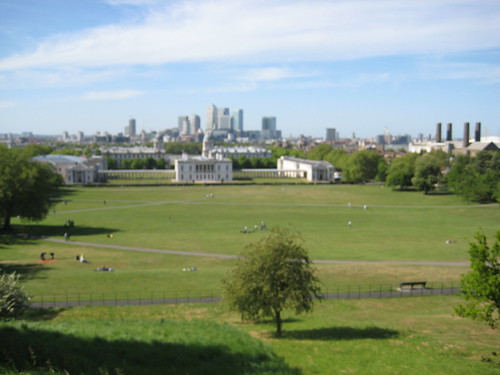 I also straddled the prime meridian, placing myself in the eastern and western hemispheres at the same time. I love getting the touristy shots. It’s more fun than PhotoShop. 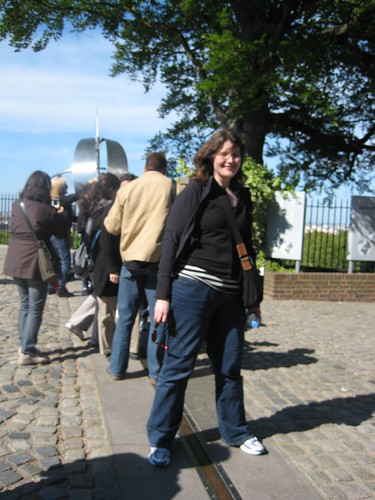 Then I decided I was sick of Greenwich and sick of my purse making my back ache and I headed back for the boat which sailed back to London, again with my head down in a state of half-consciousness. I took the tube back to my hostel, which is rather nice even if it is within earshot of ringing church bells every hour on the hour. The girls coming back in at 4:30am speaking French bothered me more. I turned in at 10pm after doing a bit of reading about the places I planned to visit on Tuesday, finally escaping into sweet, sweet sleep. I’d never crossed this many time zones at once before, and in college I never, ever pulled an all-nighter. I always reached a point where I figured I was doing more harm than good and would go to asleep already. This might have been the longest period of continuous consciousness I have ever experienced, and I’m not crazy about doing it again.

I wish I were able to upload all my photos to Flickr as I’d planned, but free wi-fi is hard to find and the free connections I have found are abysmally slow. I bought an hour of time at my hostel, which I’m using to quickly check email and post blogs, but I don’t have time to upload 500 megabytes of photos. My hotel in Paris is supposed to have free wi-fi, so perhaps I can catch up then. Until then, I leave you with this, a picture of my fish and chips! 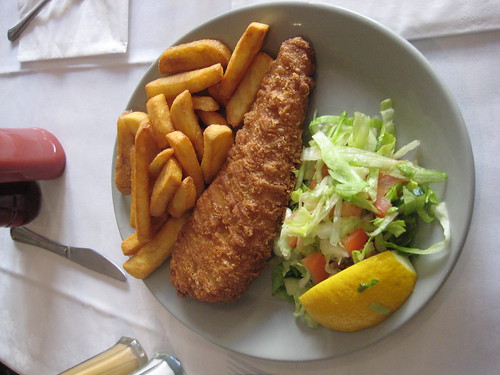