I hung something in my bedroom above the treadmill last month, as Krupke has obviously noticed. 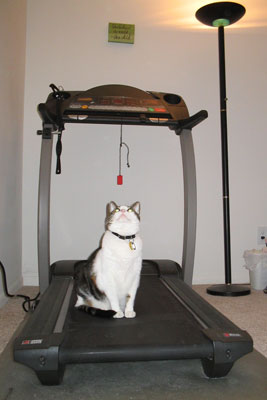 Right after I moved into my apartment, I went on a decorating bonanza. I signed up for craft store mailing lists and clipped coupons every week to buy picture frames and fabrics at 40% off to hang on my walls. I pretty-fied two and a half walls of my bedroom before I got bored. (And before I got my credit card bill. All that glitter paint and fabric dye adds up!) So, one and a half walls have been as white as the halls of a mental ward for the past year. I’d considered hanging a picture in front of my treadmill of a road disappearing into the horizon or of the M.C. Escher sketch of monks walking an endless path on top of a tower. But after the Hallmark conference, I was glad I saved my money and hung up this piece of swag instead: 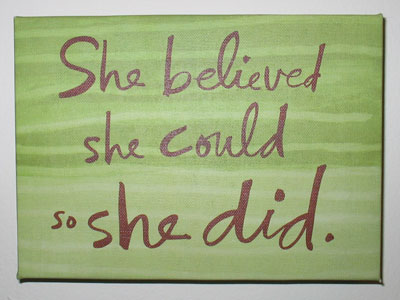 I would never have bought this for myself. If anyone had given this to me as a present I would have said, “Oh, that’s nice. Thanks!” and rolled my eyes when they weren’t looking. I prefer the snarky demotivator posters to the motivator posters. I can’t seem to read an inspirational statement without wanting to mock it, no matter how heartfelt and true it might be. Items like this can seem like the adult equivalent of carrying a folder plastered with unicorns and rainbows. (Which I did in 2nd grade, but that’s completely irrelevant.)

However, the little canvas sign was free. And it perfectly matched the green and purple color scheme of my bedroom. And I did need something to stare at as I’m stuck inside running this winter. So I grabbed a hammer and nail and hung it up there right at eye level.

And I’ve been staring at it. A lot. I see it as I’m running intervals or going up hills or just jogging along at a steady pace. Once you’re literate, you can’t look at a piece of writing without automatically reading it in your head. You can’t look at letters and words without interpreting their meaning in your brain. “She believed she could so she did.” It’s been helpful when I’ve wanted to skim a quarter mile off my distance. It’s been good to read as I’ve been thinking of other aspects of my life that have nothing to do with my fastest mile time. It’s been putting ideas in my head, making me think I can do anything and be anything. It’s been, dare I admit it, inspirational.

I’m not stupid. I know believing you can do something doesn’t automatically mean you can. There are a dozen people out there right now who all believe they can be president, but only one of them actually will be. But if you believe you can do something, you substantially increase your odds that you can actually can. If you’re too stupid to know something’s impossible, you might just be able to pull it off. When losing weight, people focus a lot on meal planning and exercise routines. Those things are important, but it’s the belief in yourself that will get you through. No quitting, no giving up. Believe it and then make it happen.

And while I’m still a somewhat cynical person who has urges to mock sentimental wall-hangings, I’m much more optimistic these days. Doing something impossible, like losing half your weight, does that. It makes all those other impossible things seem much more likely. Maybe I will marry Johnny Depp. Except, he smokes, which is gross, so maybe I won’t. But I believe I can keep the weight off and I believe I can run a half-marathon and I believe in myself. And that’s all I need. Well, that, a good pair of running shoes. And a sentimental wall hanging. But no more unicorns!