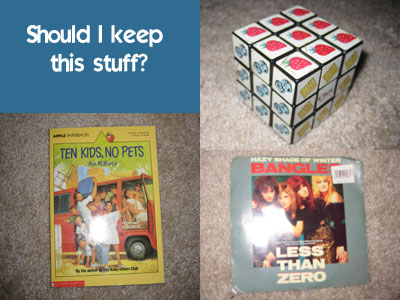 Do I need to keep the Corn Chex branded Rubik’s Cube with blueberries and strawberries on the side? What about The Bangles EP for “Hazy Shade of Winter?” Is it worth storing all these young adult novels in the closet when I haven’t read them since I was a young adult?

I’ve been asking myself these questions the past few months as I clean out my closets and bookshelves. I hate having too much stuff. Stuff sits around, taking up room. Stuff is heavy to lift and carry down stairs to a moving truck. Stuff consists of very little I need.

I enjoy getting rid of my stuff. When I went through my file cabinets last year, I was tempted to keep all the notes I’d taken in college complete with doodles. The more doodles, the more boring the class. It reminded me of that time in my life, but I don’t need those notes anymore. If I needed the information in them, I would turn to Google before my file folders. I hadn’t even looked at these scribbles since the year I scribbled them. So I tossed out two garbage bags full of graphite marks on paper and I don’t miss them, though I was afraid I would when I shut the door to the garbage bin. That’s the amazing thing about throwing out stuff, I never need it as much as I thought I did.

Sometimes getting rid of my stuff means accepting who I am, and not who I tried to be. It’s okay to get rid of that book about how to paint furniture because I am never, ever going to paint my nightstand. If I was, I would have done it 5 years ago when I bought the book. And it’s okay to throw out the “Oliver and Company” toys we got at McDonalds. I am not throwing out the memory, I’m just throwing out some plastic.

I can’t let go of all my stuff though. My She-Ra action figures will follow me wherever I go, though I never play with them. The papers from my childhood schoolwork seem more precious than my freshman biology notes, so they stay in the closet too, causing the wooden shelf to bow. I tried to throw out the boxes full of origami I folded in high school, but they seemed too beautiful to trash.

I have a one-bedroom apartment, so I can only store so much stuff here. As I buy new stuff, like waffle irons and Hello Kitty toasters, I start to run out of space. So, every few months I have to cull my stuff again. Things I thought I needed to keep a year ago start to seem disposable. If I’m ambivalent about trashing something, I take a picture of it on my digital camera, converting my memory from atoms to bits.

I’m picky about the new stuff I bring in. I’ve started to shy away from grabbing free hats and t-shirts I know I will never wear. I don’t need any more free bags to stuff in my closet. I traveled all around the country last year, but I only bought one or two souvenirs. There were many sparkly and colorful items I could have purchased, but before I buy I ask myself, “Do I really need this? Or is this just something I will be listing on ebay in five years?” I prefer to take pictures instead.

When I visit friends with china cases and dozens of full bookcases, I think to myself, “Oh my God, I could not handle owning that much stuff.” I remember how my mother had to purge our house when she moved to an apartment. She sold the king-size bed to a women we later figured out was a stripper. She gave the extra fridge away for free to anyone who would cart it away. We sold the washer and dryer to my cousin who later sold it again when she moved for a profit. And you know what? We do not miss any of that stuff. It was nice to have it when it served its purpose, but my mother is just as happy without all that clutter filling up spaces. It makes me anxious thinking about owning that much stuff. I don’t want to be attached to stuff. I want to own my stuff. I don’t want my stuff to own me.

It’s easier to get rid of things because I know the Internet is out there and the libraries are well stocked. If I really need something, I can probably find it. I will only regret my decision to not have much stuff if a revolution comes and the Internet collapses. But in that case, I will probably have more to worry about than where my copy of “10 Kids, No Pets” ended up.

I hate that my suitcase is so full when I travel. If I could live with only a laptop and a bag of clothes, I think I might. I still think I have too much stuff, even though it all fits in a 750 square foot apartment. So no, I do not need the Corn Chex Rubik’s Cube. I do not need the Bangles record. And I will not keep the young adult novels. But if you head to the Goodwill or the used bookstore at the right time, you might end up owning some of my stuff someday.