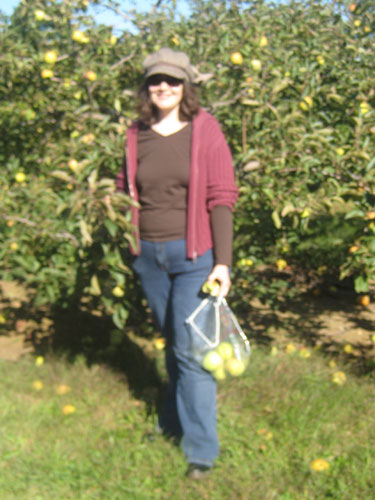 Yesterday, I put on my apple pickin’ hat, my apple pickin’ boots and my apple pickin’ shades and went to pick some pumpkins. Okay, I’m just screwing with you, I actually picked some apples. To be precise, PastaQueen picked a peck of apples at the Anderson Orchards near Mooresville. (I also want to note that I still have both of my legs, although the photo above makes it look like I only have one. I swear I have not become so desperate to lose weight that I have cut off a limb.) 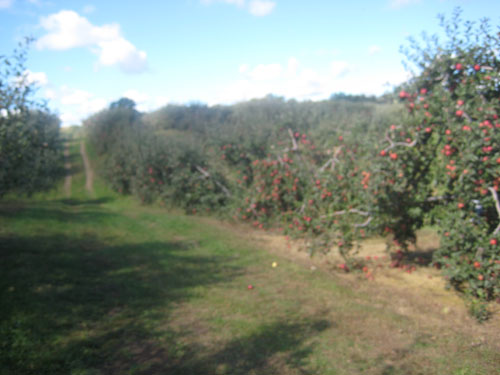 Anderson Orchards is located southwest of Indianapolis. It’s tucked away a few miles off of I-70 and accessible via twisty country roads. My friend Jenny gathered a group of her friends and we traveled to the orchards on a bright and cool sunny day, perfect weather for picking. We parked in a gravel parking lot in front of the orchard and walked to the gravel road that runs through the middle of the orchard. 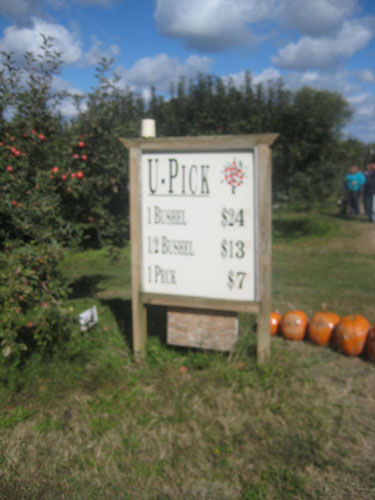 A man there was handing out plastic bags that were labeled “1 peck” and “1/2 bushel.” He gave us a good piece of advice, which was, “The bags are heavier coming back.” This is why they allowed people to drive their cars back through the orchard, but our group was content to walk. He told us it was ok to sample an apple off of a tree, and also told us, “No apple fights!” I am assuming someone at some time had an apple fight, and they probably made applesauce of someone’s face. 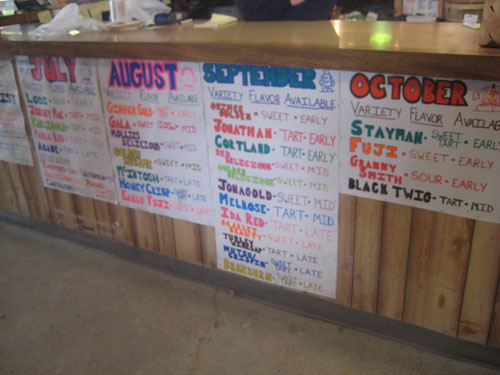 Each row of trees had a sign in front of it labeling the type of apples growing there. I hadn’t heard of half these breeds, but they were all fairly tasty. I liked the Scarlet Beauty apples, or as we called them the “Scarlet Booty” apples. As a tall person, I clearly had an apple picking advantage because I was able to pluck fruit off the higher limbs that had been neglected by shorter people.

When we had collected our bounty, we walked back down the gravel road and had to pass through the apple border control. Cars were made to open their trunks to ensure they weren’t thieving. I paid $7.00 for my peck of apples. I weighed them when I got home and learned I’d gathered 10 pounds of apples, meaning they cost me $0.70 a pound. This is a pretty good price, even after you factor in the gas money I spent getting there. Of course, I now have 10 pounds of apples sitting my kitchen, so I am looking for creative recipes to use before they spoil.

Before we left the orchard, we went into the store where they were selling picked apples, grapes, tomatoes, pumpkins, pumpkin rolls (mmmm, pumpkin rolls), candy corn, fudge (mmmm, fudge), apple butter, popcorn, candy apples and basically anything you can make with apples. I would like credit for not buying any of these delicious concoctions, and settling only for some cider and an apple turnover for lunch. For my dietary diligence, I was rewarded by a swarm of bees and wasps trying to eat my turnover. I was literally batting them away with my fork, accidentally sending them into Lisa’s face who was sitting across from me. The pests had no interest in the apple cobbler or apple slushies or biscuits and apple butter my friends had ordered. They only wanted my turnover, which was basically a piece of apple pie enclosed in a crust pocket and drizzled with icing.

When I returned home, I looked up a peck on Wikipedia, since the only thing I knew about it was that Peter Piper had picked one back in the day. Wikipedia said a peck is equivalent to two gallons. There are four pecks in a bushel, and all this odd naming is a reminder of why most countries have switched to the metric system.

For your reference, this is what a peck of apples looks like: 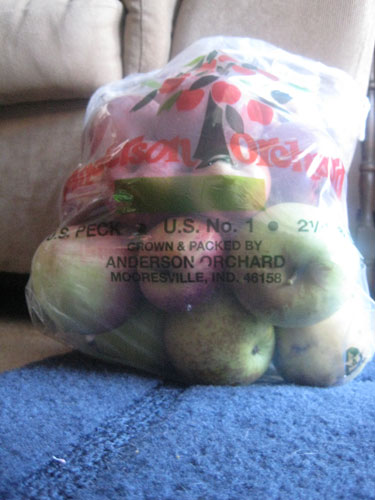 Mmmm, I did some experimental cooking in the kitchen yesterday and came up with a fairly healthy version of cinnamon apples. My brother bought us Boston Market when we visited his new apartment last week and it killed me that I couldn’t have the cinnamon apples as they are truly divine. Actually, the only sides I could get were the steamed veggies and green beans. <sigh> It’ll be nice when I only have to maintain my weight and not lose it because I’ll be able to have potatoes and sugar again, but that is still a year away.

So, as I was saying, there is a recipe in the South Beach Cookbook for an almond apple souffle. I just did that part for the apples and replaced the almond extract with cinnamon sprinkles. It was soooo good. I even dolloped some whip cream on top. My one concern is that the apples probably have less fiber because they are peeled. Next time I might try making them with peel in tact and see what happens. Recipe follows:

Core and peel 3 medium sized baking apples (or 2 large Red Delicious as I did). Combine with 1/4 cup water in a 2qt sauce pan. Bring to boil, then reduce heat to low and simmer for 10 minutes, stirring occasionally. Remove from heat and mix in 3 tbsp of Splenda (or sugar substitute of your choice). Sprinkle on cinnamon and enjoy!