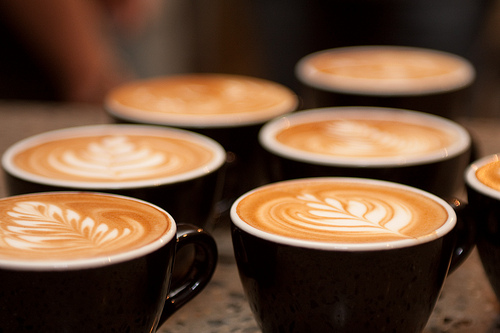 Actually, I’ve become a coffee shop john if we’re going to make the prostitution analogy correctly. I’m the one paying, after all. I’ve been freelancing full-time for 21 months now. (And I’m still not broke! I know, I’m as shocked as you are.) As nice as it is to sleep late, take vacation days without need of approval, and to crash on the couch in the afternoon if my headache has my brain in a headlock, it can get lonely if you let it. Hypothetically, if I had enough groceries I could stay in my apartment for days, if not weeks, at a time. That’s great if there is a nuclear incident in my vicinity. All I’d have to do is duct tape the windows closed to protect myself from stray neutrons. But it can also get rather claustrophobic and boring no matter how many movies I can watch on Netflix streaming.

Lately I’ve been going to coffee shops to work. A lot. Like, way more than I ever did in the first 16-18 months of working for myself. I’m going so often that my backpack smells like coffee grinds. There’s something about getting out of the house and being among people that helps me focus on work and stops me from crocheting cat sweaters in my pajamas. And this town—oh, man—this town has a lot of coffee shops. They’ve got at least three custom roasters within a 10-mile radius, maybe more. It’s much easier to find a place to loiter all day in Chapel Hill than it ever was in Indianapolis.

As a result, I’ve become a wellspring of highly specialized coffee shop knowledge. I know who serves the cheapest cup of decaf and who makes the prettiest leaf designs in a latte. I know who charges for Internet access and how to tether my phone to my computer to circumvent that and make the best of my limitless data plan. I know the password for the network at one place and I know that the wine shop across the street has faster wi-fi that’s free. I know which place doesn’t have wi-fi. (So, so freakish.) I know to keep a pack of gum in my purse to get rid of that coffee aftertaste on my tongue. I know who closes at 6:30pm and who closes at 9:30pm. I know not to go to one place between 1:00pm-4:00pm on weekdays because all the seats near electric sockets will be full. I know not to go to another place, ever, because all the hippies hog the seats all day. I know which place is the quietest and which one is more of a meeting place. I know which place serves sandwiches and that they shut down the kitchen at 2:00pm. I know who serves coffee in paper cups instead of a much nicer mug when you order it “for here.” I hate that the place with the coconut flavored decaf is so far away. I know which place has tables at the best ergonomic height and which one’s tables cause me to slouch and aggravate my headache after two hours. I know which tables are wobbly and how many napkins to stick under one leg to steady them. I know that one place gets awful afternoon sunlight glare, so I should only go there on rainy days. I know to bring a jacket to the place that has the air conditioning ramped up to the icicle setting.

So, yeah. I know WAY too much about the coffee shops in this town.

Hanging out at these places has also let me overhear strange conversations and see some…interesting people. Last week I went to read at the place with the cushiest chairs, but someone else had gotten there first. To nap. And snore. LOUDLY. I couldn’t even drown it out with my MP3 player and headphones (which are part of my Essential Coffee Shop Accessories Kit®, along with a computer mouse and a small screwdriver set). The very next day at a totally different coffee shop, a totally different guy was sleeping at the table next to me, snoring, though not as loudly as the first guy.

Obviously the baristas have switched everything out with decaf.

It’s also strange how many serious conversations you can overhear at these places. A father and daughter were sitting at table next to me talking about her sports injury and had a rather tense conversation about his concerns for her health and athletic future. A woman who I think was a professor had a conversation with someone asking if they’d speak on her behalf against some sort of formal complaint. Yesterday someone used the word “anonymize” in conversation which I’m not sure is a real word or not. Different dictionaries seem to have different opinions on this.

And of course, there’s always the customer who bitches about the price of coffee.

I’ve left places because the person next to me had the worst case of body odor ever. I’ve left because someone kept sneezing and hacking, and ever since I saw that episode of Mythbusters I know that the germs go EVERYWHERE. I’ve left because two boys were dicking around on the Internet for HOURS and giggling every minute, putting any school girl to shame.

There are also the people with weird hats, cool shoes, and the occasional person with very short arms, probably due to a genetic issue, who I tried very hard not to stare at but felt guilty for glancing at twice.

Anyway, it’s interesting being part of this coffee shop culture. It’s fluid and ever changing, like a river made of people and their quirks. Perhaps some of the baristas or other regulars have noticed me as that girl who’s always working on her laptop. I hope they don’t mind that I’m seeing other coffee shops. I thought about putting a sticker on my laptop from one place, but thought that might seem rude to the other coffee shops, like coming home with lipstick on my collar.

I should probably get back to work now and maybe get a refill (only $0.87) because, of course, I’m writing this from a coffee shop.

Earlier: The IGIGI contest is over