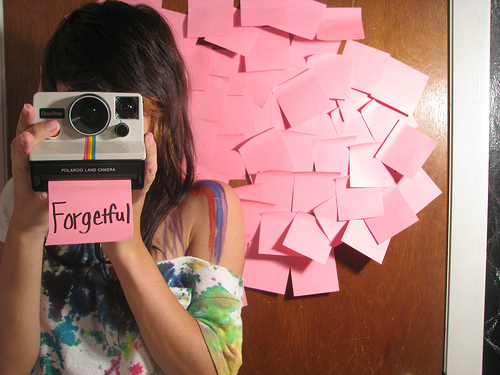 Lately I find myself opening up my web browser and having to wait a few seconds before I remember why I opened the browser in the first place. Sort of like my brain is a computer that has frozen for a few seconds as it distributes enough resources to properly load my Rememberio 1.0 program. Usually the thought comes to me, like “Oh right, I wanted to look up what movies this actor has been in” or “I need to look up the location of the shoe store on Google Maps.” But still, there is this slight pause that is sort of annoying and slightly perturbing.

I learned in my college psychology class that we have two forms of short term memory. There is the super short term memory that lasts for about 7-10 seconds. Anything you think of in those seconds can then be copied over to your regular short term memory, where it will stay for a longer amount of time and may eventually be copied over to long term memory. (This is the part of the entry where someone with a science background will nitpick my retelling of these concepts and tell me how I’ve screwed up my summary of something I learned in 1999, but whatever. Please be nice about it if you do. I ain’t a doctor, I just play one on this blog.) Sometimes you don’t copy over something in the super short memory and that’s when you get that horribly annoying feeling that you know you’ve forgotten something but you have no idea what you’ve forgotten. So then you try to backtrack through your thoughts trying to recreate the mental path you took to think of whatever you forgot.

I’ve come up with three theories on why my memory is experiencing mental hiccups:

1) It is the inevitable result of a fast-paced, social media world where my attention is constantly being pulled a zillion different ways at once between Facebook, Twitter, email, my web browser, my phone, constant background stressors like finances, health insurance claims, gas prices and oh, right, my actual real world environment where my neighbors’ kids run screeching like dying chimpanzees downstairs.

2) It is the sign of the cognitive impairment that comes with chronic pain.

3) It is a result of the aging process by which I will become old, forgetful and senile.

I’m not sure which one of these things is making me slightly forgetful, or if it’s a combination of some of them, or if it’s due to something else entirely.

Oh, and literally hours after I had written this post, as if the universe were reading my forgetful lil’ mind, I read an article that says fat people have worse memories than skinny people. So maybe my weight gain since my headache began is to blame. Let’s add this then:

Anyway, I’m not sure what there is to be done about it other than to buy lots of post-it notes and start doing crossword puzzles to exercise my mind. I’m not a big crossword fan, so I’ll probably just keep forgetting things instead. Wait, what was I talking about?

Later: What name can be spelled only one way?

Earlier: By the way, I’m alive