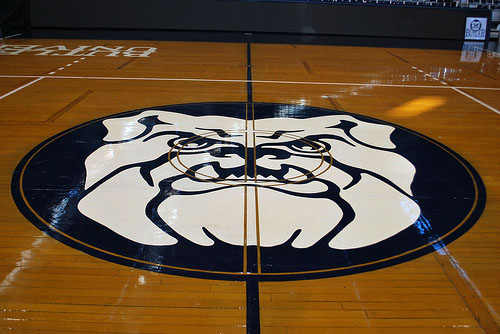 I had avoided watching the Butler basketball game in the second round of the NCAA tournament because I’ve decided I can’t stand to watch sports games when I actually care about the teams. It makes me anxious. (I can’t watch The Amazing Race either because I get worried that the good people will miss their flights and the bad people will win because this is not scripted and evil sometimes wins.) As I confessed last year, I love the Butler Bulldogs, and I still find comfort in the idea that there is a parallel universe somewhere in which Gordon Hayward’s buzzer beater shot from half-court actually landed in the basket, they won the tournament, and someone is producing a movie about it. And I don’t even care about basketball!

So, there I was avoiding the game, which was easy because it was on cable and I do not have cable. My dad was visiting, so we were watching a game between BYU and Gonzaga, which sounds more like a cheese than a university. Alas, CBS had an infographic at the top of the screen that updated with the latest scores and the time left in the other games. So, of course, the Butler game comes up with Butler down a point with one whole minute left in the game. And I was like, “Damn it, Butler! Why must you always do this to me? Why can’t you just demolish your opponent instead of eliminating my need for nail clippers?”

My dad and I watched the timer run down to 8 seconds (actually, I watched through my nail-bitten fingers), and then it held at 8 seconds for awhile, which was driving me crazy because I didn’t care about the cheese college’s game. So, what does a girl without cable do? She gets her Twitter on! People are always clogging up my Twitter stream with stupid talk about basketball, and now I was finally grateful for it! I pulled out my laptop and searched Twitter for the #butler hashtag. Oh, marvel at my ingenuity, me the 21st century girl (without cable).

This was at once both incredibly informative and totally confusing. For instance, in the tweet stream I would see something like this:

So, something important had obviously just happened, but who was the Butler fan and who was the Pittsburgh fan? Why couldn’t their Twitter names be @ButlerRocks and @Pitts4Evah or something?

Then the clock restarted on the TV and then stopped again at 2 seconds, which is when the Twitterati let me know someone had done something stupid, though I could not determine what. I kept hitting refresh, refresh, refresh, trying to sort out facts from the chatter, and finally figured out that Butler had gotten the upper hand by one point and was good to win the game when—d’oh!—somebody fouled Pittsburgh, which meant they’d get two free throws and might win the game.

This was when I remembered why I DON’T WATCH SPORTS GAMES THAT I CARE ABOUT. I evidently needed to expand that rule to include not searching Twitter for hashtags about sports games I care about.

So, there was more rapid refreshing and I announced to my dad, who was watching over my shoulder, that there would be overtime. Yay, overtime! I hate it at work, but in this basketball game it was a Godsend. Go Bulldogs, you’re the—Oh, wait, what’s this? We’re not in overtime? There was a foul. Huh, what? Do they mean the earlier foul? Someone else couldn’t have possibly fouled with less than 2 seconds left. Did we foul again? Were we doubly stupid? When did this become “we,” anyway? Oh, right, many, many moons ago when I worked a contract job at Butler for two months. Here’s the picture of the cup I stole from IT to prove it: 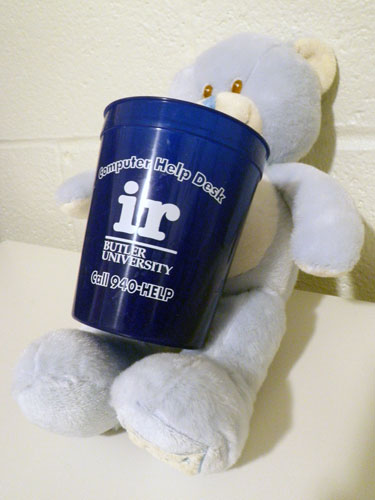 Finally after several tweets about overtime, fouls, and the bowel movements of the tweeters in question, I finally figured out that Pittsburgh had fouled Butler (God only knows how), so now Butler had two free throws to break the tie and win the game they really should have won several seconds ago.

I kept clicking the refresh button and again there was the “YESSSSSSSS!!!!” and the “NOOOOOOO!!!!” and I was like, “Yes! No! Yes! No! What the hell happened?!?!?” Finally, FINALLY, enough tweets came through for me to learn that my boys had come through and Butler had finally won, snatching victory from the jaws of defeat that they had just snatched from the jaws of victory, like some sort of metaphorical turducken, all stuffed within each other.

It was a rather odd way to follow a basketball game, as thrilling as it was confusing. I had to wait 20-30 minutes before CBS finally showed the highlights, so I was glad I hadn’t been stuck in a clueless vacuum with only a cold infographic to keep me company. Later I poked around the NCAA site and learned you can watch live streaming video of games, which would have been good to know earlier, but probably would have been choppy and unreliable because of buffering and datastream speeds and all that nonsense. Watching a game in ASCII takes much less bandwidth.

Here’s a more linear, less confusing wrap-up of the game if all the Twitter recapping left you puzzled. (I hear ya’!)