I am in upstate North Carolina this week, though I didn’t know North Carolina had an upstate until they kept mentioning it on the local news. (Upstate weather, next! What’s happening in the upstate? Upstate, upstate, UPSTATE!) My mom is visiting for the week, so we took a road trip to visit the Biltmore estate in Asheville. It’s America’s largest home, has 43 bathrooms, and no public restrooms. (Take your pee break before you enter!) We also just missed getting on local television when they were filming a story about a freakishly huge mushroom found on the grounds.

I thought you guys would be most interested in the recreation areas in the basement of the Biltmore. Here’s the swimming pool: 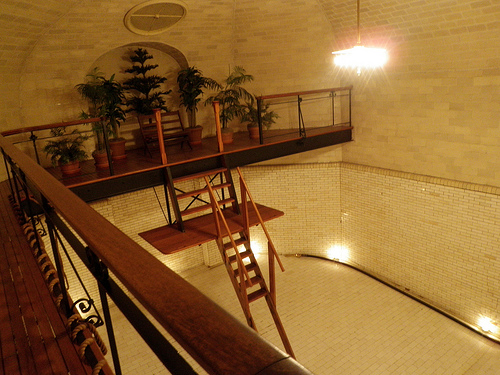 Don’t jump in! There is a noticeable lack of water. The 70,000-gallon pool was heated and had underwater lighting. There are also call buttons near the edge so guests could call for a servant.

And here’s an early 20th-century gym: 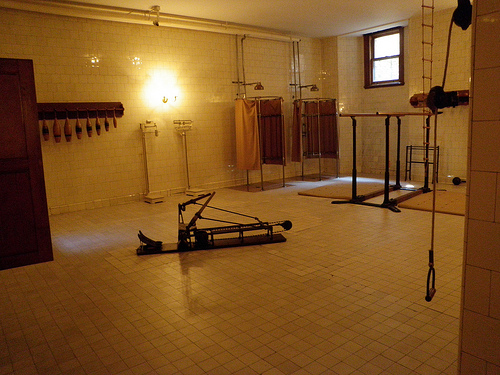 Those wooden pins hanging from the wall made me think George Vanderbilt was a closet juggler, but they’re evidently called Indian clubs. You’re supposed to use wave them around in different patterns for exercise.

If you stop by the Biltmore, I want you to know that Dave the shuttle driver gives the best parking lot tour I’ve ever been on. No joking! (Except for Dave’s joking.) I suppose if you drive in circles all day you either go crazy or develop a comedy routine to keep you sane. Catch Dave’s shuttle if you can!

Earlier: The “Plus Up” Your Gym Bag giveaway winner