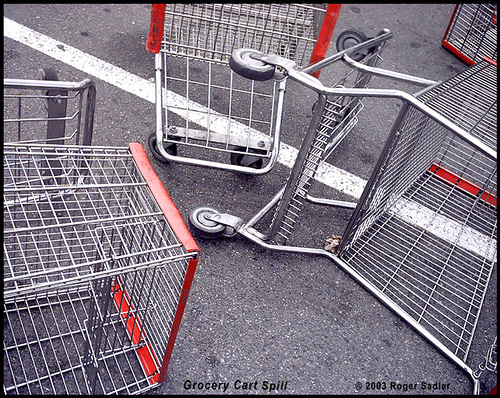 Ever since I started freelancing full-time, I’ve been tracking all my expenses. I like to make sure the money going out isn’t greater than the money going in, because that would be a very bad business plan indeed. (Unless you’re the federal government.) This is how I know that my food/grocery expenses have gone up since I moved from Indianapolis to Chapel Hill, though I don’t exactly know why. The first month I was here, I expected it to go up because I had to buy basic staples that I hadn’t bothered to move across the country, and I had to eat out on the road. But August’s bill was about $40-$70 higher than it averaged in Indy.

I’m not sure if the prices at Harris-Teeter are higher than they were at Kroger. I don’t know if I mooched more food off of my old roommate than I realized. I’m spending more time at coffee shops to get out of my apartment, which has bumped the sum a bit. In college I would always run out of money on my meal card before anybody else, so maybe I just eat more than other people. I dunno.

I don’t like this problem, but I don’t like the solution either, which is to analyze prices, sales, and coupons and plan how to buy things at the cheapest rate. Near Lord, that sounds like so much work. I just want to go to the grocery and get what I need. Waiting for bread to go on sale annoys me. It should be on sale all the time!! I also realize this is an incredibly spoiled attitude. I should be grateful food is abundant and easy to acquire at whatever cost, especially when people starve to death every day on this planet and in popular young adult novels.

I know there are web sites that help you figure out when is the best time to buy things, but again, this sounds like work even if it’s less work than without the lists. You have to strategize and figure out what to stock up on things and make meal plans that match what’s on sale. I guess I’ll just have to get over it and start putting more work into my grocery shopping, but BLEH, I’m still annoyed. I have to work at so many other things in my life—my weight, exercise, blogging, emails, web designing, doctors appointments—I wish I could just go buy food without a huge amount of pre-planning.

On the bright side, at least the cartoon dragon at Harris-Teeter is always here to give me free cookies. (I told you animated creatures were going to start following me to the grocery store!) 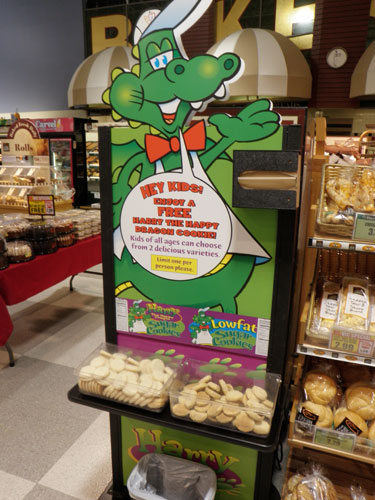 (I know it says they’re just for kids. I am a kid at heart. And I would run over anyone who tries to stop me with my grocery cart, which you have to admit is very childish.)

Earlier: Life in the slow lane