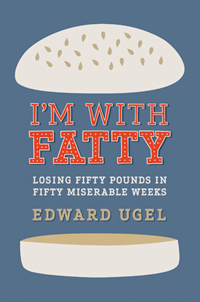 The title of this book made me wary at first, but I decided to give it a chance because I’d heard a segment on This American Life with the author a few years ago that I liked about the topic of his last book, Money for Nothing: One Man’s Journey Through the Dark Side of Lottery Millions. Thankfully, what I got was a light-hearted, self-deprecating, weight-loss memoir written from the male perspective, which is certainly the under-represented gender in weight-loss tales.

Ed Ugel’s weight problem becomes an issue when he gains 43 pounds in a year due to depression brought on by various life problems. After his wife complains of his loud snoring, he’s diagnosed with sleep apnea. His weight-loss is largely motivated by the desire to be rid of the CPAP machine that helps him breathe through the night, but is so uncomfortable and odd-looking that it frightens his daughter.

We follow Ed as he slowly eases into his new routines, loses weight over the holidays, suffers relapses and binges, pretends to order for two in the drive-through, but keeps seeing his trainer, playing racquetball, and struggling through it all in a way most anyone who’s lost weight can relate to. During the process, Ed realizes he’s a food addict who uses food like a drug. Ed is also a foodie, which his dietician says gives him the best chance of keeping the weight off because foodies have the skills to make their meals taste good. Ed’s comments about food addiction vs. being a foodie, and how one doesn’t necessarily mean you’re the other, were particularly interesting.

Superficially, this book reminded me of Jen Lancaster’s Such a Pretty Fat, which is another book that was pitched on the promise that the author would lose weight for it, though Lancaster and Ugel have their own distinct styles. Specifically, there are a lot more poop jokes in this one (it must be a guy thing?), and I admit I skipped the section about colon cleansing because I DID NOT WANT TO KNOW.

Ed was super-kind to take the time to answer a few questions for me below. You can buy I’m With Fatty: Losing Fifty Pounds in Fifty Miserable Weeks at Amazon and visit EdwardUgel.com for more reviews, upcoming book events and more.

Speaking as one author of a weight-loss memoir to another, did you obsess over looking as thin as possible in your author photo like I did? I found myself Googling the phrase “how to look thin in photos” the night before my picture was taken.

Oh. Lord. Yes. Not to mention, once I heard that I was booked on the Today Show…with the HD camera—nightmare. I thought long and hard about wearing a burka to the taping—that or hiring an actor to play the part of Ed Ugel for the national TV audience. Still, in the end, my book is about learning to accept that person looking back at you in the mirror every morning, no matter how many chins he/she might have. Doing all this media and book tour appearances has actually been quite cathartic. Standing there in front of people and saying, “This is me, for better or worse,” has been a long time coming. Frankly, it feels great.

How did you choose the title I’M WITH FATTY? At first glance I thought the title might be intended to bash fat people, but after I read the book I saw it more as a reflection of the negative feelings you had about yourself after your bout with depression and the 40-something-pound weight gain that came with it.

The title of the book is a hard one to wrap my arms around. That word, “FATTY” is so polarizing, so deeply rooted in a lot of folks psychology—especially mine. It’s meant to shock you, to catch your eye, to make you wonder what the heck this book is about. Moreover, it’s also a recognition, an admission of the character I’m often guilty of playing. Hey, look at me, the lovable chubby guy…. If I call myself Fatty, maybe you won’t say it and thus, you won’t hurt me. So, I’ve been with Fatty for a long time. I guess it’s safe to say he’s my alter ego.

Frankly, I think the title of the book may turn some people away from giving it a shot, which is obviously unfortunate. Moreover, I have a hard time with my daughters knowing that word in another context other than a negative one. You see, in our house, we don’t use that word, “fat.” I’m very sensitive to people throwing around a word that is hurtful to many folks—including people in my own life.

In short, I have a certain amount of guilt/baggage about the title. I hope my girls, when they’re older, will understand what I was trying to do with the title. But, it was NEVER meant to bash, hurt, or embarrass heavy people. To the contrary. Heavy folks are my people. And, quite frankly, I feel very protective of people with weight issues.

While you don’t explicitly say this in the book, it’s implied that you sold a book proposal to write about your year of weight loss, which is why the Fatty Project became your job. Accountability is one of the pillars of weight loss, but did this additional pressure to lose weight help or hinder you? Both?

I think it both helped and hindered my year. I was well aware of the fact that this was a very white collar approach to this issue. Most folks can’t take a week, much less a year, to focus on their health. Throw in a personal trainer and nutritionist, and expensive health club etc, and you really run the risk of making my story un-relatable to the average bear out there working full time, trying to make ends meet.

Still, I went to great lengths to make sure folks knew that this book wasn’t a “how to” or a guide to weight loss etc. If anything, this book is a how-not-to. This is a memoir, my story, my year. It’s a candid, unfiltered look into the chaos of my relationship with food and myself. It doesn’t pretend to be anything else.

What I wanted people to relate to wasn’t my method of weight loss, but rather my story, my situation, my emotional mindset. I think that’s why folks are having such a strong reaction to the book. No one is saying that they want to achieve their weight loss goals in the same way I did. They’re laughing at how much of themselves they see in my story.

You write about how your weight was causing tension in your marriage, particularly because of the snoring and sleep apnea it was causing. I sometimes have readers who ask me how they can encourage a spouse to lose weight or at least get them to be supportive of their own weight loss attempts. Do you have any advice about that based on your own experiences?

Do your very best to marry my wife.

I’m lucky to have a patient, psychologically minded, compassionate loving, wife. However, I’ve often said that she’s in quite an unenviable situation. No one wants to police their partner about what they eat. It’s a very touchy thing, telling your husband or wife that they don’t need another serving of potatoes. Those kind of comments are often shaming, embarrassing, and cause for either party to find themselves being stabbed in the hand with a fork.

What finally got me going in the right direction was when my wife was able to show me that my eating was becoming a medical situation. It took her off the hook, so to speak. She wasn’t just nagging me. She was trying to save my life. Finally…with a certain amount of kicking and screaming, I let her help me help myself.

In the few weeks since the book was released, I’ve heard from a few handfuls of men who were drawn to the book because they’d heard it was funny, or had it handed to them by their spouses who all but demanded that they read it. To my great surprise and pleasure, men have ended up walking away with a lot more than they’d bargained for. Men are saying that its both funny and relatable. But they’re also thanking me for giving voice to these issues from a male perspective. There’s a shocking lack of male voices in this arena when it comes to published books etc.

Yes, issues of weight loss and body-image have always been dominated by female writers, TV personalities. But, I think that’s been a disservice to men and women alike. I’ve been praised for giving a male voice to this issue, but there are several male weight loss bloggers who I’ve become aware of, that are writing interesting, thought provoking stuff about their own journeys in this space.

As far as men joining a group like Weight Watchers, all I can say is that it changed my world view about this entire issue. And, I couldn’t have been more wrong in my belief going in that Weight Watchers was a place for women. To the contrary. Men are not only welcome, but we also have a lot to learn about our own body image issues from those very same women with whom we believed we had so little in common.

By the end of your project, you’ve learned new things about yourself, like that you’re a food addict. Do you think you would have come to these realizations without having written the book? Or did writing serve as some sort of therapy, much like weight-loss blogging can be?

Incredible therapy! As you well know, writing, especially long form (books), is a very lonely enterprise. To say the least it’s a marathon and you literally need to train yourself to be able to do it. However, one of the benefits of spending all this time alone is having the luxury of being able to really think about this issue from all the angles. You’re literally being paid to think. And, despite all the things I’ve said about it being lonely and missing having colleagues etc., what a wonderful gift, to be able to look inward like that about something that’s so important to me. Was it therapy? Yes. Would I have come to these conclusions on my own? Perhaps in time. Although, looking at yourself and telling yourself the truth is not one of my strengths. I think I needed the time this book gave me to find my way to those deeper questions…much less the answers.

Ok, seriously, how did you lose weight over the holidays?

Can you believe that? Insane. For me, the holidays came at a time when all hell was breaking loose on this project. As you know from reading the book, I didn’t get out of the gates very well. Frankly, I’d fallen on my tushy a few times and, by the time the holidays came around, I was running out of mulligans. I’d run out of excuses and time. I simply had no choice.

Thanks again for your time, Ed! Good luck with all your book promotions!

Later: The before photo: Kellogg’s “Plus Up Your Gym Bag” makeover