For too long, I had heard tales of the Swedish superstore—the IKEA—without ever setting my eyes upon this big box monument to sleek, flat-packed, affordable furniture. Truly, this was a wrong that needed to be righted. So, it was this noble desire (or my need for a cheap desk set) that led me to rent an SUV two weeks ago and drag Big Brother to Charlotte, North Carolina to visit the closest IKEA store.

To make things harder, the IKEA was not in my Magellan GPS. It then became a race between me and Big Brother to see who could use their smartphone faster to find an intersection near the store to enter instead. (Big Brother won.) 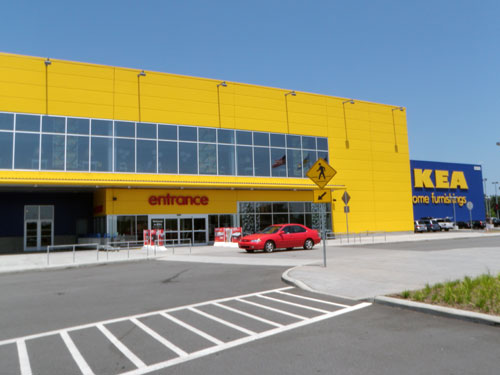 Or, the “KEA” as it would appear to be titled in this photo. It was a huge, blue and yellow store set in a large lot near the highway exit. We headed inside and had lunch in the IKEA cafeteria, because shopping there evidently requires carb-loading beforehand. Why? Because the store NEVER ENDS. 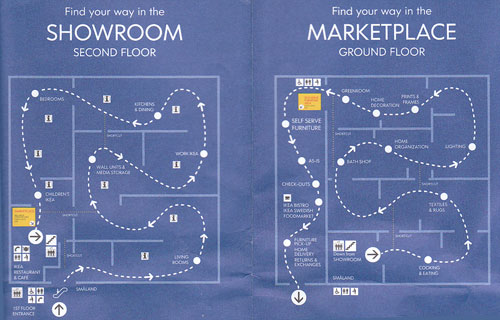 As you can see in the map, IKEA is laid out like a huge, well-furnished, mouse maze. There is no cheese at the end, just the most delicious cinnamon rolls you shall ever taste. Which is far better than cheese, in my opinion. But I get ahead of myself.

To shop at IKEA, they make you walk through the entire store, which explains how I ended up purchasing a colander, a Tupperware set, and a cloth closet organizer, when I only came for a desk set. You see it and you want to buy it! This might also be why IKEA is the only place where I’ve impulsively bought a bookcase. It’s not like grabbing a chocolate bar at the grocery store checkout lane, though they sold chocolate bars here too.

There are no windows in IKEA, so I quickly lost my bearings inside the store, unaware of how far deep I was in the labyrinth. After I had walked down a few halls and turned a few corners, I looked behind me and could have sworn the IKEA employees had moved the walls. If there had been a fire, I honestly wouldn’t have known where to run for the exit.

By the time we got to the end of the maze, I felt like I often do after I’ve been at an art museum for too long. My brain was tired and I didn’t want any more visual input. At the end of IKEA is the warehouse, where you can grab any items you want according to their aisle and bin number. I had written down the numbers of the items I wanted, so Big Brother grabbed a hand cart and used his manly muscles to lift my bookcase and desk set off the shelf. We checked out and Big Brother stayed with the stuff while I got the SUV and pulled it up to the loading area.

Once we had loaded everything, we went back inside to purchase half a dozen cinnamon rolls from the IKEA marketplace. There is nothing about a furniture store that would make me believe they could make the most divine cinnamon-y, sugary pastries I’ve ever tasted, but behold! They were AMAZING. I could almost see myself driving two hours to Charlotte just for them.

In my next entry, I shall attempt to assemble the Swedish puzzle furniture with only my wits, a toolset and the assistance of a cute little cartoon man in the diagram!