The universe loves to toy with me. Evidence? 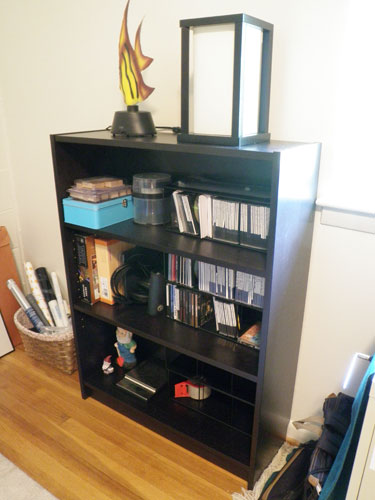 Object #1: The brown/black BILLY bookcase I bought on impulse at IKEA last month for $59.99 (plus tax). 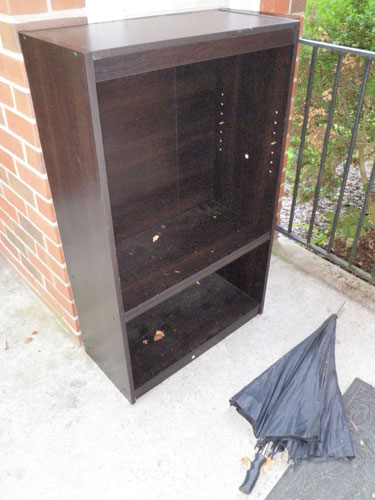 Object #2: The brown/black BILLY bookcase abandoned at the bottom of the stairs outside my apartment 5 days ago. (Note: This is not the same bookcase. They occupy two different areas of the space-time continuum.) I checked the front and back and the shelf notches, and there is no doubt that this is a BILLY bookcase. Looks like he made friends with the abandoned umbrella that has been there since I moved in.

Considering the length of time that this bookcase has been sitting literally at my doorstep, it’s safe to say it’s been abandoned, probably by the college students who were moving out this week. Soooooo, if I had not been so impulsive at IKEA, I could have scooped up BILLY 1’s twin brother, BILLY 2, for free. As it is, I’m probably going to grab BILLY 2 and put him in the kitchen to use as a huge spice rack.

I would really like to know what the probability of something like this happening is. Yes, there are probably thousands of BILLY the bookcases in the world, if not millions. But seriously? The same color? The same size? Only a month after my first trip to IKEA? So totally bizarre. If this were a plot element in a novel I would say it should be rewritten because it’s impossible to believe.

On a totally different note, if you were wondering who won the Omron Pace/Distance Tracker, it was Shelley from Boston who has already claimed her prize. Thanks to everyone who entered! Don’t feel bad if you didn’t win. At least you didn’t spend over $60 on a bookcase the universe decided to give you for free.

Later: Visiting the farmers market for I Can’t Believe It’s Not Butter