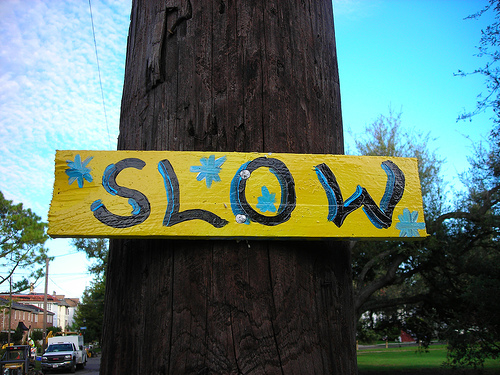 I haven’t posted a new entry for over a week now, which might be a record for me. There were moments in the past week when I thought, “I should post something. People will wonder if that IKEA bookcase I assembled fell over and crushed me dead.” But then my next thought was, “What should I write about?” and the honest answer was, “I don’t have anything I care enough to write about right now.” Sure, I’ve got dozens of little notes saved for post ideas, many of which are worth writing about eventually. But during each moment I thought about posting last week, nothing seemed so immediately important that I had to write a blog entry about it RIGHT NOW.

Certainly, there is something to be said for writing when you don’t feel like it. If you want to be a professional writer, you’ll spend plenty of time writing when you don’t want to. That’s why it’s a job, because it’s actual work. However, I feel that bloggers feel extra pressure to produce something daily, quickly, endlessly, or else we’re told we’ll lose all our visitors and our pagerank will decrease and no one will care about our blogs anymore. There have certainly been times when I have posted entries out of fear of losing everything I’ve worked hard to build. Those quick and dirty entries are sometimes funny and good, but sometimes they’re kinda’ shit. And I don’t want to be shitting on the Internet.

So, for this past week, I decided to keep my mouth closed and my fingers still. And it was good. I didn’t pop in to tell people, “Gee whiz, I haven’t posted for awhile, have I?” because I figured you are observant enough to notice that without me commenting on it. And commenting on it serves no purpose, other than to give into that fear of being un-Google-able, which seems like a silly thing to be afraid of. Spiders? Sure. Low Google search results? Eh, have you ever had a nightmare involving your pagerank? (If yes, you should probably keep that to yourself.)

This attitude towards my blog is something I hope to continue. I want to stress quality over quantity. I stopped checking my web stats several months ago because I got sick of wondering if people were visiting my blog and where they were coming from and all that rigmarole that is so easy to get sucked into. I’ve been blogging for over 5 years now, and I feel like I’m getting too old for that shit. I’ve seen my stats go up, and then down, and then up again, and then down again, and then…you get the picture. There was certainly a time when I chased pageviews and hoped for more visitors, but I feel like I’ve been there, done that. Yeah, having lots of visitors can be fun and it’s got its own advantages, but it’s got disadvantages too. When I think about what I’d like this blog to be, I’d rather that it be well-written, thoughtful and entertaining than it be published daily and have a bazillion readers a month. If I want it to be the former, I can’t really think about the latter.

This type of philosophy has been around for awhile, typically referred to as the “Slow Blogging” movement. The term is partly a reference to Alice Waters’ slow food movement which emphasizes cooking quality meals that take time rather than consuming fast food that is quick but less nutritious. You can read a New York Times article about slow blogging from 2008, and a slow blogging manifesto here, though I prefer the one listed in the sidebar of this blog which says:

1. Slow blogs are well written (the writing would still be considered good had it not been not published on the internet)
2. Slow blogs are focused on content over format
3. Slow blogs celebrate authenticity
4. Slow blog writers don’t feel restrained by formulas
5. Slow blogs posts are sometimes long
6. Slow blogs are original (not composed of mostly recycled material)
7. Slow blogs do not have, as their primary aim, the goal of selling things
8. Slow blogs are not unfairly critical of bloggers with different agendas. It’s still a free world.
9. Slow blogs encourage community building
10. Slow blogs are worth the time

None of this is to say I’m going to try to drive visitors away from my blog either. I’m not going to stop certain posting habits I like that I also know are considered to help increase readership. I’ve been trying to post a picture with most of my posts lately because it makes the entry look more enticing and readable. I think this increases the quality of my posts, so I’m going to still do it, regardless of whether it brings more readers or not.

It also does NOT mean I’m going to write posts weeks and weeks in advance and revise them heavily before posting. Blogs do tend to be in the moment, and I don’t have a problem writing something in the moment like some of the slow bloggers seem to.

I can guarantee there will still be typos.

Earlier: 17 observations about my move to Chapel Hill, North Carolina