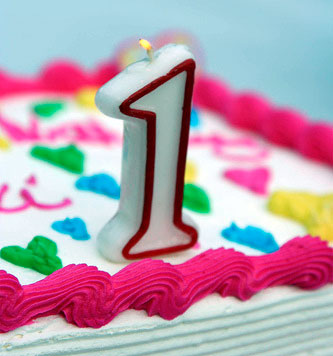 One year ago was the last time I got up at 7:00am to drive to the full-time job I enjoyed so much that it made me want to freelance full-time. (Lesson learned: Me and big corporations do not mix.) July 8th, 2009 was a Wednesday. I’d originally intended to give my notice on a Friday, but I got halfway through the week and just couldn’t take it anymore. Some problem I can’t remember sprung up at the beginning of the day and I started thinking, What the hell am I waiting for? So, I walked into the boss’s office and said good-bye.

I know a lot of people fantasize about doing that and imagine it as a gleeful moment of emancipation. While I was definitely happy with my decision, the actual moment of resigning was a scary swirl of emotions, like good feelings and bad feelings had collided like high pressure fronts and low pressure fronts, creating an emotional tornado. I instant-messaged my best friend at work, telling her, “OK, I’m going to do it. Wish me luck.” Then I got up and headed to the office like a walking Jell-O mold, quivering inside with the knowledge of what I was about to do.

Once you turn in that resignation letter, you’ve crossed the point of no return. I almost felt like I was about to rob a bank or break into someone’s house. I was going to commit an act I could not easily undo. Yeah, I was certain I wanted to do it, but I also knew I could be broke and unemployed a year later if things didn’t work out right. Plus, my boss was a nice guy, and I felt bad that my departure would put a strain on the department. Granted, I didn’t feel bad enough about it to stay though.

I entered the office, closed the door and stumbled through my prepared speech. My boss understood where I was coming from, even if he wasn’t thrilled to see me leave. And then, God dammit, my eyes got a little bit too full of salt water and an itty-bitty tear slinked down my cheek. Damn you, emotions! Why must you make me look weak and girly?!

Two weeks later, we had my going-away party and then I was on my own. I woke up the next day at eight o’clock, cooked some oatmeal and made some coffee, establishing a new routine, the morning ritual of a real-life freelancer. Than I got on my computer and started figuring things out. And here I am, 12 months later, still not broke! I’m happy not to be living under a bridge, especially since it’s hard to steal a wi-fi signal through concrete. I still feel a bit weird telling people I am a freelancer, as if I’m telling them I’m a traveling gypsy or a circus performer. As if they’ll say, “Really? People actually do that?” Still, it feels less strange than telling people I’m a writer, which always seems a tad pretentious to me, though I should probably get over that already.

When I look back over the past few years, I can see that the moment I really started to take charge of my life was back in 2005 when I started to lose 200 pounds. I don’t believe you have to be thin to be happy, but spending two years working towards a seemingly impossible goal and actually getting there made me feel like a lot of other stuff was possible that used to seem impossible. So, even though I’ve gained back some of the weight I lost, I haven’t lost that feeling that I can steer my life the direction I want to. I quit my job. I moved to a different town. Dunno what I’ll do next, but I know I can do it, whatever it is.

I must say, you guys have been instrumental in allowing me to establish this new lifestyle. I’ve gotten tons of referrals from people who read my blog or who I’ve met through blogging. This little blog here has let me do a lot of amazing things, and I’m so grateful to everyone who has helped make it happen. Big thanks to my Internet peeps!

K, now back to work.

Later: 17 observations about my move to Chapel Hill, North Carolina